It is with a very sad heart that we share with you that Laura Eskandarion of the LB School of Self Defense has passed away.

Laura passed away Monday, December 16, 2013 at her home in rural Wellington, Kansas at the age of 50.

Laura Eskandarion was born the daughter of Raymond and Mary (Johnson) Graham on Thursday, February 7, 1963 in Wichita, Kansas.

On February 12, 2000, Laura and Burt Eskandarion were united in marriage in Wichita, Kansas. Together they celebrated over 13 years of marriage.

Laura worked at Boeing Aircraft in Wichita, Kansas for 11 years; however, she eventually left to pursue her lifelong dream of operating a karate school. With the support of her family, she and Burt opened the LB School of Defense in Wellington on February 16, 2008. Laura was dedicated to the school and students and considered them all a part of the family. 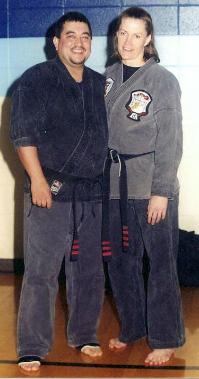 Both Laura and Bert served as senior instructors as Si-Bok Tom Kelly’s Kenpo Karate studio for over 11 years.

When not at work, she loved her life on the farm. Laura enjoyed being outdoors with her cats, dogs and chickens. She especially looked forward to riding horses and hunting pheasant in South Dakota.

She was preceded in death by her mother, Mary Graham and her uncle, Clemet Johnson.

Memorials have been established in her loving memory with MD Anderson Cancer Center Children’s Cancer Hospital, P.O. Box 4486, Houston, TX 77210-4486. Contributions can be mailed or left with the funeral home.

To share a memory or leave condolences, please visit www.dayfuneralhome.info.