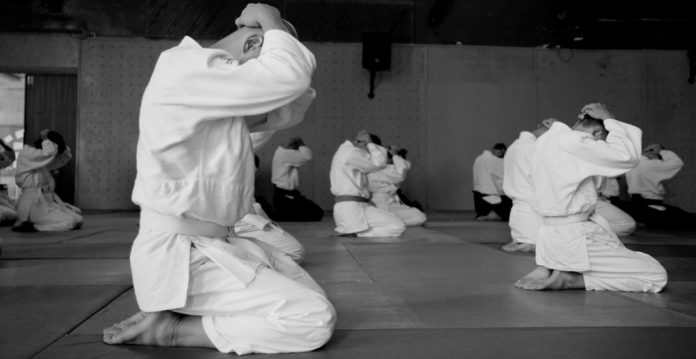 The normalized commercialization of martial arts (Budo) may oblige an ambitious instructor to navigate ethical challenges and the dynamics of compromise. This applies particularly to anyone seeking financial gain from competitive martial arts; the most prolific facet of Budo. Contrary to widespread perceptions; public martial arts instruction is a fairly recent phenomenon.

For illustrative purposes, I present the example of Okinawan Karate, formerly called Te, Toudi and Kenpo. Prior to the transformative Meiji restoration of the mid-nineteenth century, all Japanese/Okinawan martial arts training was the sole preserve of the aristocracy, military and civil law enforcement classes. The new term Budo gradually came to replace the older word Bujutsu; formerly used to describe elite combat arts and law enforcement tactics. Feudal Japan’s numerous sword fighting schools, for example; were off limits to any but the samurai class.

Budo refers to the “way” of martial arts; an umbrella term to describe the delicate balance of physical, philosophical and moral facets in Japan’s modern family of revised martial arts; modified for the general public as cultural recreation and sports. A popular example is the martial sport of Judo; a gentler version of Jujutsu. Japan’s Meiji-era Bujutsu to Budo transformation also effected China and Korea; two nations destined to experience a Japanese domination that in the Korean case; influenced the nature of a modern art: Tae Known Do.

In Okinawa’s pre-war period, for example; martial art practice and instruction was conducted privately among the male members of elite families. The wholesale destruction and economic ruin wrought by the war prompted Okinawan masters to commercialize a simplified version of their complex art for the occupying American military after General MacArthur’s martial arts ban was lifted in early 1950.

The U.S. soldiers and marines were unaware that they were learning the basic Karate system taught to Okinawan school children as a form of group exercise. The children’s version intentionally deleted the combative lessons reinforced by Kata, or simulated solo combat. Both the creation of new Kata and the absence of combative context inspired haphazard interpretations that persist in today’s dojos. Not surprisingly, these Chinese-trained Okinawan experts did not reveal their deadly system of Kyusho Jutsu or pressure point fighting to outsiders. They were motivated by cultural pride, ethical concerns and a natural resentment of the foreigners occupying their ancient homeland.

Were Okinawan Karate masters of the early 20th Century magically transported to a 2016 commercial dojo in Canada; they would not likely recognize the activity before them as genuine martial art. Their concerns would extend beyond the very casual and public nature of the learning environment and they might well be puzzled about the instructors’ motives and philosophical beliefs. Questions of ethics and compromise might also arise in their minds upon noting the clever advertising and sales tactics.

Increasingly, since ethics and compromise are governed by flexible interpretations; many teachers feel free to operate commercially behind bold advertising incorporating fluid interpretations of Buddhism and Taoism. This creates contradictions and cognitive dissonance because traditional Asian martial systems are generally supported by profound spiritual and philosophical concepts like perseverance, sacrifice, patience and mutual respect. The latter notions, while not antithetical to commercial success; were developed for other purposes.

Therefore, excessive flexibility may blur the border between solid reality and commercial expediency. The subtle erosion of technical and ethical standards is eventually minimized by the considerable appeal of financial gain. Unfortunately, careful adherence to ancient spiritual philosophies may be perceived as eccentric or even foolish when such a practitioner is compared to one who employs expedient practices to create a chain of commercial schools along franchise lines.

Fortunately; a broadly-informed idealism may enhance one’s ethical perspective and increase the likelihood of lifetime participation in martial arts. Conversely, the employment of utilitarian expediency offers easy justification for any scheme and provides a weak foundation for permanence. The prevalence and normalization of ill-considered compromise and expediency makes such a course all the more tempting for those who exist within hierarchical social structures where reward and punishment is a permanent organizational dynamic under capricious leadership.

While Asian martial arts are now ubiquitous; all nations and indigenous people with a military history have developed sophisticated martial systems supported by spiritual or religious beliefs. For example, the fighting arts of North American native tribes; along with the people of ancient Greece, Rome and India all featured a profound spiritual or ethical dimension.

…the traditional arts teach all those intangibles that are so important to society-things like respect, humility and the appropriate use of violence. I feel that as mixed martial artists we have walked away from that, and we need to get back to it. We need to understand that traditional martial arts has a lot to teach us. For mixed martial arts to survive, it has to be socially viable.

Jackson’s thoughtful remarks were offered in the context of public misconceptions about MMA created by the negative conduct of a few noted competitors in the wake of the sport’s massive commercial success and global popularity. Perhaps the MMA world is approaching in the mature third level of organizational Shu Ha Ri; the Budo concept of life’s three developmental stages.

In his article, The Effect of Modern Marketing on Martial Arts and Traditional Martial Arts Culture, Joseph D. McNamara writes:

Some instructors believe martial arts schools and organizations ought to collect only enough money to cover operating expenses. These purists consider deliberate profit-seeking an affront to the spirit of Budo; leading eventually to ethical and technical compromise. This model includes schools where the instructor earns their living elsewhere and the school operates like a cooperative. Such Budo organizations often use public schools and community centres to minimize costs and encourage participation by low-income students unable to pay the higher rates at fully-commercial clubs. Ironically, they are often obliged to compete within these public forums with franchise organizations offering bargain rate instruction for public relations purposes.

After considering these factors, it is still possible to realize an ethical profit as a martial arts instructor if one educates students about the reality of martial arts and the benefits of patient, methodical training. The best teachers are pleased to see students eagerly exploring the wider world of martial arts, including competition and public demonstrations. It is tempting to present one’s art as superior and comprehensive or even to discourage students from broadening their technical base through cross-training in other disciplines. This temptation is especially strong when one is financially-dependent on martial arts revenue and a well-developed “brand” that purports to answer every need.

As McNamara noted, our consumer culture encourages people to see martial arts as a business transaction where the payment of fees will automatically produce results. Therefore, it is not unreasonable for neophyte students to entertain unrealistic notions about martial arts progress. Setting high technical and behavioral standards for rank promotion tends to limit the potential for profit, depending on students’ nature and motivation level. Therefore, we witness excessively-rapid promotion and even the awarding of black belt rank to children as young as ten years. In some cases, politicians accept honorary black belts from commercial schools eager to develop beneficial relationships with power brokers.

Because of these pressures, our values have changed greatly. Teachers must now expect less from students, and students quite a bit more from their teacher-or off they go, shopping around for the next school with more to offer. Ultimately, we become so concerned with receiving more and more that we lose sight of the actual process of training and learning.

The idealized martial arts path combines a disciplined regime of meditative introspection, solo practice and regular interaction with teachers and fellows students. The vital role of a genuine teacher cannot be overstated. In response to inquiries following his resignation from the Canada Chito Kai and rumored tensions with founder Tsuyoshi Chitose; Canadian Karate pioneer Masami Tsurouka said, “I have only one sensei and I will live and die with only one.” Sensei Tsurouka was exemplifying the notion that, while he was now independent; he intended to honor the spirit of Chitose’s Karate in his future activities as a national martial arts leader.

The darker side of achieving senior Budo rank is largely ignored or minimized by those seeking such honors or playing a support role in martial arts politics. Beyond that, the significance of senior rank (fifth Dan black belt and above) and classical titles of Renshi, Kyoshi and Hanshi have been diminished by ego, commerce and the global proliferation of martial arts. For instance, due to differing standards and technical requirement, one organization’s Renshi cadre may be vastly more skilled and experienced than that of another organization where the title is conferred for different, but equally valid reasons. Of course, for better or worse; such standards reflect unique traditions and the leaders’ personalities and philosophical perspectives.

Like all hierarchical structures; Budo organizations feature a stratified system of rank and associated titles designed to mark technical skill, pedagogical experience, competitive success, dedication and loyalty. Ideally, the system functions to provide balance and continuity in the intensely competitive Budo environment. Unfortunately, the rank/title system may suffer the hazards of ego-driven ambition when personal loyalty is excessively-esteemed. The unfortunate inconsistencies of nepotistic elevation encourages rank-based misconceptions and the false assumption that senior rank automatically means superior technical skills, pedagogical ability and comprehensive knowledge of relevant history and philosophy. Since the latter set of accomplishments forms the basis of a master’s competent critique of their student’s progress; genuine expertise is essential.

In Okinawan/Japanese Budo systems it often happens that lower-ranked but highly competent instructors are not taken seriously by senior ranks even when the junior-ranked instructor possesses superior technical and pedagogical skill due to the higher relative quality, intensity and consistency of their learning. Therefore, it is rare for senior martial artists to accept instruction from lower-ranked teachers either in regular classes or at seminars due to factors of ego, reputation or commercial considerations. While exceptions exist, Budo’s organizational culture tends to assume that skill automatically increases with rank and age.

The acceptance of rank and title from a senior instructor may present an ethical quandary for aspiring martial artists whose legitimate ambition forces them to acknowledge the public relations value of the status inferred by the promotion. This is particularly true when the junior rank privately acknowledges the gulf between their superior’s public and private behavior. It is tempting for a person in such circumstances to rationalize falsely as they conduct a cost benefit analysis of continued association with said instructor. These rationalizations include a naïve belief in personal immunity to corrupting influences; the senior’s technical expertise, their affiliation with elite governing bodies and self-arguments to the effect that managing a large Budo organization requires harsh and even Machiavellian tactics.

While these factors are true to a certain extent, we are all affected and judged by our associations and it is impossible to avoid the negative consequences of habitual self-deception. Denial will surely undermine our spiritual foundations. Honest self-appraisal and correction through a clear and penetrating perception will defeat ego-driven distractions like envy and vanity. This is applies to all areas of human endeavour involving the combination of solitary and interpersonal effort. Those who tread the Budo path with persistence and humility are exemplars of realized human potential.

Sensei Duchesney is a long-time member of the World Congress Shintani Wado Kai Karate and the Canadian Karate Association. He also serves as a senior instructor at Sensei Richard and Don Ouellette’s Inner Hero Martial Arts.