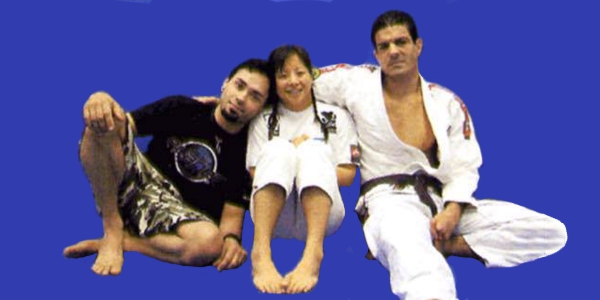 Felicia Oh was born on December 13, 1967 in Seattle, Washington and grew up there. She moved to Los Angeles to attend graduate school at UCLA where she continues to live.

Felicia Oh was introduced to Brazilian Jiu-Jitsu by her friend’s husband. Intrigued by the notion that technique and skill could overcome size and strength, she went to watch a class. She signed up and started training the next day.

Felicia has since dominated many national competitions and was awarded her Black Belt by Jean Jacques Machado after only 4.5 years – an achievement that has left many of her male training partners both envious and struggling to keep up.

In 2007, Felicia became the first woman to win both the Pan American Jiu Jitsu Black Belt Gi and No-Gi divisions. After winning the ADCC North American Trials and securing her spot to represent the United States at the ADCC World Submission Wrestling Championship, she had convincing victories over a multi-time BJJ World Champion and a Japanese superstar which put her in the finals of the most prestigious grappling event in the world. 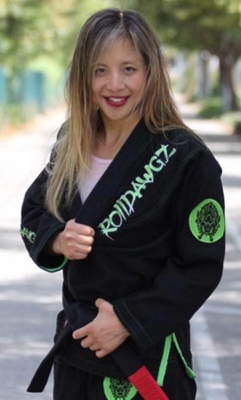 By the end of 2007 Felicia found that she had contracted a viral infection (Epstein-Barr) and chronic fatigue was one of the virus’ symptoms. For 2 years Felicia push through the illness trying to train, eventually she realized she needed a break. In 2014 Oh returned to competition at the World Masters (IBJJF). The joy of competition helped Felicia Oh to return to training.

Throughout the 2000’s decade Felicia Oh was a jiu jitsu journalist and TV personality. She began her career writing for the ADCombat website which was owned by the ADCC organization. In 2004, at the start of GrappleTV, Felicia Oh became the face of the company’s video venture. She spent a few years in front of the cameras, interviewing some of the bigger names in the California grappling scene, before she relocated and her co-host Cindy Omatsu took over. Cynthia Omatsu was the first female grappler outside of Brazil to reach the rank of Black Belt in Brazilian jiu jitsu (2002).

In addition to teaching at Otis College of Art and Design, Felicia Oh is also a certified Kettlebell instructor.

In addition to a BJJ Black Belt, Felicia is Crossfit certified, a certified Kettlebell instructor under RKC and AKC as well as a Fightwall Certified trainer.

Felicia Oh teaches and trains at Big John McCarthy’s Ultimate Training Academy. She is an assistant coach of the BJMUTA Fight Team. In her teaching she emphasis personal improvement – physical, psychological, emotional and technical – and she teaches in the safest and most effective way possible. She believes that while there is competition, the competition is ultimately with yourself.