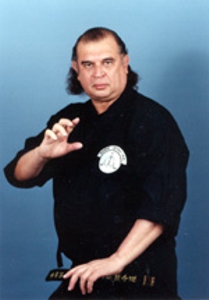 Feliciano Ferreira, known as Kimo, founder of Kempo-Jutsu, was born on November 20, 1949 in Oakland, California. Three months after he was born, the family moved to Hawaii where he spent the rest of his childhood. It was there that he was introduced to martial arts. His grandmother had sent Feliciano Ferreira to a nearby Kempo-Karate dojo when he was 6 years old, so that he could confront his physical weakness. In his early childhood Feliciano Ferreira suffered from asthma. But as he trained at the dojo, he became stronger both physically and mentally. He became a Shodan in 1968 at the age of 19.

Following the year that he became a Shodan, Professor Feliciano Ferreira was drafted for service. In his years in the army, Professor Ferreira was stationed in Vietnam, Panama, Germany and Korea. He was in the forefront of the U.S. forces in Vietnam and took on many special operations, often risking his life. During his times of service, Feliciano Ferreira came into contact with various indigenous martial arts that he observed and learned.

USAdojo - October 4, 2007
We use cookies to ensure that we give you the best experience on our website. If you continue to use this site we will assume that you are happy with it.OkRead more