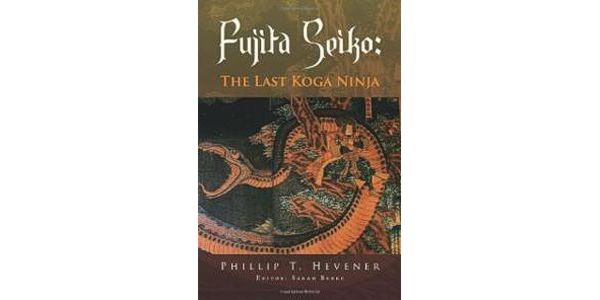 Summary
In the forty years since his death, Fujita Seiko has been a man of mystery, rumor and conjecture. Little of substance existed to bring the facts of his career to life, yet all agree that he made his mark by claiming to be the “last ninja.” Now, Hevener brings Fujita’s career to life in Fujita Seiko The Last Koga Ninja. Here, for the first time, you will learn of Fujita’s early training, his role during World War II, and the high regard with which his contemporaries held his abilities and accomplishments. Ultimately, you will learn of the fate of his martial arts legacy, including his mysterious and controversial Wada-ha Koga-ryu ninjutsu.

More About the Book
In the western martial arts community the subject of Fujita Seiko, the reputed 14th soke of the Koga Ryu Wada Ha family of Ninjutsu, has always been a source of mystery and debate. The available information is at best sparse, and much of it is based entirely upon hearsay, put forward by parties that had a great deal to gain by the popularity of the art, when Ninjutsu was first introduced to the west by the Ninjutsu pioneer, Stephen K. Hayes. This fact has led to charges and countercharges that several of the individuals involved in the practice of Ninjutsu were charlatans or embellishers, and has continued without resolution to this day.

Unfortunately for those interested in the topic of Ninjutsu, most of the available documentation in the English language is authored by the various parties claiming historical authenticity of the purported Ninjutsu lineages that they themselves, benefit by teaching. This state of affairs allows the competing parties to simply dismiss their various critics as being motivated by a desire to drive their Ninjutsu competition from the market, and thus reap the benefits of being the sole source of the art. These circumstances are obviously undesirable, for anyone trying to arrive at an impartial resolution based upon historical fact.

To this end, this paper was written using resources that were collected by independent researchers, to the exclusion of those resources authored by individuals who were or are currently members of the competing Ninjutsu organizations. Additionally, where possible, every effort has been made to emphasize sources from the historical record that predate the American ninja boom of the 1980’s, with the intention of helping the reader arrive at the facts as they existed before the popularity of the art provided economic motivation for interested individuals to distort the facts.

About The Author
The author, Phillip T. Hevener, has more than 30 years of training in the martial arts, including 14 years in the ninjutsu-related arts. Mr. Hevener holds a Shidoshi license from Dr. Masaaki Hatsumi, the Grandmaster of the Bujinkan Dojo, and was exposed to the practice of Satto-ryu Kempo while researching this project. Professionally, he is an executive with a major international bank. Mr. Hevener is also an avid outdoorsman who recently climbed Mount Roraima and Mount Kilimanjaro. Books: Fujita Seiko (The Last Koga Ninja)