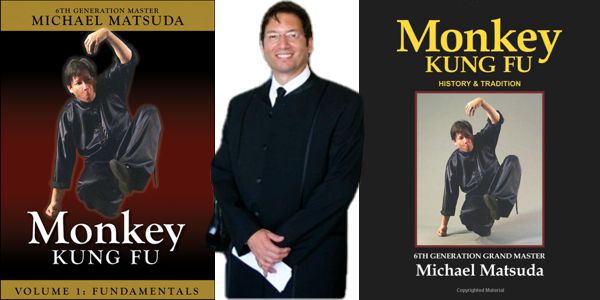 For the first time in nearly 10 years, an historical look at the rare and secretive art of Monkey Kung Fu is now revealed. Sixth generation Monkey Kung Fu Master Michael Matsuda, considered one of the leading historians and authorities on the monkey art, gives you a complete, detailed look at real Monkey style kung fu.

Master Michael Matsuda, who has studied the art of Monkey or Tai Shing Pek Kwar for nearly 30 years, has authored two previous books on the art however; this new book is a comprehensive look at the art. If there was ever a question about Tai Shing or other monkey arts such as Shaolin Monkey or Wu Shu Monkey, this book will explain the differences.

Master Michael Matsuda was inducted into the Martial Arts History Museum’s Hall of Fame in 2004. “As the full author of this book I felt it was my duty to provide a real outlook on the art as a powerful and brutal artform. This art has been mastered by only two people in America and I am the only active teacher of this art, therefore, I want to keep it alive and pass it on to as many people who want to learn the art,” notes Master Michael Matsuda.

“This is real monkey so you won’t be putting your butt to your face or doing contortionist movements, it will tell you how real monkey kung fu was created, what it means, how a real monkey practitioner fights and more,” adds Master Michael Matsuda.

Throughout the 218 page book, the largest ever printed on the art, it will reveal everything you ever wanted to learn about Monkey kung fu but where afraid to ask. This includes the uniforms, the actual monkey silver staff and how to create it, the formation of the five monkey characteristics (lost, tall, drunken, wooden and stone), monkey weaponry, how to tell the difference between Tai Shing, Shaolin and Wu Shu monkey and more.

“I cannot stress how detailed this book is. Without the printing of this book, the art to the American audience will be lost,” notes the American Master. “I’m putting 30 years of knowledge into a host of detailed training DVDs, this book on the monkey history, a release of training manuals and even a teacher certification. I want this art to carry on in America and without my documentation it won’t happen.”

Listed for $29.95, the Monkey Kung Fu book is something anyone ever interested in the monkey art should have in his or her library. From the founder of the art, Grand Master Kou Sze to today’s American Master Michael Matsuda, the reader will get an insight into this art like never before.

“There’s no one else out there who has mastered and learned this entire art in America and is actively teaching it. And this I feel is really a shame,” says Michael Matsuda. “I hope you will considered learning this art and nothing would thrill me more than having a host of 7th generation masters in this secretive art.”

For further information on the book or the training DVDs, visit www.Monkeykungfu.com.

We’re introducing our extremely detailed DVDs, excellent for learning anywhere. They are designed so that  you can learn this entire artform.