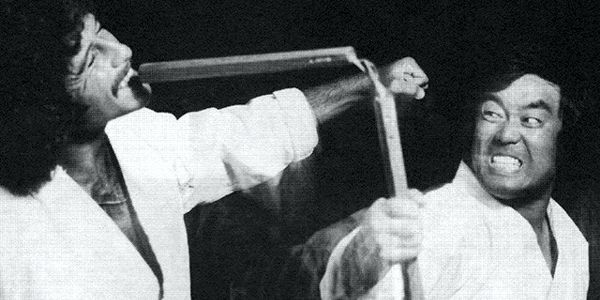 Fumio Demura, a master in Shito-ryu karate and kubodo, won many tournaments in his homeland of Japan, culminating in his being named All Japan Karate Champion. His teachers were some of the most respected instructors in the annuals of the martial arts: Mr. Asano, Master Ryusho Sakagamo, Master Teruo Hayashi Master Chibana and Master Akamine to name but a few.

In 1965 Demura moved to the United States where he teamed up with martial artist Dan Ivan. Together they opened successful chain of karate studios in Orange County California.

The personable Fumio Demura quickly established himself as America’s first karate performer. For almost a decade he choreographed and stared in what has been called the best live martial arts show ever produced. Every week thousands of spectators filed into the Japanese Village Deer Park in Buena Park California to watch Fumio and his team in action. At one point in the show Demura would do a front kick to his opponents chin, holding the technique in picture perfect form for more than 30 seconds.

Master Fumio Demura’s flawless execution of punches, kicks, and weapons left the audience hungry for more. Eventually Master Demura took his show on the road. It was standing room only in Vegas, Paris, Germany Boston, Los Angeles and beyond. In addition to introducing his art to the public, Master Demura also educated his audiences about the martial arts. Not only was his show entertaining but it was written in such a way that it outlined the history of the art and detailed the evolution of various karate techniques and weapons.

Master Fumio Demura was quickly snatched up by Hollywood and has appeared in hundreds of movies and television programs. They include: Karate Kid (1, II, III), The Island of Dr. Moreau, Mortal Kombat, Rising Sun, Showdown in Little Tokyo, Power Rangers, and Hocus Pocus, to name a few.

Master Fumio Demura is widely recognized as one of the premier weapons experts in the world. His skill with the sai, bo, and nunchaku are unsurpassed. He has authored books on the Kama, Nunchaku, Tonfa, Bo, and Sai. In addition to these Ohara Publications, Master Demura has produced videos on weapons and forms for Warner Brothers Home Video and Ohara Publications.