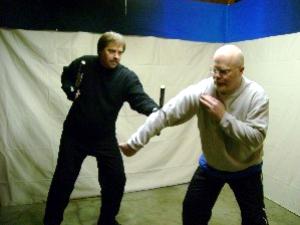 In this interview martial arts expert and author Guro Michael Schwarz shares with us information about the deady Serrada Escrima proven bladed martial arts system. His picture driven and well described step by step book gives even the novice an opportunity to learn some of this devastating art of self-defense and combat . . .

Thank you for taking the time to grant me this interview. I know from conversations we’ve had what a busy schedule you have promoting both the martial arts and your martial arts and self-defense products and services. May I call you Mike sir?

R: Can you tell my readers how you first became involved in martial arts?

Michael Schwarz: My father was an old school boxer/golden gloves I believe. Although he had long given up his training due to family & professional obligations, he often encouraged my athletic pursuits, whatever they were. 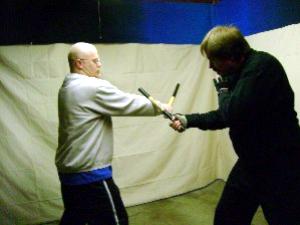 It was shortly after I’d seen my 1st Bruce Lee movie of course, that I had initial interest in what martial arts was all about. But truthfully, it was the 1st Billy Jack movie that really peaked my desire.

I bugged the heck out of my mother & father till finally we found a TKD/Hapkido school in a near by town. Now you have to realize that I grew up in a very rural part of Southwestern Illinois & the nearest “big town” was 30 minutes away. By today’s standard it is not far, but in 1974 – 1979 it was quite far. Although my father did not see the value in a “foreign combat art”, my mother finally got him to concede, and the real “love of my life” was discovered.

R: Have you trained in more than one martial art? 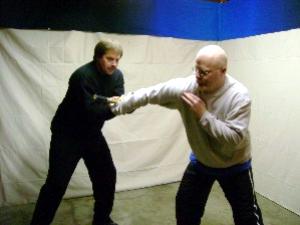 Michael Schwarz: My initial training as I indicated was in Moo Du Kwan Tae Kwon Do/ Hapkido/Judo. After 10 years within TKD/Hapkido, I pursued Goju Ryu Naha Te, Aikijitsu & then I came upon the arts which I have dedicated the past 25 yrs to in Filipino Martial Arts; 19 yrs of which have been dedicated to Cabales Serrada Escrima & it’s propagation.

R: How long have you been training now?

R: Have you been in any situations where you’ve had to use your martial arts skills?

R: What is escrima?

R: You belong to the Word Serrada Escrima Federation. Does this mean there’s different styles of escrima?

R: You recently authored Fundamentals of WSEF Serrada Escrima. What prompted you to write this book?

Michael Schwarz: I have been given a gift by my instructors with in Cabales Serrada Escrima, but we have all been given this gift by GGM Angel Cabales by his creation of this system. It is in recognition of this gift & my desire to promote & propagate the system that has driven me to write this & additional manuals, as well as produce instructional curriculum dvds. 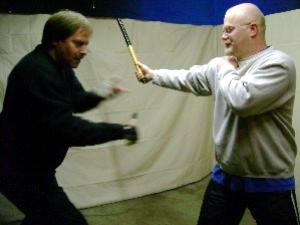 R: I remember consulting with you on this book. I hope I was of some minor help. It’s very picture driven. It
must have taken you a long time to both write the text and get the pictures just the way you wanted them.

Michael Schwarz: Indeed it did. Actually you were of great help & thank you very much. It was actually much easier to have the pictures taken, edit & compile them, rather than actually write the text. Writing the text actually required thinking about what I was doing…lol

R: Can you give us some details about Fundamentals of WSEF Serrada Escrima? 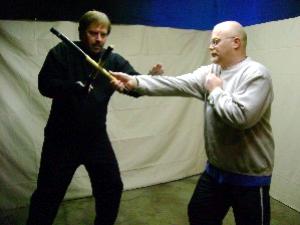 GGM Angel Cabales is responsible beginning in 1966, for the emergence of Filipino martial arts in America, and also, that he is officially considered to be the “Father of Escrima in America” as well. In 1991, GGM Angel Cabales was named by ‘Black Belt Magazine’ as “Weapons Instructor of the Year”.

R: Mike I understand you’ve granted me permission give a preview of your book to my readers. I’d like to thank
you for that as well as taking your time from your busy schedule to grant me this interview.