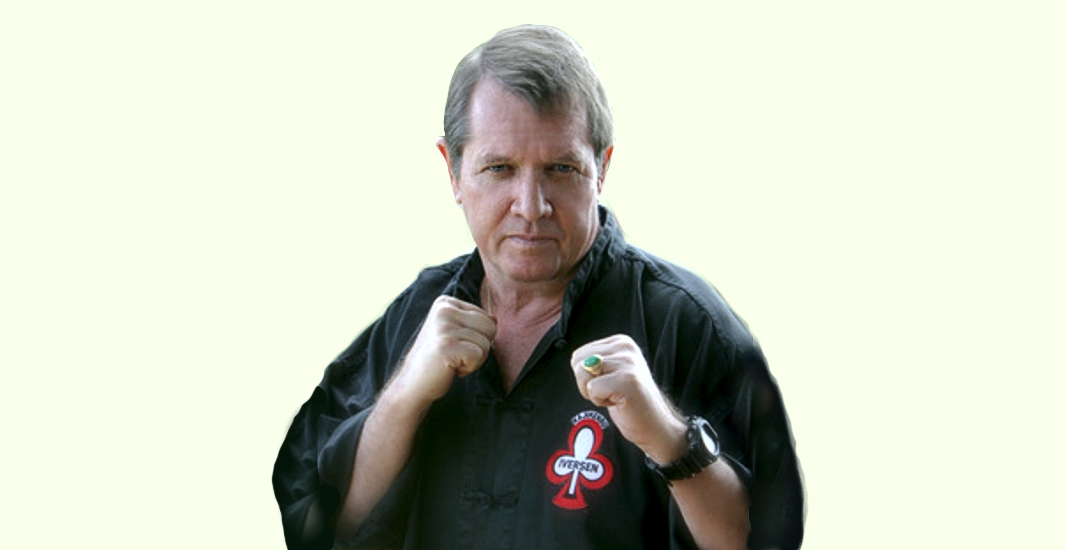 Professor George Iversen has been a student and teacher of Kajukenbo since 1961.

He received his Black Belt from man he called “Chief”, his original teacher, Sid Asuncion, a first generation Black Belt from Sijo. Some of Sids other notable Black Belts are Al Dela Cruz of KSDI, Al Dacascos, founder of Won Hop Kwuen Do, and L.A.P.D Martial Arts Consultant Richard Bastilio.

A personal milestone was reached at the 1999 International Kajukenbo Self Defense Institute Tournament and Seminar in Las Vegas, when he was honored with the title of “Grand Master” and awarded his Ninth Degree black belt, by the founder of Kajukenbo, Sijo Adriano Emperado.

Always a student, Professor George W. Iversen is widely recognized for his innovative, cutting edge, methods of passing on the lessons he has learned through people like Bing Fai Lau. He holds the distinction of being Bings last student before he passed away at the age of 99. Sifu Lau taught him the Yang style Tai Chi. At the time of his passing Sifu Lau was the last living black belt of Henry S. Okazaki. He was truly a living legend, a man of the greatest humility.

Sifu credits Ralph Vicini of USA Goju for introducing him to his favorite weapon, the Sai.

He spent many hours with William K. S. “Thunderbolt” Chow, founder of the Kara Ho system learning the philosophies that make that style one of the most explosive kenpo arts in the world.

There are few people who have the knowledge and insight to break down the mechanics of free style sparring like Won Hop Kuen Do s Grand Master Al Dacascos, whom he spent many years training with under Sid Asuncion, and who has done numerous seminars for Hawaiian Kajukenbo Association over the last twenty years.

Shihan Tony Troche has done seminars at the school, teaching the elite katas of Shotokan, Sifu s favorite traditional karate style. Visit the dojo and you will see students performing Shotokan favorites such as Hangetsu, Empi, Unsu, and Ba Sai Dai. James Lantayao has shared his masterful knowledge of Escrima in seminars for HKA.

One of Sifu’s dearest friends, Ed Parker, shared his knowledge of kenpo, and life in general, on many occasions, for which we are eternally greatful. Like every one else, we miss him dearly.

Sifu has been invited to conduct seminars in Guatemala, Honduras, and Costa Rica. He recently shared his expertise in teaching “Little Dragons” (youngsters 4-6), and Pressure Point Control Tactics, at a KSDI Seminar in Las Vegas.

As a competitor, some of his accomplishments were, “1972 Hawaii AAU Champion”, first professional weapons champion of Hawaii at the “1974 Hawaii Pro AM”, and “1974 World Series of Martial Arts” professional lightweight kickboxing champion.

Sifu has assured that the important tools we can use to maximize our potential in every thing we do in life, Respect, Discipline, Focus, Concentration, Control, Perseverance, Integrity, and Honor are not only used in our teaching, but he strives to make sure that every student knows exactly what the definition of each one is, and how they are invaluable in optimizing lifes potentials.