How could the holy secrets of handgunning be known by a woman?

Most of my friends have wives or girlfriends who don’t support their gun collecting, so they are forced to buy their firearms on the sly without upsetting momma. Some have even tried to coax their partner into the gun world by going out and purchasing a firearm for their loved one, thinking that this act alone would suddenly make their wife or girlfriend have a moment of clarity, realizing what she had been missing. Of course, my friends end up angry when their partner gives them a “you’re clueless look” and tells the guy “admit it, you bought the gun for yourself”. I guess I’m lucky because I don’t have to worry about these things especially since my wife loves guns!

Sometimes I have to pinch myself to make sure I am not dreaming. I mean how can my life be this good? I am married to a women who is beautiful, endowed with a figure most women would kill to have and to top it off she likes guns. Too good to be true you say, oh, but it is true, my friend. Not only does my lovely wife like guns, she’s an NRA Instructor, as well! 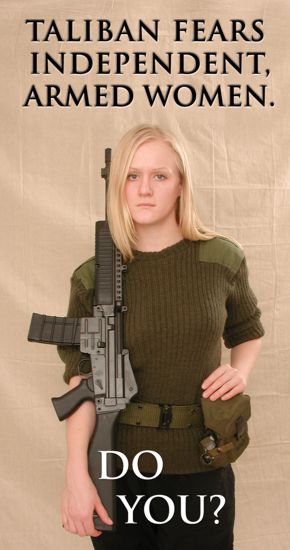 Admittedly, when my wife stated that she was going to become a firearms instructor, I looked upon the idea with a kind of smugness having the attitude “Oh, isn’t that cute….”, but then the strangest thing began to happen. My wife started developing ideas about guns that had nothing to do with my opinions or beliefs. All of a sudden the self-assured knowledge and opinions I had were no longer the final say in firearms within our household. My ideas and philosophies about firearms, techniques and procedures were being called on the carpet. My position as the ultimate firearms expert and guru within our household was being challenged. I found myself wishing for the good old days when I could dismiss my wife’s opinions on firearms as just talk from someone who didn’t know what they were talking about. Now I had to treat her as an equal when we talk about guns. Good lord, I started to wish she hated guns and become more like my friends’ wives.

The final straw was when she gave me her opinion on a pistol I was about to purchase, warning me not to buy it, stating her reasons why that particular pistol would not be a good fit for me. Well, of course, I had to buy the pistol just to prove to her that being a Man and an Instructor myself, I obviously knew more then she did but darn it, she was right.

What happened? How could the holy secrets of handgunning be known by a woman? What was it that made me so insecure and resentful? My wife’s new found love and knowledge of firearms threatened my ego so much so that I was blindsided and purchased a firearm simply out of spite. I started to fear that life, as I understood it, had taken some strange, dramatic shift. Would I soon lose the stranglehold on the TV remote as well? Gone were the old days of taking the wife to the range and being asked to load her magazines and then watch her as she unconfidently fired at the target, or hearing comments from her like, ‘wow it’s such a shinny and pretty gun’. Now I had a knowledgeable and opinionated Firearms Instructor as a wife who was proficient and tactically deadly with her skills.

Well, obviously, I ate crow on the pistol I bought and had to swallow my pride and admit to my wife and myself that she was right. A few weeks later as I watched my wife teach a pistol class to women it hit me like a ton of bricks. My wife not only loved guns, but she was now sharing this knowledge with other people, people who sought her out and asked her opinion. That day I was seeing my wife in a new light and had new found respect for her. I was ashamed of how I had previously felt.

Like most men, I had developed a biased belief that firearms, especially handguns were simply the domain of men and few women could possibly understand or be proficient in this field. Sure, I knew there were other female firearms instructors, but I considered them an oddity. I admit it; I had biased sexist beliefs regarding women and firearms as many still do today.

If you find yourself in a situation where you have a wife or a loved one that is developing their own ideas about firearms, here are a few suggestions, tips and comments to help your ego survive while encouraging your loved one at the same time.

1. It is O.K. for your wife to have a different opinion, likes or dislikes about a gun or firearm than you. She does not have to like what you like and vice versa. For you to tell your wife what she should buy or carry will only lead to trouble and make you look like a controlling sexist pig. Let your wife make her own choices about what firearm she wants because she should be buying the gun because she wants to, not because you told her what type of gun to buy.

Take for example the popular notion among firearms instructors and enthusiasts who tell their female students and friends that the only pistol for them is a small revolver. Many people inherently accepted this belief passed on from our grandfathers that semi-auto’s are too complicated for women to operate whereas on a revolver all they have to do is pull the trigger with no worries of jams or malfunctions. The key here is to allow her to make the most educated choice. It is true that she may base some of her decisions on how shiny the gun is or how pretty the handle looks but the bottom line is that the choice is hers (and she will have to learn from her mistakes, just like we do)

2. It is okay for your wife to enjoy firearms as much as you. Sure, believe me, I know it’s weird and even threatening, but if you allow yourself to be free of ego and treat your wife as you would one of your male buddies when discussing firearms, you will find it can even deepen your relationship and understanding of one another (look out Dr. Phil, Here’s Michael’s Latest “Happy Marriage through gun ownership seminar”…)

3. It is okay when your wife is a better shot than you and everybody knows it. Well, I haven’t quite come to terms with this one myself, but I know in my heart it does not make me less of a man (does it?).

Through watching my wife’s journey from beginner to proficient firearms enthusiast, to an NRA Instructor I have been privileged to watch my wife develop and grow as a person and instructor. I enjoy watching her teach and explain an idea or technique I have taught a thousand times and then turn it around and explain it to one of her students in a manner and style that I would have never thought about. Men, it is time we admit it. Women are in the gun community for good and we better start treating them as our equals and dispel our sexist ideas and biases, because if we don’t, it will only come back to bite us in our own rear ends. If you change your point of view and open up your ears, you might find you can actually learn something from their perspective and knowledge. So, originally I felt my wife hijacked my gun identify from me and under-minded my gun skills, knowledge and experience. Then I reached peace with it and realized that I didn’t have it so bad, hey she’s hot and well armed, what more could a red blooded American male ask for?

Used with Permission of Author. Copyright retained by Michael VanBlaricum 2004.

Everyday Weapons and a Survival Mindset Are A Girl’s Best Friend!