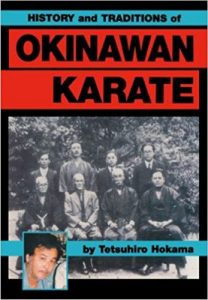 In History and Traditions of Okinawan Karate Master Tetsuhiro Hokama will teach you rare Okinawan katas. He will show you through his Okinawan martial arts museum and show you rare photos of the old school masters like Funakoshi, Chibana, Miyagi and many others. Master Tetsuhiro Hokama is considered one of the few who have kept the history and traditions of Okinawan karate and kobudo alive.

Tetsuhiro Hokama is 10th Dan Hanshi, President of the Okinawa Goju-Ryu Kenshi-Kai Karate-do, Kobudo Association and founder of the first Karate museum in the world. Although he is not as well known in the United States as are other Okinawan Goju-Ryu teachers, Hanshi Hokama is one of the most knowledgeable Goju-Ryu Karate masters. He has a deep understanding of the “Old Ways” of Karate.