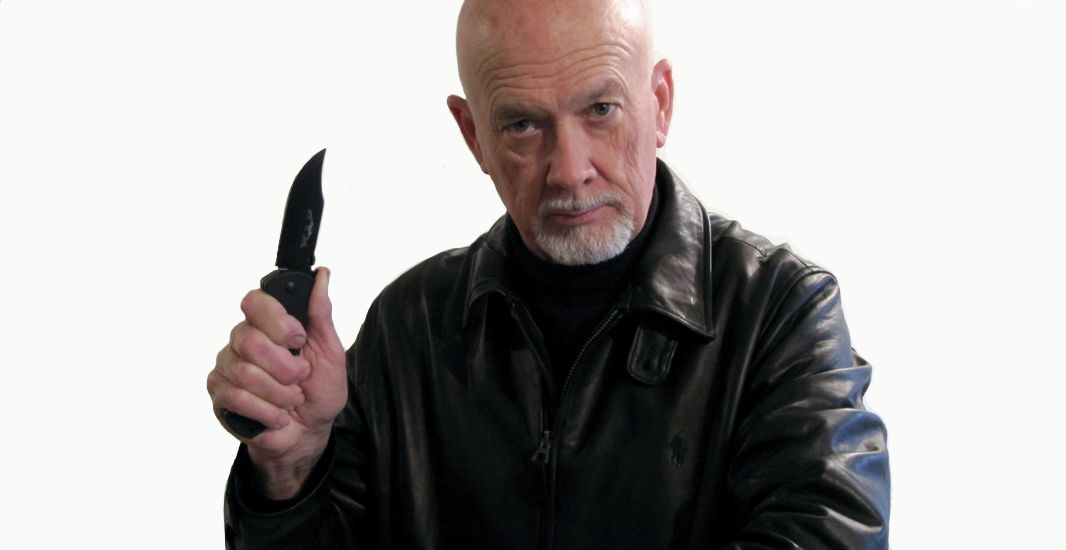 The knife has been a vital part of a warrior’s personal arsenal for thousands of years.

It is nearly as old as mankind. Even with the high-tech weapons used today in combat, the knife is still found in the hands of today’s modern military combatant. In close quarters combat, the blade is as important now as it was during the time of the ancient samurai. Recently the army announced that it was replacing the traditional bayonet training (using the blade on the end of the rifle) and are now using the bayonet only as a knife for CQC application.

On the battlefield, the military knife has one purpose, to terminate the enemy. For the military combatant to be effective in using the knife, he/she must have two major components:
(1) the killer instinct, and (2) a realistic system of using the knife

When Bruce Lee developed Jeet Kune Do (JKD), his art of “scientific street fighting” (based on Wing Chun, boxing, and fencing), he unknowingly also formulated the core for a very efficient and deadly system of knife fighting. JKD was “born” at James Lee’s garage in Oakland, California during the mid 60’s when Bruce and his family lived with James Lee and his children at James’ Oakland home. Professor Wally Jay told me that during the evenings when James would get home from work, James and Bruce would work out for hours in the garage doing research and development in the formulation of what is now known as the original JKD. When Bruce moved to LA for the new TV series “Green Hornet”, James took over the teaching responsibilities at the Oakland school. Bruce was still the chief instructor over the curriculum.

After returning from a tour of duty in Vietnam, in early 1971, I too, trained at the birthplace of JKD. I was accepted as one of the few students of the exclusive Oakland JKD classes. One evening after class, I asked Sifu James if we were ever going to train in weapons. He answered, “Where have you being all this time during classes? We have been training in weapons.” He then smiled and explained, “When you learn JKD, you already know how to use weapons. You simply do the same empty hand JKD techniques with a weapon in your hand. The weapon simply becomes an extension of your JKD. “ As I left JKD class that informative night, I then understood the principle of JKD knife fighting, which was not related to Kali or Escrima, but was a method of its own. This laid the groundwork for my personal JKD combat knife system, that I developed and have been teaching for years to military and Homeland Security related personnel.

As part of my JKD knife combat training, I emphasize developing the “KILLER INSTINCT.” James Lee would lecture our small JKD class, stating, “If you want to be a real JKD fighter, you must have the “Killer Instinct.” Been in the active duty military during this time and having just returned from Vietnam, I understood what he meant, but the civilian students may have had difficulty in grasping this mindset. The combatant must be willing and able to terminate the enemy without hesitation, without remorse. It is simply a matter of survival with attitude. You have to work it out in your own mind, your own moral compass, as to what your are willing to do to someone else in order to survive. Waiting until the fight starts to wrestle with this personal issue, is too late. You will be distracted and will hesitate, then you will be dead. Hesitation kills. You must have it already resolved within yourself, so when that moment arises, when you are facing your enemy, you will not hesitate to attack and destroy him. When you attack with your knife, it should be done immediately and without compassion. You reflect the resolve of the Samurai, and terminate your opponent without a second thought. The only thing on your mind should be the destruction of your enemy. Do not think about what he can do to you, but what you are going to do to him. All of this is part of developing the ‘KILLER INSTINCT.”

My personal JKD combat knife system demonstrates an arsenal of effective and devastating blade techniques based upon the original Oakland JKD, along with some special techniques acquired from my own military experience. Let’s make it clear, on the battlefield, you are not dueling with a knife. You use the knife to simply kill your enemy during combat. There is no “fairness” in battle, you either win or lose, and the loser dies. You fight to survive with whatever weapons are available. You have heard the phase, “Don’t bring a knife to a gun fight.” Well, you should. I would rather shoot the enemy first and foremost, but “stuff happens.” Firearms do eventually run out of ammunition; sometimes they jam up. This is when you want a knife for your backup weapon. You may be involved on a mission where you must use stealth and silence, and the knife or empty-hand tactics should only come into play. While in the military and in law enforcement, I always carried a backup knife. Here is the hierarchy of combat weapons:
Firearm – knife – empty hand.

If you are properly trained with a knife, you can dispatch many opponents quickly. But the key words here are, “properly trained.” You may think that you are the “baddest” guy out there, but if you don’t have the combat skills, you will be taken down. You have to know how to grip the knife, how to position your hands and stand, how to recognize the best and accessible target, and most importantly… how to execute knife techniques during your attack. This is where Jeet Kune Do comes into the picture. JKD is one of the most effective combat martial arts available. JKD is simple, direct, deceptive, and devastating. There is no sport, no aesthetics in JKD. It is totally reality-based combat. When you take the original JKD and put a knife in your hand, you now have a most deadly and efficient knife fighting system.

These principles, when applied using JKD techniques with the “killer instinct,” can be very devastating to an enemy. They become a part of the arsenal needed for survival during combat. GOD BLESS AMERICA AND OUR MILITARY MEN AND WOMEN. Oooorah, and Semper Fi.

Professor Gary Dill has been in JKD for over 40 years and is one of the few original students, spending many years in the military and in law enforcement.

Best Practices: Why the OODA Loop is Still Relevant

Amaury Murgado - January 3, 2013
We use cookies to ensure that we give you the best experience on our website. If you continue to use this site we will assume that you are happy with it.OkRead more