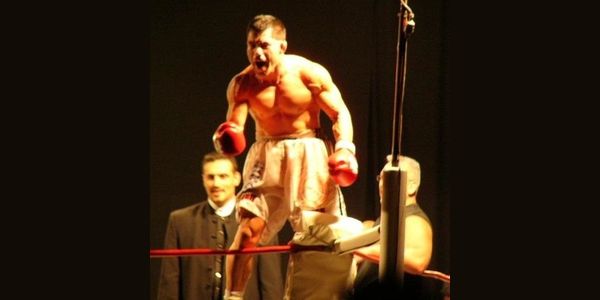 Shiai Magazine: You are Grandmaster Vincent Palumbo of Australia.

Grand Master Vincent PALUMBO: Hello, I’m very pleased to meet you, and thank you for this wonderful opportunity to introduce myself to the country of beautiful Africa!

Shiai Magazine: Tell us how you got into practice of martial arts?

Grand Master Vincent PALUMBO: I was a child of about 8 years of age, and I remember when my mum and dad took me and my sister to the movies to watch a martial arts movie called ’the big boss’ with the great Bruce Lee in it, and after i saw this incredible man doing his martial arts on the big screen, i knew that this was what i wanted to do, and i’ve been doing it ever since that time!

So the first combat art that I practiced as a child was boxing, this taught me how to punch properly, and also how to overcome fear of pain from being hit, and it taught me how to believe in myself!

Shiai Magazine: Which are the martial arts styles you specialize in? Have you heard about existence of African martial arts?

I have never heard about the african martial arts, but i am interested to learn about your countrie’s style of fighting art!

Your people are warriors, so its no doubt that they have developed their own form of fighting art that has been passed down from the great old tribe men to the young upcoming warriors in all of these different tribes that you have in your country!

Shiai Magazine: living in Australia have you been in contact or seen the arts of fighting of the aborigines of Australia?

Grand Master Vincent PALUMBO: I used to live in the northern territory of australia in a place called alice springs, and many aboriginal people live there, so they told me that the aboriginal people have developed their own form of fighting art, but unfortunately it is kept a secret, and i’ve never seen the style or how it works!

The aboriginal people are also great warriors of the land too!

Shiai Magazine: mention some of your martial arts achievements in competitions and titles?

Grand Master Vincent PALUMBO: I have competed for over 20 years in the combat arts, and these are some of the titles i have won in many of the different tournaments are-

I have had over 200 full-contact fights in the ring, and I am very keen to keep up the competition fighting until I reach 50 years of age, because this would make a great career of achievements for me some day!

Shiai Magazine: Explain us about your martial arts schools in Australia? Will you be willing to come to Africa and African American community to promote your school?

Grand Master Vincent PALUMBO: I would love to get an invitation to come and teach seminars in your country!

I operate my own ’international combative martial arts academy’ in the city of Adelaide which is in south australia, and i have some affiliate schools around Australia in cities such as Sydney, Alice Springs, Brisbane, Darwin, Hobart and Perth in Australia.

And i also have affilliate schools in Philippines, Indonesia, Germany, Malaysia, Poland, United Kingdom, United States of America, and also in new Zealand! (now I want to see this art flourish in africa, okay!)

Shiai Magazine: Which are top black fighters have you met in your career?

Shiai Magazine: You have also acted in martial arts movies?

Tell us more about your martial arts acting experience?

Grand Master Vincent PALUMBO:I have worked on a martial arts movie in Thailand, and this movie was directed by the great Menahem Golan, he made the movie ’Bloodsport’ with Jean Claude Van Damme as the big hero in it, and it was this movie that shot them both to stardom as well.

In the movie ’Final Combat’ I had to choreograph an exciting stickfight scene between the lead actor Tonny White and myself, so I spent a month in Thailand teaching Tonny white how to stickfight, then we created the fight scene together for that movie.

It was Menahem Golan that telephoned me at my own martial arts gym in Adelaide, and he asked me to be in his movie because i was a champion in full contact stickfighting, and because i was a westerner and a master in the Filipino stickfighting art of the ’Cacoy Doce Pares eskrima’ of Cebu City, Philippines.

Then in 2005 i was asked by Hollywood movie director Art Comacho to do a small action scene in his new martial arts movie that is now called ’confessions of a pit fighter’.

I had to play the part of a prison guard that beats up a prisoner of the jail which was played by the lead actor of this movie, he is the world famous martial artist called hector echavarria, and i had punish him with my stickfighting skill while using a wooden baton!

Wow, this sounds like an exciting project, i wonder if they need a world champion stickfighter in their movie? (it sounds like a great movie!)

Grand Master Vincent Palumbo: Yeah, Ii will put my hand up for both of these movies, because Ii want to help them to make exciting martial arts movies in Africa, and i do think that everyone loves to see a real good stickfighting scene in these types of movies now, and martial art fans all love to see a good stickfight now!

Shiai Magazine: The aim of these movies is the promotion of African martial arts; will you be willing to work with them in future?

Grand Master Vincent PALUMBO:It would be a truly great honour to work with these really great martial artists in your country, especially on the set of these real great movies with them, this would be a dream come true for me, ok!

Its time to show the world exactly what you people have developed as your own cultural fighting art in africa, and by putting it in a movie is a really smart way to do it now, well done to you all!

Shiai Magazine: What are your future plans or projects in the world of martial arts?

Grand Master Vincent PALUMBO: My friend, i would really like to spread this Filipino stickfighting art of ’Cacoy Doce Pares Eskrima’ all over the globe, and teach the people about my 88 year old teacher Cacoy Canete who is the greatest stickfighter of all time, he is one of the world’s highest ranked martial artists still alive today, also he holds the rank of 12th degree black belt and supreme grand master, and he still trains every day, even at his advanced age!

Shiai Magazine: Supreme Grand Master Ciriaco ‘Cacoy’ Canete has been your mentor and teacher in the martial arts, tell us the relationship you have with him?

Grand Master Vincent PALUMBO: Supreme grand master Ciriaco ’Cacoy’ Canete has been my Filipino martial arts teacher for many years now, and he has taught me so march about the martial arts, and i treat him like my grand father, because we do have a truly wonderful teacher/student relationship.

He would also love to see his martial art style to flourish in Africa!

Shiai Magazine: Are you aware of difficulties in Africa?

Grand Master Vincent Palumbo: I see the suffering of the beautiful and precious children of africa, and it breaks my heart, so it’s time for the different nations to step in and to help with grants from their governments, so as to help these people!

Shiai Magazine: What advice can you give to African children who really want to succeed in life?

Grand Master Vincent PALUMBO: I am aware of the difficulties for the people in your country, and all over the world, and it truly makes me so sad because our world has become so volatile because of greed and politics, so my advice to the young children of africa is to always try to help their own families, and to talk with the older members of their tribe, because they are the ones that will give them the rite knowledge of how to survive in this world, and they will teach them the rite way of how to be a true and noble warrior of the land, and to always be a proud young person because of their great lineage and heritage!

We must help these young people, because they are our future!

Grand Master Vincent PALUMBO: Thank you so much for this opportunity and I am so very honoured that you feel i am worthy enough to be interviewed by your truly wonderful martial arts magazine there in Africa, this is great, okay!

My heart goes out to all the people of Africa, and i hope that you can all work together and make your country one of unity again!

If people work together, without political biased, racial biased, religious biased, and without greed, the result will be marvelous for every individual in your country, but it will take time.