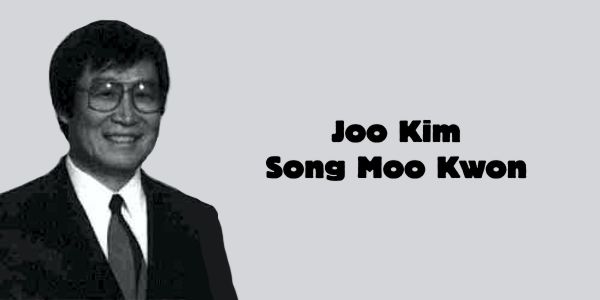 Joo Kim grew up in a rural setting near Wonju City Korea. He began practicing a variety of martial arts at an early age. Finally Kim decided that he wanted to devote his time to the teachings of Grandmaster Byung Jick Ro’s

School. Song Moo Kwon was one of the original five Kwons and Grandmaster Ro was himself one of the early presidents of the Korean Tae Soo Do Association. Later, the five Kwons were united under the collective name, Taekwondo.

As a young black belt Kim taught at the main school under Grandmaster Ro in Seoul and later operated his own school while attending college at Sung Kyun Kwan University. When he enlisted in the Korean army Kim was a 2nd degree black belt.

In 1964, now a 5th degree black belt Kim left Korea for the United States to further his education. While living in Louisville, Ohio Kim began teaching Taekwondo classes at the local YMCA. Two years later Kim would open his own dojang, this would be the beginning of an incredible martial arts success story.

More than 4 decades later Master Kim is known as the Father of Taekwondo in the Midwest. With numerous schools throughout Northeast Ohio and hundreds of students, Master Kim pioneered the ancient Korean art in America.

In addition to his many schools, Master Kim hosts one of the oldest annual tournaments in the United States. Grandmaster Kim was also one of 33 prominent Taekwondo masters who founded the organization that now defines Olympic style sport Taekwondo.

Currently Grandmaster Kim is the President of the All-American Song Moo Kwon Association and is on the Board of Advisors of the Asian Taekwondo Union.