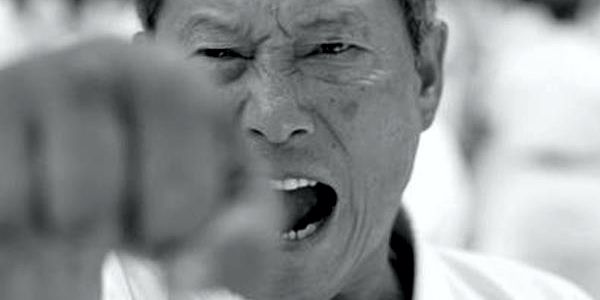 Kiai is the consequence of a special kind of breathing. It is usually said that it is a guttural sound, but the right KIAI comes from the abdomen as the result of strong expiration. The real KIAI is the consequence of the unconscious part of the human being and it is not deliberately provoked.

KIAI is largely connected to the proper breathing because the right KIAI means the proper expiration, and only the proper expiration enables the proper inhalation. Moreover, the contraction of abdominal muscles while exhaling strengthens the trunk ie the pelvis as the axis around which extremities rotate. The technique of strong guttural expiration was also applied by Zen masters for explaining some ideas to their disciples and they called it KATSU.

Dan Tien is chinese name for the central point on the human body, which is located just below the navel and they equate that affects breathing. Japanese name for the same point is HARA. Greeks name for this point is pneuma (airflow, breath or life forces).

By observing human movement or stillness in a short time interval it is possible to see two basic possibilities for the man’s relationship to the surroundings in which he finds or doesn’t find support.

The complete expiration lowers the unconscious brunt of the body in the surroundings where we find ourselves, while we strengthen the central part of the body around which circulate peripheral attachments under the impact of the force of muscle contraction. All the life phenomena are connected to the process of oxidation or reduction, ie without oxygen there is no life.

The supply of our cells depends on blood and oxygen transport by blood. While contracting, the muscle gets up to ten times more blood than when it rests, thus taking more oxygenand glikogen.

The input of oxygen is just one function of exhaling function which also covers the rejection of CO2. The cells become free of waste products so that they release them into blood, and this cleansing particularly takes place in the lungs. To sum it up, the complete expiration ie KIAI is the condition without which there is no right and complete inhalation.

The volume of air that lungs can take is called “the vital capacity“. The aim of numerous breathing techniques is to enlarge that capacity. Nevertheless, before enlarging it to the maximum we should use the amount we already have as the result of strong expiration (KIAI).

The movements of the diaphragm and the chest speed the venous circulation in the whole organism. The muscles of the diaphragm are ones of the strongest in the human body. The expiration KIAI which consists of AU, AI, OI or EI makes the whole skeleton of the thorax vibrate, which proves that vibrations are transfered to the air mass closed in the lungs so that the gentle membrane of alveoli in the contact with the air vibrates stimulating pulmonal cells gases replacement.

The more recent works of western physiologists report that this vibration has a very noticable effect on endocrine glands, which science pay more attention to.

It has been proven that the emission of vowels during the exhaling (KIAI) causes a vibratory selfmassage of organs. These vibrations reach to the deepest tissues and nerve cells enlarging the blood circulation in organs.

Endocrine glands that send hormones directly into blood and lymph are getting stimulated ( the pituary, the thymus, the adrenal gland etc…) as well as sympaticus and the brain nerve subject to this useful influence of vocal vibrations.

The vibromassage is particularly important for the organs situated in the thorax and the abdomen. Such vibrations create electromagnetic waves which spread throughout the organism thus enlarging the dynamics of living. Under the impact of this internal vibration the man gets rid of depression, the inferiority complex, and achieves the mental balance.

As the air is coming from the lungs (KIAI) and making the vocal cords vibrate, it completely occupies the consciousnes, which results in direct economy of nerve impulses or available energy for other things, and it is the best way to get rid of irritability and get back stability and peace.

After all, doesn’t music provoke various emotions by means of vibrations? Just enough to understand KIAI- the strong shout.

KIAI has got a unique and noted role in martial arts. KIAI is used in the fight while performing strikes, is used in KATA, as well as in breaking techniques TAMESHIWARI.

KIAI is also applied in self defense – when we want to intimidate the opponent or encourage ourselves and, therefore, prepare for the fight (spirit yell). Thus the strike and the defense will be more efficient. KIAI can be rather loud (scream) or on the contrary quite silent (breathing out), it can be longer or shorter depending on a certain person and situation.

In some martial arts the application of KIAI breathing technique is highlighted in the names of these disciplines, eg. in China the style TAI CHI (CHI, Japan-KI), in Japan – AIKIDO (AI-KI-DO), IAI DO (KENDO), in Korea – HAPKIDO (HAP KIDO) etc…

Therefore, KIAI breathing technique is used in karate, judo, kung-fu, kendo, jujutsu, tae kwon do, also in wrestling (when throwing the opponent), boxing and kick-boxing (when performing strikes), fencing as well as in lots of other martial arts.

It is interesting that the strong scream (KIAI) can be heard from various sportspersons not only in martial arts but in other sports, too.

Some examples are: athletes (shot putters, javelin throwers etc.), weightlifters, as well as skiers ( when leaving the start).

The loud scream (KIAI) can also be noticed in tennis when players run a stronger shot, but it is not the only case (Rugby – The Haka, etc…).

All of the above goes for the thesis that the real KIAI is not the consequence of willing to act.

On the other hand, it is true that it can be trained and perfected.

The Pinan / Heian Kata Series as a Fighting System: Part...