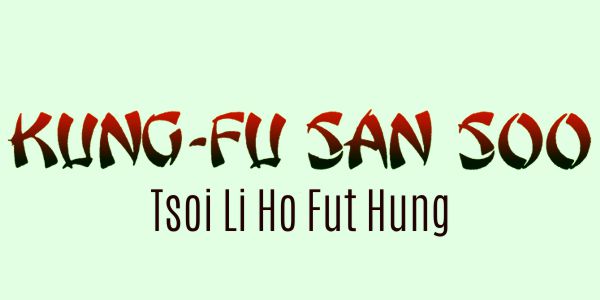 What is Kung Fu San Soo? Kung Fu San Soo is considered, by many, to be the most sophisticated and complete form of martial arts in existence today. Inside Kung Fu Magazine refers to San Soo as “Legendary” and “Devastating”. Both of these statements could be considered opinion and many consider them fact, but all agree that Kung Fu San Soo is not a sport. By it’s very definition; the complete use of a man in hand to hand combat, the art cannot conform to the specifications of being a sport. In order for it to be a sport, it must be governed by a set of rules. However, if a set of rules were applied to San Soo, a fighter’s techniques would be limited and they would no longer be executing Kung Fu San Soo.

San Soo is a martial art, which incorporates principles of leverage and movement, as well as proper breathing and concentration to create a powerful and effective fighter. Many of the leverage moves can find their basis in the principles of physics. Although Lo Si Fu never studied physics, he did understand the mechanics of how a body moves, acts and reacts in a given situation. He understood principles of motion that many go to school for years to learn, but his education came through experience.

There are two keys to the success of a San Soo fighter. First, there is the versatility of the movements. The combinations of blocks, punches, kicks, throws and leverage moves can be altered instantly to respond to any situation a fighter may encounter. Offense is the second key. A San Soo fighter does not fight defensively. Once it has been determined that a confrontation cannot be avoided, the San Soo fighter reacts offensively, taking their opponent by surprise to end the fight quickly. In Lo Si Fu’s own words, “You can’t win a fight by defensive, offense to win.”

In addition to the fighting techniques learned in San Soo, the student learns agility, balance, coordination, humility and respect for human life. While learning the techniques and movements of San Soo are very important, Lo Si Fu always emphasized the importance of humility. According to him, “The art of Kung Fu San Soo lies not in victory or defeat, but in teaching and building human character.”

The historical roots of Tsoi Li Ho Fut Hung1, known in America as Kung Fu San Soo, go back about 1500 years to the Temples in China. However, due to the constant upheaval in China’s history, many records have been lost or destroyed, leaving some questions unanswered. As dynasties were overthrown and Emperors changed, China was divided and sub-divided into various warring factions, and each faction produced many different types of fighting styles. The art of Tsoi Li Ho Fut Hung is a combination of some of these fighting styles that emerged throughout the tumultuous history. The Martial artists, throughout China’s history, have been forced to fight for the Emperors or against them using their fighting skills. It is only due to their unique fighting skills that the monks and the martial arts are still in existence today.

Although the martial arts came out of the monasteries, the monks are not the originators of the arts. The Buddhists religion is one of peace and not violence, so the monks would not have spent their time devising means of combat. However, according to Han and Tang Law, soldiers were not allowed to leave their positions unless they died or entered monasteries. Many of these soldiers left their positions to become monks, but took their martial arts exercises with them. While they had become monks to leave their positions behind, they continued to train in the arts and eventually trained many of the other monks.

One of the monasteries that trained in the martial arts was the Kwan-Yin monastery in the village of Pon Hong, Guangdong Province in Southern China. The main reason these monks began to train in the martial arts was to protect themselves from bandits and outlaws. They traveled from village to village collecting supplies and donations for the monastery. Many times they were set upon by outlaws and killed for their supplies.

One young monk that trained at the Kwan Yin monastery was Leoung Kick. He was an orphan when the monks took him in at the age of 10. Leoung Kick was at the monastery until the age of 30, when he decided to leave. Upon leaving, he took with him the training and experience he had gained as a fighter in Tsoi Li Ho Fut Hung, the fighting style that was developed by the monks at the Kwan Yin Monastery. He was the Great, Great, Great Grandfather of Chin Sui Dek, a.k.a. Jimmy H. Woo.

Three generations later, Chin Siu Hung, following in the footsteps of his family, became a well-known San Soo teacher. Hung was a big man both in status and in size. He was 6’5″, 320 lbs., and the overlord of his province. As a practitioner of San Soo, he became a participant of the Lei Ti matches. These were competitions between martial artist of northern and southern China. They were also great social events for martial arts experts. Hung was famous for issuing challenges to the entire crowd of practitioners. In these events, the participants fought until their opponent submitted and often ended in death. When Hung issued a general challenge, there were rarely volunteers and the meeting became strictly a social event. Hung’s style of fighting was known for it’s crippling ability and few would challenge him.

In 1918, Hung’s nephew, Chin Siu Dek, Jimmy H. Woo, came to live in his province. At the age of 4, the family taught Dek little fighting “tricks”. When he turned 5, his formal training began. From the beginning, Dek was his Great Uncle’s prize student. He learned extremely fast and loved the grueling workouts on the hard floors. In his teens, Dek became a travelling teacher of the art of Tsoi Li Ho Fut Hung. If someone in the province needed a grievance settled, Dek was the enforcer. When the village elders decided it was time for the young men to learn to defend themselves, Dek was sent to the village to stay for months and teach them.

The Japanese invaded Mainland China in 1932. However, they did not take over the southern provinces at this time. Chin Siu Hung was 73 when they took over his beloved province. In 1942, he was forced, against his will, to answer a challenge to fight the regimental karate champion of the Japanese army. The fight was to the death of one of the fighters. This was to be a public display of the power of the Japanese conquerors in front of the “poor villagers”. Under threat of the death of his people if he did not comply, Hung fought and defeated the Japanese champion in less than 20 seconds. He and most of his students were then killed by machine gun fire. This basically ended Tsoi Li Ho Fut Hung in Mainland China.

Fortunately, in 1935, at the age of 21, Chin Siu Dek had left Mainland China under the passport name Kun Haw Woo2, and sailed for the United States on a steamship. There is much speculation as to the reason Dek used an assumed name, but we know from his memorial tape that he was not an American citizen and had to buy a passport in order to enter the United States. Had he not left, he would have suffered the same fate as his Great Uncle and his fellow students. The Japanese invaders could not allow any possible resistance force to remain alive. Dek carried the art of Tsoi Li Ho Fut Hung to America and kept it alive while many of the other fighting systems were destroyed by the Japanese. Mao Tsi Tung later eradicated many of the other martial arts styles, training books and monasteries when the Communist Chinese took over power from the Japanese at the end of WWII.

Jimmy remained in Los Angeles’ Chinatown after landing in the Port of Los Angeles. He worked a variety of jobs as he became acclimated to his new home in Chinatown, but he still found time to teach the art of Tsoi Li Ho Fut Hung to close relatives and friends. Later, he became an instructor at the Sing Kang, “cousin club”, a social/recreational organization. He also served as security for the residents and businesses in the area and sometimes acted as a bodyguard.

In December 1962, Jimmy opened his martial arts studio at the Midway Shopping Center in El Monte, California. In the early years, he called it “Karate-Kung Fu” because no one knew what kung fu was at the time. He also opened up his studio to non-Asian students. He was the first Si Fu, Master, to teach American students. He went by the name Jimmy to these American students, and referred to the art of Tsoi Li Ho Fut Hung as Kung-Fu San Soo. He used the term San Soo to reinforce the combat style of his art. Kung Fu San Soo has an emphasis in fighting, not the spiritual or healing aspects found in other martial arts.

Lo Si Fu knew that in order to keep the art of San Soo true, you cannot mix other styles of fighting in with San Soo. To add or take away from the art is to alter the very essence of Kung Fu San Soo. To alter San Soo is to say it was not complete to begin with, and anyone who saw Lo Si Fu teach and demonstrate it, could not make this claim. In his memory, the art must be preserved in its’ original form.

2 Later changed to Jimmy H. Woo at the request of an American teacher.