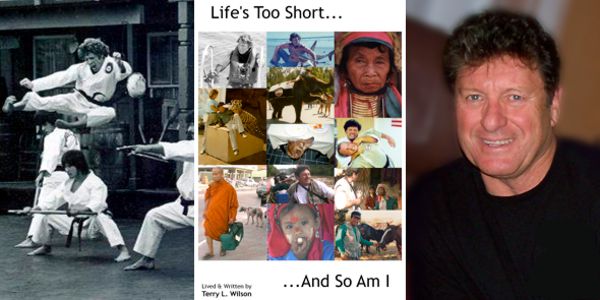 Terry Wilson is hilarious. He is a wonderfully gifted martial artist and martial arts instructor who will keep you laughing while you learn. Terry strictly adheres to murphy’s law: anything that can go wrong will go wrong, but, unlike most who have gone through what he has been through in his life, he turns things around to make you laugh, even at his expense. I so enjoy Terry Wilson and his book, and I know you will too. ~ Dana Stamos

Terry’s new book Life’s Too Short . . . and So Am I is finally out in Kindle version. Funnier than heck, this book takes you along on a very adventurous ride. Experience the real-life travels and tribulations of Terry Wilson as he validates Murphy’s Law around the world. Yes, whatever can go wrong, will go wrong, and Terry’s misadventures are always hilarious. Terry’s book may read like fiction, but its all true, and Terry’s got the pictures to prove it. Get the Kindle version of Life’s Too Short . . . and So Am I on Amazon.com today!

And that’s just the beginning!

The stories in Life’s Too Short . . . and So Am I are excerpts from my life. For years now, my friends have been saying: “You really ought to write a book.” They wouldn’t stop bugging me and so I wrote Life’s Too Short . . . and So Am I. It’s a collection of my misadventures to date. Whether you’re laughing with me or at me, enjoy a chuckle or three at my expense. Certainly, my friends have.

Miyamoto Musashi: A Life in Arms

Donald Miskel - September 15, 2011
We use cookies to ensure that we give you the best experience on our website. If you continue to use this site we will assume that you are happy with it.OkRead more