Who made certain of us the martial arts police is a mystery to me, but some of us seem to have assumed that position.

I probably do enough writing for ten people. It’s not so much that I’m insightful or prolific as that I’m opinionated. I’m a preacher and pastor by vocation. Pontificating is in my nature and preaching and teaching is in my blood.  In my past I’ve been a Psych professional and a counselor. I have the training and the degrees to back up my experience. My passion aside from preaching is the martial arts. I’ve dedicated fifty five years of my life to training in and teaching the arts.

My career in the arts began in judo and jiu jitsu. From there I went to karate, kung fu and kempo. I have a long background in the classical systems of the martial arts. Since that time I have combined the arts that I’ve studied along with life experience and personal insight into an eclectic system that is combative in nature. What with working in psych, the penal system and on the fringes of law enforcement; growing up in the toughest areas of one of the roughest major cities of our nation, fighting in its mean streets trying to survive and experiencing war and military combat (some of it hand to hand) I have a pretty good grasp of practical self defense and combat. I’m no tournament champion but I can fight and I had a reputation that proved I did it well.

Who made certain of us the martial art police is a mystery to me, but some of us seem to have assumed that position.

I try to keep my finger on the pulse of the martial arts community, its trends and direction. Sometimes seeing what I see in the arts and the martial art community baffles and often saddens me. The martial arts, especially in the U.S., have always been rift with politics but it’s worse today than it’s ever been. Some of us have taken it upon ourselves to criticize and ostracize some of the rest of us. Who made certain of us the martial art police is a mystery to me, but some of us seem to have assumed that position. We feel that we have somehow earned the right to determine who is worthy of acceptance and who isn’t; who is real and who is phony and so on. It is my belief that those who believe and have faith in us will follow, validate and support us. Actually, the effectiveness of our arts validates us. What else should a fighting art require?

One of the things that cause these divisions is the rift between the classical and eclectic styles. Then there is the division between the combative and sports aspects of the arts. Part of the reason for this is the almost religious reverence shown to the originators and creators of the arts that we train in. Many of us will fight to maintain the purity of our arts however time and the modern demands of combat show them to be impractical. Please understand me. I’m not criticizing these arts or the ones that follow them. There are many reasons for practicing the martial arts. If the traditional approach fulfills your needs then by all means follow them. There is a richness and beauty inherent in these arts that make them well worth studying. I just have a problem with anyone who teaches an art that was designed to answer the needs of a feudal age hundreds of years past and declare them to be the consummate self defense system for this modern day. If an art has to be tweaked too much just to make it practical I question its ability to fulfill the needs of modern day combat. All of the changes required to make them workable changes the art and at that point it is no longer the art originally created. 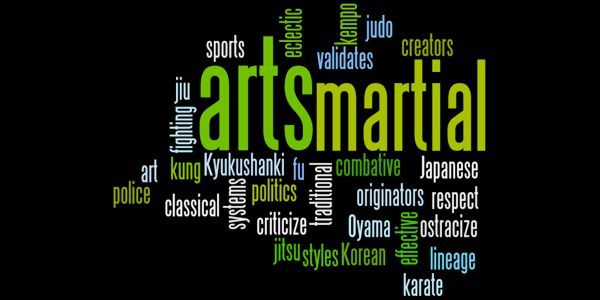 There is a lot of controversy concerning eclectic fighting arts. If one would be honest he would realize that most of the arts that we study today are eclectic in nature. Master Funakoshi, the creator of Shotokan karate studied both naha-te and shuri-te. He combined these to create what we now consider a classical system. Likewise with Master Oyama’s Kyukushanki karate and many others. Most of the Korean systems are a synthesis of Korean and Japanese systems. Likewise the Okinawan systems are comprised of Chinese influences as well as Okinawa’s own indigenous arts. There are few pure systems that have not been influenced by or distilled from other arts.

It’s good to be loyal to our particular styles and systems of martial arts and to show appreciation and admiration to those who made them what they are but we must keep in mind that these people were only men. Many Eastern countries have taken the recognition of lineage to a level that approaches ancestral worship. Japan, for instance, is a Shintoist country. That is to say that Shinto is their traditional religion. Their faith involves a deep veneration of ancestors. This is true to an extent in most Eastern countries. Those attitudes influence the way the martial arts have traditionally been taught. I believe in giving honor to whom honor is due but no-one on earth has yet to create anything that is perfect. All martial arts have their shortcomings and sometimes their flaws. In the end a martial art is as good as what it accomplishes. No martial art was created by a God and none of them will make us into supermen. In the long run it is the man that makes the art and not the art that makes the man. An art is no better than those who practice it.

I encourage every martial artist to continue studying. If you are satisfied with your art continue in it. However don’t tear down someone else because he follows a different approach. We each must find our own way. The way may be blazed and the path laid out before us but it is up to each of us to walk it or decide on a different path. No one way has every answer.

If you don’t care for or believe in a particular art, its creator or its practitioners just leave it alone. It will either succeed and grow or it will die a natural death.

It isn’t anyone’s job to be the martial arts police to validate another just as it isn’t his job to defame another. We are at liberty to seek our own path and shouldn’t have to suffer the abuse of others because our path doesn’t coincide with theirs. It’s time to grow up. All of the infighting and backbiting only denigrates the arts. It makes us look like a bunch of grammar school bullies trying to secure our reputations at the expense of others. There are no aristocrats in the arts, no martial art police. We are all fellow martial artists whatever we choose to study or to teach. If a system isn’t efficient it will die on its own. It doesn’t have to die under the gnashing teeth of a pack of rabid martial artists. If you don’t care for or believe in a particular art, its creator or its practitioners just leave it alone. It will either succeed and grow or it will die a natural death.

Mental Kung Fu: Use Your Mind