Years ago, there was a grade school just up the street from our first house. It was located on a rather busy intersection, especially during student drop off and pick up. As a matter of fact, it was busy enough that the school hired a crossing guard. His name was Chuck. Chuck was a retired postal worker with a real friendly temperament. I would occasionally see him at the coffee shop where he was always jovial. But let me tell you, once he put on his crossing guard vest and picked up his stop signi, he was all business. It became extremely clear to everyone driving by that the safety of those kids was paramount to him. No one would even think about speeding through the intersection or entering into it when a child was crossing, because Chuck would be all over them. He made sure that no child got hurt on his watch…He owned that corner. Then, when his shift was complete, he would take his vest off, put his sign down and turn back into a big teddy bear.

Chuck took his job seriously and I learned an important lesson from him. I believe his example should apply to all of us when we’re doing a job. We should put ourselves wholeheartedly into the task at hand, be completely present focused and mindful of our responsibilities. In other words, we should “own our corner”. Anyone else up to the challenge?

Thanks Chuck for the great example. 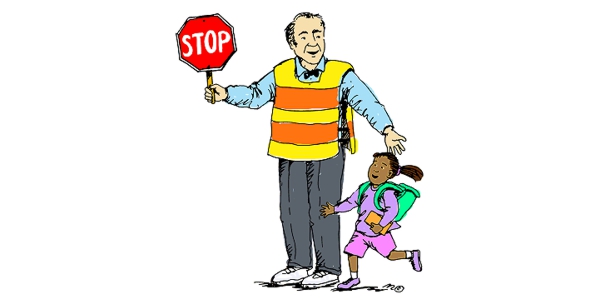 Taking Care of Yourself

What is your desired outcome?