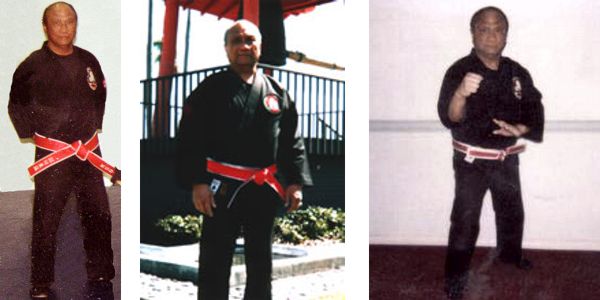 Senior Grandmaster Lucky Luciano was born in the state of Hawaii. He started his career in the martial arts at the age of 4 under the tutorship of his grandfather, the late Sifu Lai, a Master in the art of Tai Chi, in Beijing, China. At the age of 9, Lucky Luciano began training in the art of Judo under Sensei M. Arruda, who was also a Sumo champion wrestler in Hilo, Hawaii. At the age of 12, Lucky Luciano was introduced to the original Kajukempo system. Lucky Luciano’s personal adviser was the late Grandmaster Aleu Reyes of Vacaville, California and the late Master Sid Asuncion of Honolulu, Hawaii. In August 1976, at the Annual International Karate Championships held in Long Beach, California, Grandmaster Luciano was promoted to the Rank of 7th Degree Red/White Belt by Sijo A.D. Emperado and the title of “Sigung”. Lucky Luciano would reach the rank of 9th degree Black Belt, Grand Master under Sijo Emperado.

Senior Grandmaster Lucky Luciano was a recognized member of the California Black Belt Federation #014; Emperado’s Black Belt Society, Hawaii Black Belt Society, and a member of Emperado’s World Kajukenbo Organization. The World Federation of Karate-Do Class “A” Member, The Martial Arts Collective Society as Board Member. He is also a certified national official in the R.A.J.A. System as a Referee-Arbitrator at the Class “A” International level under Shi-Han Edwin Hamile who is the president and founder of the West Coast Shoto-Kan Association of Temple City, California. He was selected as the area coordinator for Zone VIII, Southern Pacific-Hawaii Association during the 1984 Olympics held in Los Angeles, California. He was also the recipient of the Helms Foundation Award from the Boys’ Club of America. In 1969, he was voted the Most Outstanding Martial Arts Man of the Year, and the Most Outstanding Instructor. His colleagues and peers have recognized him as one of the most respected and traditional practitioners in the world of martial arts today.

Senior Grandmaster Lucky Luciano co-directed the reunification of Sijo Emperado’s Black Belt Society Seminar held in San Diego in 1986. During this seminar, Grandmaster Luciano was accepted and ordained by the Board of Directors (Advisor Ming Lum, Master Clarence Lee, Professor Joseph Halbuna, and the founder and president, Sijo Emperado) to the rank of Associate Professor, 8th Degree, Red Satin with Black Border Belt, in 1990, with the blessing of the founder, Sijo Emperado, he was ordained to the rank of 9th Degree Red Satin with Silver Border Belt and the title of “Professor”. On June 15th, 1999, during the annual gathering in Las Vegas, NV, Lucky Luciano was promoted by the Creators and Co-founders of the system to the title of “Grandmaster”.

Senior Grandmaster Luciano believed that loyalty and discipline coupled with dignity, respect and honor are the ingredients that make up the martial arts, and he encouraged his peers and practitioners of their respective systems to acknowledge, “To teach is to learn”. He believed that everyone is a student. He also wished that we all bear in mind that “one hand washes the other,” and we should be careful to preserve and protect the laws of God and people and take care not to put one’s self above the laws of both God and people. He always accredited his abilities and knowledge to his grandfather, Sijo Emperado and his Advisory Staff. He always acknowledged his associates, students and all those who supported him and the world of martial arts throughout the years.

I just got word that SGM Lucky Luciano, another Kajukenbo Warrior, is in Heaven. He passed this morning at 5:00 am in San Diego, a great friend and mentor. I will miss his happy go lucky personality when around close friends. Now he joins the big luau in heaven with GM Tino Tuiolosega, GM Ming Lum, SGM Al Novak, my dad Bing Wong and many others great martial artist. RIP until we meet again. ~ Douglas Wong

Tea With The Grandmasters