We are not making soldiers better warriors with inadequate “reality-based self-defense systems” that hold onto outdated techniques and training methods.

Perhaps the reason why our soldiers in Afghanistan are not able to decisively “win the peace” (the conflict against Taliban insurgents) is because they are failing to adhere to traditional warfare techniques and training methods that have proven valuable in past conflicts. In order to make our soldiers better fighters I have made a list of things that our military ought to be doing in order to be more successful on the battlefield:

1.- The old skirmish line was effective for thousands of years, so why not bring it back. If our troops would all line up, shoulder to shoulder pointing their weapons at the enemy when they pop their heads out from their hiding place, then surely the enemy would be cut down in mass or be intimidated by the sight of advancing rows of brave men.

2.- Too much money is spent on high-tech computer battle simulators and force-on-force training (simulated battle using marking ammunition, props, and realistic environments). More time should be devoted to following patterns used by Alexander the Great or Napoleon Bonaparte in their great battles of old. After all, these tactics worked very well back then, and there’s no reason why they won’t work now. Soldiers should commit the flanking movements and aggressive charges found in these great battles to memory through repetition, and practice the movements step-by-step, even if it means only visualizing the enemy (doing the moves “in the air” against imaginary opponents). They don’t need to go against another human being, because going through the motions is good enough, and it will adequately prepare them for all future battles. If the rigid patterns are performed well enough, it will carry them through a real battle.

3.- Our brave soldiers wear too much gear and cumbersome equipment. They should go back to cotton or wool skirts and leather sandals of two-millennium ago, or at least when they do their training. After all, wearing today’s boots and battle uniforms is a little too restrictive. Why not be comfortable in training? And then while they’re at it they should practice their battle maneuvers on fresh cut, flat lawns, and not on torn up debris-filled terrain where someone is likely to twist an ankle or fall into a ditch. 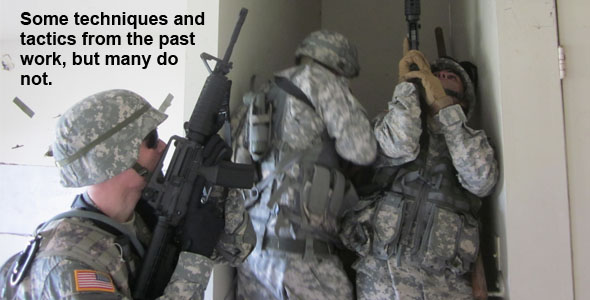 I could go on and on with more examples, but then you would think I have gone completely mad. Of course, all of the suggestions I made are truly preposterous. Please don’t take me serious on any of them. Anyone who has any inkling of military sense would laugh me to scorn if I actually believed these examples would work in today’s volatile situations. Even those who have no military experience can deduce that many of the techniques and training methods used in bygone years are antiquated and would be inappropriate for today’s warfare. So, why then do many of you who claim to be learning “reality-based self-defense” hang onto outdated techniques and training methods that evolved out of the martial arts of a past era, and then pass them off today as viable?

I’m writing this article for those of you have criticized me on various martial arts blogs or have sent me emails directly, or even those of you who are thinking of writing one in the future, lamenting over the fact that I don’t support kata, or that I’m opposed to traditional martial arts uniforms, bare feet, mirrored schools, or that I honestly believe that half of what people learn in most training halls have no practical application for the streets or battlefields. Over the years I have been criticized for my alleged “attacks” on the traditional martial arts. Now, don’t get me wrong, anyone in the public eye, like me, must have a thick skin. But, when it comes to this weekly column I think many of you out there still just don’t understand what the reality-based movement is all about. There are still a lot of you traditional based students and instructors who are hanging onto a lot of unnecessary baggage, despite the changing times.

Now, before you “traditionalists” start burning an effigy of me, let me just state that I am not against the traditional martial art, just as I am not against Civil War or Medieval reenactments either. They have their place and time, and many people are drawn to them. I love to watch them, and I’d hate to get a 15th century mace knocked up side my head. My problem is when people try to sell me on outdated techniques and training methods and have the nerve to tell me, and other reality-based practitioners, that traditional ways are the best way for modern conflict situations. Granted, there may be some “truths” that never change, which can be found in any system. For example, in modern warfare, fighting with a bayonet attached to the end of a rifle is virtually the same as it was 200 years ago; or 500 years ago for that fact. However, I have enough sense to know that I don’t stand in a skirmish line simply because one part of an ancient system works. The logical thing to do is to take the universal truths of conflict and strip away that which is useless and keep was is effective. Wasn’t that the message that Bruce Lee was trying to give in his day when he developed Jeet Kune Do, and what the military Krav Maga instructors were trying to accomplish at the Wingate Institute in the mid 1970s?

Occasionally I have to remind my readers, even those who attack my credibility on a regular basis, that there are three braches of the martial arts that have emerged in the last decade: 1. Traditional based 2. Sport based 3. Reality based. If you know what category you fit in, then you won’t get confused as to the goals of each, and you won’t be offended when I write about modern tactics and training methods.

Violence Must Be Practiced

Use of Force in a Fight: What Level of Force Can...