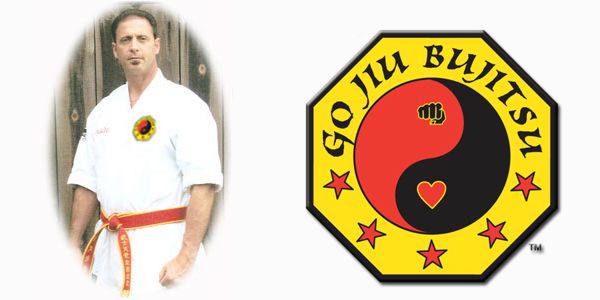 Looking back decades ago in martial arts we had pioneers and innovators such as: Gichin Funakoshi with Shotokan; Jigoro Kano with Judo; and Morihei Ueshiba with Aikido. Imagine what courage, confidence and passion they must have had to actually create, systematize and publicize a “new martial art”. Imagine the harassment and ridicule they must have endured in the beginning from their peers for “having the audacity to create a martial art”, especially since arm locks, chokes, punches, blocks and kicks haven’t changed for centuries. Imagine no more and come back to the present day and meet Dōshu Mark Colangelo with Go Jiu Bujitsu!

What is it?
Go Jiu Bujitsu (“The Way of Hard and Soft Martial Arts”) is a unique and effective American made hybrid/mixed martial art that appeals to traditionalist martial artists, mixed martial artists, as well as students of self-defense. Go Jiu Bujitsu consists of a perfect blend and utilization of 1/3 traditional Shotokan, 1/3 traditional Judo and 1/3 traditional Jiu Jitsu in the white belt through black levels. Once a strong foundation in the three component arts is achieved, its’ practitioners then learn the principles and fundamental techniques of: Aikido; Neko Ryu Goshin Jitsu; Wing Chun Kung Fu; as well as military and law enforcement techniques.

Naming the Style
Colangelo was a long time practitioner of Cuong Nhu Karate {28+ years, tested and promoted from Black Belt through Godan – 5th Degree – the style’s highest tested rank under that style’s founder}. In order to continue the creation of a martial art utilizing the principle and basic foundation of the “hard-soft or cuong nhu co-development theory” [historically from the foundations of Vovinam-Viet Vo Dao and Goju-Ryu], and the fact that his style blends both hard and soft Japanese martial arts, Colangelo named his martial art Go Jiu Bujitsu (The Way of Hard & Soft Martial Arts).

Multiple and Significant Levels of Black Belt (6;6;5;3;&1)
Before embarking on the monumental endeavor of creating a martial art, Colangelo, with love and passion, endured 30 years of hard, dedicated martial arts training. Despite four knee surgeries and two shoulder surgeries over the years some of Colangelo’s experience and achievements include: a 6th Dan in Neko Ryu Goshin Jitsu, a 6th Dan in USJA – JuJitsu and 3rd Dan in Judo under Professor Ernie Cates (founder of Neko Ryu, a USJA National Jujitsu Board of Examiner and 8th Dan Kodokan Judo) and/or Grandmaster Moose Cates; a 5th Dan and a Black Belt in Cuong Nhu karate and soft-style respectively under the style’s founder (and at the time became only the 7th person in the history of Cuong Nhu to earn that rank, and was only one of ten in the history of Cuong Nhu to earn the “soft-style” black belt as well); additional devoted and focused cross-training of 1 ½ + years each to Wing Chun, Tai Chi and Aikido; Cuong Nhu Sensei of the Year ’88 & ’95; Cuong Nhu Board of Directors (seven years); Cuong Nhu Instruction Manual contributing author; appearing in international martial arts magazines three times; as well as was a very successful competitor in katas (hard and soft), sparring, weapons and breaking.

Teaching Experience and Success
Colangelo began teaching martial arts part-time (2-3 days per week) during law school (3 years) and during his 13 years as a civil litigation attorney. Colangelo said, “In March ’94 I opened a full-time professional dojo and have taught full-time to this very day. I gave up the practice of law in order to pursue my love and passion for training and teaching martial arts because I saw what profound effects it has on the lives of both children and adults.” Not only demonstrating his personal martial arts skills in his achievements, Colangelo also demonstrated that he could effectively teach and share that knowledge with others by producing nearly 60 black belts in Cuong Nhu (more than any other instructor in the history of that style other than its’ founder) before breaking out with Go Jiu Bujitsu. Additionally, Colangelo: was a Guest Instructor at the 1997 Jujitsu America Annual Training Camp (as was Professor Wally Jay); was inducted as an Instructor into the United States Martial Arts Hall of Fame in 2002; and, received the Master’s Community Leadership Award form the World Amateur Martial Arts Federation, Inc. in 2006.

Instruction Manual Covering A to Z
As his passion, abilities and knowledge in martial arts grew and matured over his 30 years experience, Colangelo developed his own ideas, strategies, philosophies, direction and leadership style to the point of compiling all of them into a manual. He says, “It was a daunting and arduous task, but ever so rewarding when the manual was completed and sent off for copyright.”

A review of the Colangelo’s Go Jiu Bujitsu Instruction and Training Manual reveals as comprehensive and detailed a martial arts manual as one can find. Its’ “Introduction” includes a: dedication; detailed history; meaning of emblem/patch; about the founder section; maxims and code of ethics; salutation; testimonials; and life philosophies section. His manual has a detailed curriculum from white belt through black belt, as well as from first degree through ninth degree. It includes specific and detailed knife/club/gun defense and disarming sections. Colangelo says, “One unique aspect of the manual and style is a contribution from Shuseki Shihan Jeff Tirshfield (Soke Dai of Go Jiu Bujitsu) called ‘Justified Techniques – Progessive Escalation Responses’, which is a comprehensive set of escalating defensive responses to various attacks based upon the severity of the attack.”

“Everything imaginable was included such as: method of standardization; reference book list; board breaking requirements; time in grade/rank requirements for Kyu and Dan levels; belt symbolism; and titles”, said Colangelo. Black belt through third degree are “Sensei”, 4th degree through 7th degree are “Shihan”(master instructor), 8th and 9th degree are “Grandmaster”; the styles designated inheritor (Soke Dai) is “Shuseki Shihan” (top/head master instructor); and founder/head of style (Shuso and Soke) is “Dōshu” (master of the way). Dōshu Colangelo said that he, “did not want anyone in his style (including himself) to be referred to directly as ‘Master’ and wanted to leave the title ‘Grandmaster’ available for deserving and long-time Go Jiu Bujitsu pratitioners”.

International Recognition
Dōshu Colangelo, upon the advice and with the sponsorship of Professor Ernie Cates, took the risky step of submitting his Go Jiu Bujitsu Instruction and Training Manual to the World Head of Family Sokeship Council (hereinafter WHFSC) for review. The WHFSC is considered one of the most elite and prestigious martial arts Grandmaster’s councils in the world and which is composed entirely of 9th and 10th degree Grandmasters from around the world representing either a style that they legitimately inherited or created (such as Council Founder Grandmaster Frank E. Sanchez, and Grandmasters Ernie Cates, Stephen K. Hayes; John Pellegrini, Ron Van Clief and Gary Dill). The WHFSC rejects about 80% of the materials it receives, but after review, accepted the Go Jiu Bujitsu Manual and WHFSC members wanted to meet Colangelo.

Subsequently, Doshu Colangelo went to attend the WHFSC Awards
Dinner to honor and witness his mentor, Professor Ernie Cates receive the “Historical Martial Arts Figure of the Year Award”, but was surprised when he was put before a panel of Grandmasters and intensely “interviewed” (Colangelo say, “more like interrogated”) and was also required to present an on-the-spot comprehensive demonstration of his art to prove to the Council that he could “walk the walk, as well as talk the talk”. During this faze the Council usually rejects another 15-19% of its’ applicants. This was such an on-the-spot and surprise test for Colangelo, that Professor Cates lent him his own gi and tattered red obi. “It was like an alter-boy being told by the Pope to put on his robes and ring”, Colangelo said with amazement.

As a result, on May 26, 2007 Dōshu Colangelo: received the “Founder’s Award” from the WHFSC for creating the new hybrid/mixed martial art Go Jiu Bujitsu; was recognized as the arts Soke (Headmaster); was recognized as a 9th degree Grandmaster; and was welcomed as a new member of the Council. These facts and events provided immediate international recognition of Go Jiu Bujitsu as a legitimate martial art.

The Arts Core Philosophy
Colangelo said, “My purpose, through Go Jiu Bujitsu, is to create competent, well-rounded martial artists, and to positively impact and transform the lives of the arts’ practitioners by enabling them to ‘learn to make the seemingly impossible into a reality’ in their study of martial arts, as well as in all aspect of their lives”. The core of his arts’ philosophy is: the vision of “a heart-shaped world characterized by genuine, sincere and active love for one another”; supported by “pillars of love (thought, word and deed) and strength (mind, body and spirit)”; and, “with a foundation consisting of self-respect, self-discipline, self-confidence and self-acceptance”.

Any Politics, Harassment or Ridicule?
“Unfortunately yes! I had to file a Defamation–Libel Per Se lawsuit against one of my former Grandmaster’s sons, his martial art’s association, and one of his minion black belts in order to stop the childish attacks and what I considered defamation, to protect my reputation. In an ironic and sad demonstration of complete hypocrisy to my former-primary-style’s foundational philosophy, I was immediately ostracized, shunned and demonized for spreading my own wings just as that style’s founder once did,” Colangelo said in dismay.

“However, with the international recognition by the WHFSC, considering the reputations and caliber of its members, any ‘nay-sayers’ are merely ‘barking dogs at the caravan as it passed’”, Colangelo said. “People can have opinions and make comments, but that’s all they are, as empty as the air that expresses them. It’s those that create, take action, lead and produce consistent and long-term results that make the real difference in the lives of others”, Colangelo concluded.

Conclusion
Go Jiu Bujitsu has already spread to half a dozen dojos across the country in less than 2 years. While no one can predict the future of this new martial art, just as they couldn’t decades ago with Shotokan, Judo or Aikido, one thing is for sure. Dōshu Colangelo is a pioneer and innovator with courage, confidence and passion enough to create and step out into the martial arts world with Go Jiu Bujitsu. And now, we all have an idea of what it takes to “create a martial art”.

For more information about Mark Colangelo Setting Sun Dojo visit their listing on the Martial Arts Schools and Businesses Directory by clicking on the image on the left.

USAdojo - May 18, 2005
We use cookies to ensure that we give you the best experience on our website. If you continue to use this site we will assume that you are happy with it.OkRead more