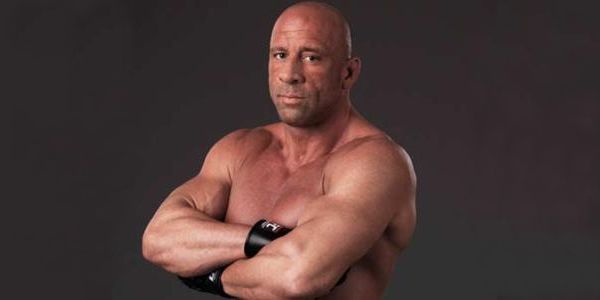 Mark Coleman was born in Fremont, Ohio, in the U.S. on December 20, 1964. He is an American mixed martial artist, professional wrestler, former NCAA collegiate wrestler and former Olympic amateur wrestler. In MMA, he was the UFC 10 and UFC 11 tournament champion, the first Ultimate Fighting Championship heavyweight champion, and the PRIDE Fighting Championships 2000 Open Weight Grand Prix champion. On 1 March 2008, Mark “The Hammer” Coleman was inducted into the UFC Hall of Fame.

It was Mark Coleman, along with Dan Severn, who proved that wrestlers can dominate the sport of mixed martial arts, and Mark is credited as the inventor of the strategy that came to be known as ground-and-pound.

Mark began freestyle wrestling as a teenager, and he was a two time Mid-American Conference wrestling champion for Miami University, in Ohio. In his senior year, he transferred to Ohio State University and won an NCAA championship. Coleman was awarded a spot on the US Wrestling team, placing seventh overall in the 1992 Summer Olympics in Barcelona, Spain.

Coleman made the transition from amateur to professional in the then new sport of mixed martial arts. He won his first two tournaments in 1996. He beat defending champion Don Frye at UFC 10, and at UFC 11, he beat Brain Johnston. At UFC 12, Mark became the UFC’s first heavyweight champion by submitting Dan Severn via neck crank.

Coleman made his first title defense at UFC 14, and lost a decision to smith after 21:00 minutes(regulation plus two overtimes). Coleman was unable to sustain his stamina throughout the long fight, and he took nearly a year off before returning to UFC 17, where he fought Lion’s Den fighter Pete Williams. The fight with Williams was another long and strenuous battle and Coleman appeared to be exhausted after 10 minutes, resting his hands on his knees during the fight. Taking advantage of Coleman’s fatigue, Williams landed a heavy kick to the face, knocking Mark Coleman out for the first time in his career.

After nearly eight months of recuperation and training, Coleman returned at UFC 18 to face feared Brazilian striker Pedro Rizzo. After 15:00 the fight went to the judges, who called the fight for Rizzo.

After a quick TKO victory over Allan Goes at PRIDE 13, Coleman faced possibly his toughest challenge ever in Antonio Rodrigo Nogueira at PRIDE 16. At 6:10 of the first round, “Minotauro” was able to catch Coleman in a triangle/armbar, breaking Coleman’s six fight winning streak.

Coleman would take nearly two years off following the fight with Nogueira, Spending time with his wife and children, and focusing on developing his martial arts training facility and stable of fighters at Team Hammer House, where he trained such fighters as Kevin Randleman, Wes Sims, and Phil Baroni. Team Hammer House gained a reputation of turning out world class fighters.

At Pride 26, Coleman returned to MMA competition facing Don Frye in a rematch of their meeting at UFC 10. This fight proved to be much tougher. Mark was coming back from a career threatening neck injury, but he ultimately won a unanimous decision victory after 20 minutes. Following the fight, Coleman apologized to the fans for the lack of action during the fight because he had spent the majority of the time taking Frye down and then maintaining positional dominace over Frye.

Mark returned to competition in PRIDE Total Elimination 2004 Heavyweight Grand Prix. He was the returning Grand Prix champion in the Open Weight Division. His first round match was against PRIDE heavyweight champion Fedor Emelianenko. Coleman was submitted by armbar at 2:11 of the first round, eliminating him from the tournament.

Coleman returned to fight in PRIDE 29: Fists of Fire in February 2005, this time facing Mirko “Cro Cop” Filipovi?. Suffering the second knockout of his career, Coleman fell to strikes by “Cro Cop” in the first round. In November of 2005, Coleman appeared in Bushido Europe-Rotterdam Rumble, Europe’s first Bushido event, and choked out Milco Voorn at 0:56 of the first round.

At PRIDE 31, Mark won a victory over Chute Boxe team member Mauricio “Shogun” Rua. With Team Hammer House member Phil Baroni in his corner, Coleman began the match by taking Shogun to the ground. At 0:49 of the first round, Rua got up and as he took the first step Coleman grabbed his feet. Rua fell awkwardly and broke his arm. Coleman continued to fight, peppering Rua with strikes before the referee stopped the fight.

On October 21 2006, Coleman once again faced PRIDE heavyweight champion Fedor Emelianenko at PRIDE 32: The Real Deal, the first Pride to take place in America. Mark lost via armbar submission at 1:17 of round two.

Coleman appeared with teammate, Kevin Randleman, on the US pay-per-view broadcast of the final PRIDE event, PRIDE 34: Kamikaze, stating that he intended to keep fighting.

At UFC 82, Coleman was inducted into the UFC Hall of Fame, making him the 5th inductee. Coleman announced that he was not retiring and would return to the octagon to fight Brock Lesnar on August 9th in Minneapolis at UFC 87. However, Coleman injured his knee while training, and was forced to pull out of the event. Heath Herring replaced Coleman for the fight.The main event of that card became a welterweight title fight between Georges St. Pierre and the contender Jon Fitch.

Mark Coleman appeared in the documentary The Smashing Machine: The Life and Times of Mark Kerr alongside his fellow fighter Mark Kerr.