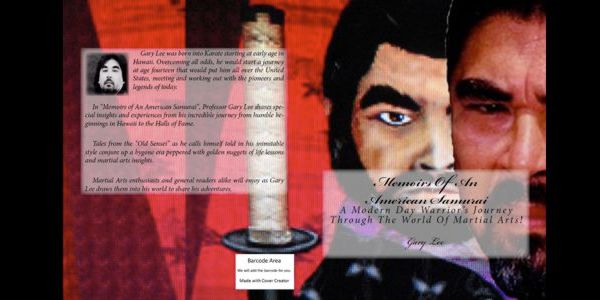 Gary Lee left Hawaii with a surfboard, a Black Belt, a copy of the 1969 Black Belt Magazine and dreams of being the best he could be. Memoirs of an American Samurai is about his journey from a tiny hut in Hawaii to working toward fulfilling his dream of building the Museum of Sport Karate.

Orphaned at the tender age of five and left in the care of a Karate Master in Hawaii, Gary Lee journeyed to the U.S Mainland, thirsty for knowledge and searching for his destiny. He spent 30 years winning on the tournament circuit and has worked as a fight choreographer and martial arts stunt performer on stage and on television. In Memoirs of an American Samurai, he chronicles his adventures as a modern day warrior. He describes in his inimitable style, the key lessons learned and insights gained during his incredible journey.

“Professor Gary Lee 9th Dan, Founder of The Museum of Sport Karate Masters, has Graciously excepted the award of ‘The Life Time Membership Award’, for his tireless work he has undertaken on forming this Museum of Sport Karate Masters in Preserving the History of Martial Arts in America, the acodales of your fellow American Martial Artists say’s it all, The Award is presented for long and dedicated service to preserving the history of Martial Arts, from The Traditional Okinawan Kobujutsu Association & Martial Arts Federation.”
Recognized by the International Ryukyu Karatejutsu Research Society