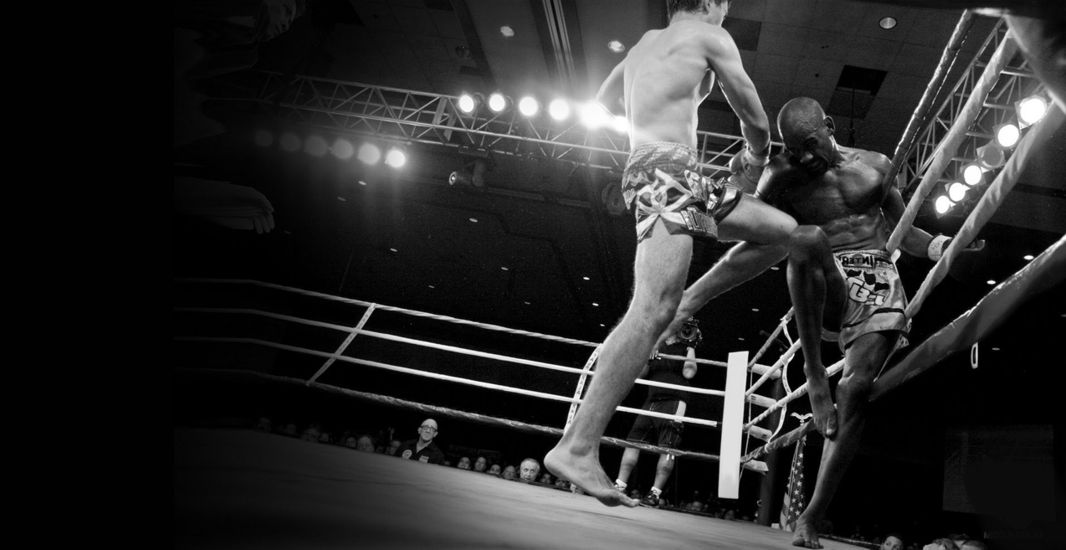 The ancient art of Muay Thai is synonymous with Thailand.  In Bangkok huge stadiums are packed nightly with exuberant fans that treat each fight as if they were at an NBA Playoff game. The highest rated television show is the weekly one-hour Muay Thai telecast in addition to a daily radio talk show dedicated to Muay Thai. With all this adulation, the popularity of Muay Thai goes unchallenged as the nation’s most popular sport.

Aside from the traditional ties Muay Thai has with Thailand another reason for its popularity is because of the gambling that surrounds the fights. Thai’s treat a Muay Thai fight the same way Americans do a day at the track.  There are however no betting windows or bookies, instead barkers holding handfuls of cash take bets from excited spectators. With each round a fighters odds may go up or down depending upon how he is doing. So, it’s sort of like handicapping a horse race as the race is in progress.

Once the winner is decided, the money is distributed to the various winners in the crowd.  Don’t ask me how they keep track of who gets what, I have no idea. I just watched in awe as thousands of dollars passed from hand to hand without a single dispute.

“Many people make much money from the fights,” explained one of the gamblers. “This is fun for us but it is also serious business. That is why we listen to the radio so we can find out how the fighters are feeling and to learn if someone is fighting with an injury.”

When I asked him about the way the money changes hands and if they ever get ripped off in the exchange his answer didn’t surprise me, “No one would intentionally cheat or pocket another person’s money. That would be very bad karma.”

No where is Muay Thai more honored than on the island of Phuket. At the recently opened FantaSea Cultural Theme Park in the Palace of the Elephants, the history of Thailand and Muay Thai is presented in a state-of-the-art live stage show.

Costing more than one hundred million dollars (US) FantaSea is an experience of unparalleled excitement.  “Fantasy Of A Kingdom” is a Las Vegas-style show complete with hundreds of performers, Muay Thai fighters, stuntmen, more than 30 elephants and a dozen high flying acrobatics on bungee cords performing high atop of the one-of-a-kind theater. All of this is wrapped around lasers, pyrotechnics and special effects, thus creating an unforgettable theatrical experience.

In the process of enacting the history of Thailand, the story of the origin of the country’s fighting art is unfolded during a breathtaking battle sequence pitting Burmese soldiers against Thailand’s army of Muay Thai trained warriors.

Brilliantly staged and choreographed the fight scene’s feature Muay Thai at it’s best. Kicks, punches and weapons are all used with stunning results, and when the battle is in question, the Thai’s call upon the nation’s symbol for help.  Moments later, like the Calvary coming to the rescue, in rushes more than a dozen elephants to aid the Muay Thai fighters. Together they defeat the invaders and vanquish their enemy, thus saving the country.

This alone makes “Fantasy Of A Kingdom” a must see experience. Muay Thai is however only one part of the fabric that when stitched together makes up the complex history of Thailand.  To understand Muay Thai, you must understand the roots from which it grew, and this show offers a wonderful insight to the art and the country itself. This task is magnificently accomplished through the shows traditional dances, performed by beautiful women in colorful costumes, magic and music.

While you’re visiting FantaSea stop off at the Golden Pavilion located across from the Palace of the Elephants. This is the world’s largest buffet, seating more than 4,000 visitors, and the chow is great. A taste of Thailand is the perfect set-up for the show and the excitement of Muay Thai.

At each turn of the road one can’t help but feel the influence of Muay Thai as you tour around the island of Phuket. The warrior creed got it’s start more than two hundred years ago with a famous battle between invading Burmese army and a group of islanders led by the wife of the Phuket governor who had just died. Khunying Mook and her sister, Khunying Chan, rallied the women around Talang to dress like men to fool the invaders. All of the men were off fighting in other wars on the mainland.  The army led by the two women was successful in repelling the Burmese and today a statue in their honor stands guard over the island on a roundabout on the airport road.

The locals believe that the sprits of the two sisters are still watching over their them and when passing the Two Heroines monument, they will offer joss sticks, flowers and prayers to the women who saved their island so many years ago.

Another place where history has been turned into theater is at the Phuket Orchid Garden & Thai Village. A colorful stage show pays honor to the women who fought off the invading Burmese soldiers. A nicely choreographed Muay Thai demonstration and colorful presentation of native customs and dances compliment the kicks and sword play.

Verea Nitsak is 35 years old and has been training in the fighting arts of Thailand since the age of 6.  He is a master of sword fighting known as Mai San. He works tirelessly with the performers to make sure that their moves are precise and accurate.

During the show one of the “warriors” uses a weapon that looks similar to a Japanese Tonfa.  However this weapon is mostly for defense, unlike the Tonfa which can be used for blocking and striking.

“We use it like a shied,” explained Nitsak. “The weapon can be used use it to strike but it is used mostly to block a sword attack.”

While the Japanese weapon allows the user to spin and twirl it freely, the Thailand weapon has an extra peg that is strapped to the arm of the user, thus making it a stationary weapon.  The Thai warriors would block the sword attack with the extremely thick wooden device then counter with a Muay Thai kick or sword thrust.

In addition to their stage performance, the Phuket Orchid Garden & Thai Village have an elephant show that is sure to delight young and old alike.

Another spot on Phuket for some great Muay Thai action is the Vegas Beer Bar. Located in the center of Patong Beach this giant open air bar seats more than 500 visitors and there is never a cover charge to sit and watch the action.  Every night from 8pm till 2am Vegas features non-stop Muay Thai fights.

While in Patong I was a nightly visitor to Vegas. Each night I would stop in for a few hours to watch the show. After spending a week training in a Muay Thai gym I felt a kind of comradeship with the combatants in the ring. However, something was different about these fighters.  At first I wasn’t able to put my finger on it, then one night it dawned on me that these guys were acting. What I was watching was the WWF of Muay Thai.

Once I realized that the fights were basically choreographed all my questions were answered. For example, I noticed that it was always the same handful of fighters performing each night. And, they never threw any kicks to their opponent’s legs, which is a favorite Muay Thai target.  I also noticed that they were not turning their hips into the many high kicks thrown to their opponent’s head. Instead, the Thai fighters were “snapping” the kick back like a karate technique. I’d just spent a week trying to break myself of that habit so I knew it wasn’t something that Muay Thai fighters did when fighting for real.

The reason why they didn’t kick to the legs was because of the damage such a blow would result in when being struck night-after-night. The fighters go about their task with great energy and speed. They fight at a controlled, but furious pace and there was no way they could throw leg kicks without making contact and still make it look real. The high “snap” kicks afforded them the ability to smack their opponent while controlling the amount of force with which the blow was landed.

These guys do this for tips.  After the “show” they walk around the audience shaking hands and accepting “tips” from grateful spectators. The Muay Thai fights at Vegas look like the real deal to the untrained eye and are a lot of fun to watch. Like their show biz counterparts in the states these fighters also have an “on stage” personality. However, unlike the extreme behavior of our TV Wrestling hero’s and villains, the Muay Thai fighters are more subtle. Two of my favorite fighters were what I called the David and Goliath match. One giant Muay Thai fighter was pitted against a much smaller fighter. The David and Goliath show was a real hoot. The big man knocks the smaller man down with a series of spinning backfists (another technique that is not often used in a real Muay Thai bout) then the little man bounces up and with a flurry of kicks to the head sends his larger adversary to the canvas.  The excitement generated from the packed house adds to the thrill of the moment as each fight takes on a personality of it’s own.

When you visit Phuket don’t miss an evening at the Vegas Beer Bar, and be sure to tip the fighters a hundred bucks (that’s about $3.00 U.S.) they’ve earned it!  These guys are top-notch athletes who afford the visitor a unique perspective to Thailand’s national sport. Check it out and be sure to have a camera at the ready because there are many Kodak moments to be captured as the fighters do their best to show off the art of Muay Thai.