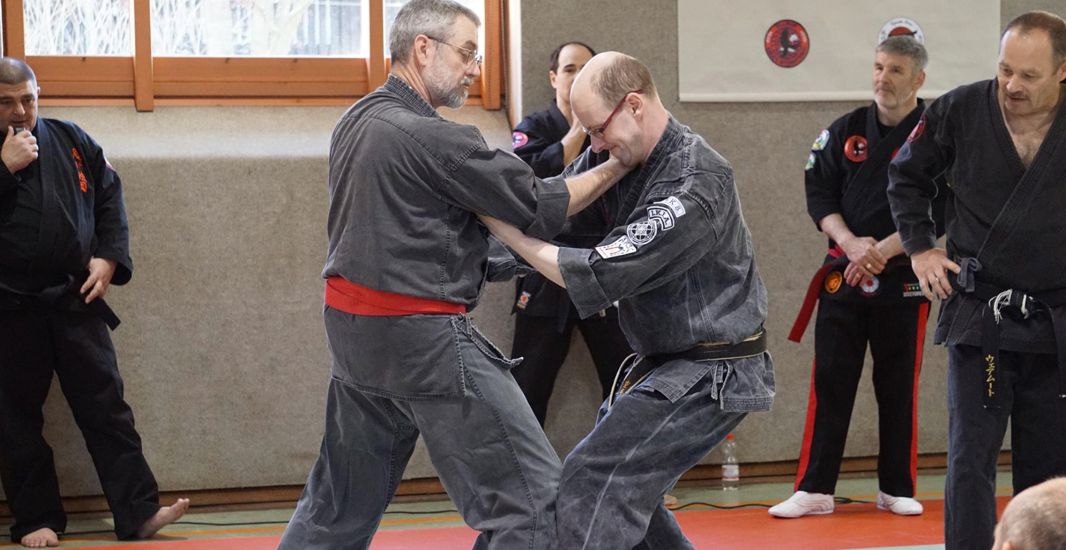 I prefer “old karate.” I mean this in three different ways.

When I first used the phrase, I had been training for about ten years. At that point I noticed that my movements felt familiar, well worn, broke in, “old” like that most comfortable pair of jeans, or like my battered fedora. This was muscle memory. Technique had become written onto the very fibers of my body. My nerves knew punching, kicking, moving, without any help from my brain. I remember thinking, at the time, how my karate had become old. It was an odd experience, because I found that karate was, well, soothing, to me. I found a relaxation from things like punching the makiwara (or a tree, or a wall, or…). And simply throwing kicks and practicing movement calmed me. It became my drug of choice. It was like an aged cheese, filled with flavor notes and complexity (Cheese? remember, I live in Wiscsonsin).

Secondly, I prefer “old karate” in the sense of the old ways (kodo or koryu). At first, I was drawn to the old karate by a kind of historian’s interest. What did it look like originally? Are there more ancient (and more authentic) ways of doing some certain kata. I threw myself into a study of such things, hoping to discover, or learn, or reconstruct an earlier version of what I knew. Of course, I didn’t have much access to historical sources. And I have to admit that I am glad. There are those who went off to Okinawa and sought out the oldest teachers and tried to find the oldest versions of kata. In this, they made great contributions to our understanding of the historical development of karate, and I am grateful to them. But, it seems to me that they also made a fundamental error – they assumed that, finding the oldest version of a kata would somehow make them wise.

I made the same error. At one point I was trying to learn as many kata and as many versions as I could. I was practicing 50 or 60 forms, and always looking to learn another “authentic” kata. Suddenly, one day, while trying to learn another such form, I realized that there was nothing there which wasn’t also present in multiple other forms I already knew. And I began to suspect that there was no secret form which would provide the key to martial wisdom. When I met George Dillman, I realized why. Because I didn’t understand what I was doing, the forms had nothing to teach. But, once I knew the function of form, rather than the form of form, I found I had too many kata. I stopped doing many of them, and still have too many for my own self (I need them for teaching and stylistic purposes).

So, “old karate” is not about which form one does, or how the moves are executed. It is about how the form is interpreted. It is about reclaiming original intent (which is the actual practical use of movement) and not some original pattern of movement. Sometimes, when I am talking about this meaning of “old karate” I use the term “classical” as opposed to “traditional.” The traditionalist seeks to mimic the style’s movements – the classicalist seeks to apply the style’s concepts.

And finally, I prefer “old karate” in the sense that I am old. I am 52, and I have been studying karate since I was 12. My kicks are still pretty snappy, but when I was in my prime, my kicks were so fast that you couldn’t see my foot (seriously). My stances are structurally better than when I was younger, but my legs are weaker, stiffer, creakier. So, I have to do a karate which works in two ways. First, it has to be something that I can do as an increasingly older man. And second, it needs to work effectively as a self defense method for an increasingly older man.

Hohan Soken told George Dillman (who, at the time was in his 30’s) to “exercise today, the same way you will when you are 80.” I think he was speaking of more than running and doing push-ups. I think he meant the entirety of karate training – train today, and always, doing what an aging and aged martial artist will continue to be able to do and apply effectively. So, I try to follow that advice, and in that way, I practice “old karate.”

I prefer “old karate.” It is the product of long years, it is simple, yet it has depth. It is not fancy or flashy, but, it continues to satisfy after all this time, and I see no reason for that to change. It is about interpreting kata.

Thanks for reading, now, go age your cheese (in other words, “Now, go train”).
Chris Thomas

The Four Stages of Kata Practice

The Importance of Kata