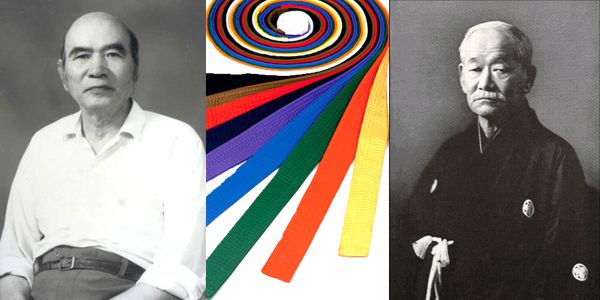 The most popular theory of the origins of the coloured belt system is that it was originated by the father of Judo himself ` Jigoro Kano `. Of all the various theories I have read, I believe that this is probably the nearer to the true origin that we will ever get.

The origins of the coloured belt system are discussed on most martial arts forums from time to time. Whilst there is some serious and honest debate, I am often amazed at some of the wild and stupid replies that many forum contributors add. Some claim, the colours are an ego trip for the student. How can it be an ego trip, if you join a dojo and that is their method of grading, as it still is my own organisation. We are teaching Traditional Aikido, and the coloured belt system is a part of that tradition of UK Aikido.  When you join a dojo you either follow their system, be it coloured belts or not, or move on, there is no choice.

I first started Judo in 1956 at the Abbe School of Budo which is the now known as the famous Hut Dojo.  The coloured belt system was an integral  part of the then grading system, as introduced and recognised by Kenshiro Abbe himself. The following year 1957, I joined the small Aikido group at the Hut Dojo, the gradings  were carried out with the same colour system as the Judo, once again with the approval of Kenshiro Abbe Sensei.  Aikido had started at the Hut Dojo. Which was the birth place of British Aikido. With the spread of Aikido throughout the UK by the only eight Aikido dan grades in the UK,  all based at the Hut Dojo, and as Aikido spread, so followed the coloured belt grading system. Every `single` Aikido dojo in the UK in those early years were graded in this way. If for example a student had come into the dojo and stated that he or she did not like the belt colour system, they would have found the exit faster than they had found the entrance. on yer bike.

I had one student who came into my own dojo in Bracknell, after watching for a while, he informed me that he wanted to join the club, he then said   “ I want to join, but I am not taking part in the formal bow as it is against my religion “   I informed him that we do not bow in submission, but out of mutual respect to each other. He was adamant that he would not bow under any circumstances.  I informed him that I had been teaching for nearly 50 years ( at that time ) and no one comes into my dojo and tells me how they as an individual will participate. I then showed him the door and asked him to leave,  he threatened to report me to all those lunatic kinds of  PC organisations, I reminded him that there were two hell’s  in Ellis.

As I stated at the beginning of this article I do not know the true origins of the belt system internationally as there are so many variations, all I know is from my own experiences from the early days of Martial Arts in the UK.

In those early days money was scarce, a student would not do as they do today, go and buy a new coloured belt after each grading. The sequence of colours were arranged so that the white belt could be dyed to yellow, and so on and on. I should add that with the dyeing there were some really weird shades of the colour system.

The first belt or grade was 6th Kyu = white belt  –  5th Kyu = yellow belt  –  4th Kyu = orange belt  –  3rd Kyu = green belt  –  2nd Kyu = blue belt  –  1st Kyu = brown belt  –  1st dan = black belt. Junior gradings  followed with  the same colours but with the mon system of grading with stripes in an effort to spread the gradings over a longer period, If a junior was for example a 5th kyu – yellow belt, after grading he would receive a mon or orange stripe, after four stripes he would eventually receive a full orange belt.  The highest grade a junior could reach would be 1st Kyu 3 black stripes or mons.  When a junior of this grade became a senior at sixteen he would receive a senior 3rd Kyu – green belt, and then work his way up the senior rankings. No junior could ever be graded to first dan.  I have never agreed with juniors being graded to dan grade. It is now so common place to see newspapers with a page headline  “ 7 year old  Boris is the youngest black belt in the UK “  we soon see another headline  `OH  No he’s not !! `  “ 6 year old Mabel is the youngest dan grade in the UK “.  I personally consider this form of publicity irresponsible by the instructor of the child.  I also consider this to be a form of child abuse. Boris and Mabel will be the target of every hard nose kid at school. I know from my own school days, there would be a long line waiting to level Black belt Boris.

Running a Martial Arts School: Things I Wish I Knew When...