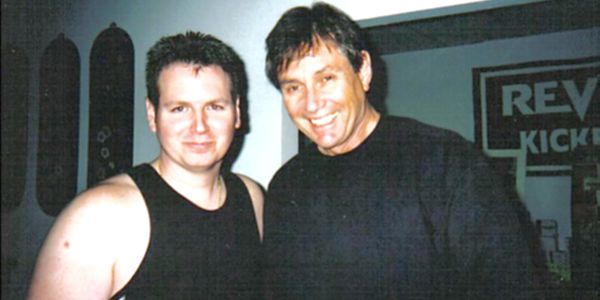 Paul J Bax has been involved in the martial arts since the early 1980’s and holds a black belt in Okinawa-Te karate.  After viewing Bruce Lee’s movie, The Chinese Connection, Bax dived into his study of Bruce Lee’s life and art of Jeet Kune Do.  His journey has led him to speak privately to numerous students of Bruce Lee who have kept in close contact with him on a regular basis.

In 1993, Bax wrote and produced the newsletter, The Jun Fan Journal, which had a very loyal following among JKD practitioners and fans of the action stars movies.  While publishing the newsletter, he met and became friends with John Little, the top Bruce Lee historian at the time.  Little and Bax corresponded frequently about the political under currents in Bruce Lee’s art of Jeet Kune Do.  Little conducted two highly informative interviews with Bax that laid the groundwork to form the now extinct governing body of Lee’s art, The Jun Fan Jeet Kune Nucleus. Little, per the request of Lee’s widow, Linda Lee, asked Bax to put together a binder of material from his archives that outlined what has been claimed over the years in regards to what was Jeet Kune Do for the first “meeting of the minds” among Bruce Lee’s most active and or vocal students. Bax had previously worked in a copy center where he was able to copy what he wanted, when he wanted. Kym Huie, Bax’s friend and coach, passed on his vast magazine collection to the author, which he then systematically documented every article about Bruce Lee known to man. Bax kept up with the magazines himself via subscriptions and like a librarian, cataloged each article according to the author and or subject. This material laid the groundwork to reveal what many have suspected for years: not everyone is telling the truth about their training and or time with Bruce Lee. Nor were some telling the truth about Jeet Kune Do as Lee himself taught the art.

In 1996, Bax released his book, Reflections Of Bruce Lee, a collection of his interviews with various students of Bruce Lee.  Although not widely distributed, the book was a hit with fans that enjoyed having all of Bax’s treasured interviews in one place. In 1997, Bax was one of only a few hundred people invited to the first Jun Fan Jeet Kune Do Nucleus seminar/banquet hosted by Lee’s family and students. To receive an invitation, one had to be personally invited by a member of the JFJKD board members. Both Linda Lee and LA Chinatown student, Steve Golden, invited Bax to the esteemed event. The seminar/banquet was a huge success with the hotel training area packed to the max. A dinner followed which was quite inspirational and motivational to all of the attendants. Bax proudly gave a copy of his book to Linda Lee, which she later included in recommended reading material via the Nucleus organization’s website and newsletter. After some heated battles on internet chat rooms with both practitioners who did not see eye to eye with his views and Linda Lee’s second husband (Tom Bleecker) Bax decided to take a break from his study of Bruce Lee and Jeet Kune Do.

He later returned with a vengeance when a friend summoned him to a popular JKD forum. After causing quite a stir, Bax was promptly banned from the site. Sometimes the truth hurts. He went on to start his own Internet chat forum, which is now called, The JKD Brotherhood (formerly known as, “The Paul Bax Show”). The forum, JKD Brotherhood, which has members from across the globe is honored by visits from such Lee students as Jesse Glover, Jim DeMile, Steve Golden, Pat Strong and probably a few others who want to remain anonymous. Participants in the forum also include well known second generation students such as William Holland, Tim Tackett, Chris Sutton, Lamar Davis II, Bill Mattuci, Tommy Carruthers, Joel “Chi Hand” Weingberg, Dr. Jerry Beasley, Rafael Figuero, Drew Howe, Bob Landers and many, many more.  The site was listed in Inside Kung Fu as “dot com of the month” and has had over a million visitors. His recent book, Disciples of the Dragon earned rave reviews. The book was a rewrite of his first book and included many more interviews, which included, James DeMile, Pat Strong, Leo Fong, Bob Bremer, Gary Cannaagan, Joe Lewis, Steve Golden, Richard Bustillo and Gary Dill (James Lee student).

Taekwondo: The State of the Art