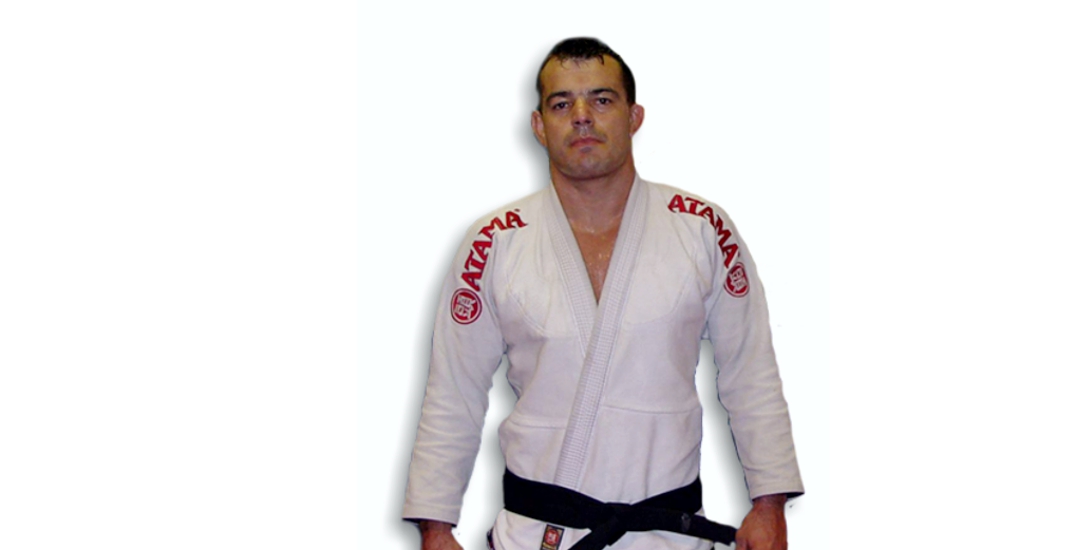 The Beginning
Pedro Carvalho was born on April 18, 1969 in Rio De Janeiro, Brazil. He began training in the martial arts when he was 14 years of age in response to the numerous physical confrontations which occur in almost every part of Rio. He first tried Tae Kwon Do, but he felt that it was difficult to use its techniques to defeat larger opponents, especially those who were also trained in Tae Kwon Do. Strength played too big a role in the arts effectiveness for his needs so he searched for an art were he would be trained how not to get hit, how to control the opponent, and how to finish him without doing more damage than was necessary. Additionally, this art needed to be applicable to an opponent regardless of size or style.

Jiu Jitsu in Brazil
Tuninho, who currently works under Helio Vigio, became Pedro’s first Jiu-Jitsu instructor and granted him his Blue Belt. Pedro then moved on to study his basics from the legendary Romero ‘Jacare’ Cavalcanti, who received his Black Belt from Rolls Gracie. After about a year Pedro left, Jacare, and was asked by his friend Inacio De Aragao, a Black Belt under Rickson Gracie, to visit Carlson Gracie’s School. Pedro trained and competed under Carlson, whose fighters are the best conditioned in Rio, for a few years taking 1st Place in many tournaments. Pedro received his Purple Belt under Inacio who then left Carlson’s Team.

Since Pedro Carvalho wanted to advance in rank and was interested in becoming an instructor, he left soon after Inacio and together they started training under Silvio Bhering and Alvaro Barreto, two of the best instructors in Rio. Pedro learned respect, direction, and some of the finest techniques available. He competed on Bhering’s Team but eventually left when he became short on money and his instructors were unable to compensate him for his running of classes.

Again Pedro Carvalho trained with Inacio on the side but now he began running his own club. Pedro soon began training with Renan Pitangy, a Black Belt from Rolls Gracie. Pedro and Renan sparred and trained together a lot. Impressed with his skills, Renan set up a competition between their clubs and Pedro’s Club won. Renan granted Pedro his Brown Belt and soon they became friends.

Pedro Carvalho’s desire to expand his knowledge and be part of a team lead him to De La Riva, known for his excellent guard techniques. De La Riva, a Black Belt who used to be under Carlson Gracie, invited Pedro to compete for his school. His fight would be against Kiko a Brown Belt on Carlson’s Team. The match was tough especially since Kiko was a heavy weight and Pedro only a Medium but a the end it was a tie. The decision went to Kiko, Carlson’s voice was too loud.

Soon after the fight with Kiko a Black Belt joined Pedro’s club. His name was Anibal Braga and he was both a seasoned competitor and an expert in leg locks. Pedro and Anibal sparred and after a while Anibal finally tapped out. Pedro had on occasion made Black Belts tap when he was a Purple Belt but this was different. Working with Anibal, expanded his knowledge and Pedro was soon granted a Black Belt by Anibal in January of 1992. On November, 22, 1993 Pedro Carvalho was certified by the prestigious Jiu-Jitsu Federation of Rio (F.J-J. RIO) and his certificate was signed by Carlos Gracie, Carlos Robson Gracie, Carlos Gracie Jr., Francisco Jose Mansor, and Jorge de Jesus Coelho.

For more information about Pedro Carvalho and Pedro Carvalho Brazilian Jiu Jitsu Academy visit their listing on the Martial Arts Schools and Businesses Directory by clicking on the image on the left.