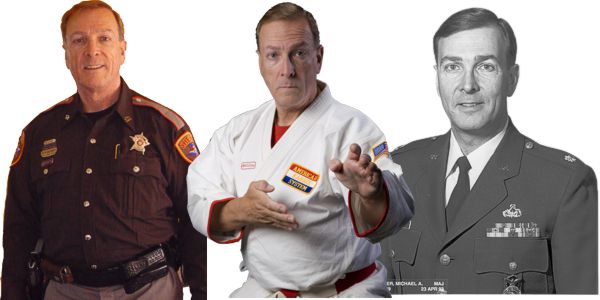 This past June (2011) I traveled back to Germany with my family after being absent for 23 years. The occasion of our last visit all those years ago was our departure upon completion of a three year tour for the U. S. Air Force. This trip was to promote and honor a true European martial arts legend.

Back in 1979 I found myself stationed in northern Germany during my second assignment to Europe. It was this tour that sowed the seeds of the American Karate System. After my departure in late 1981 the Hessisch-Oldendorf Karate Club was turned over to my senior student Dr. Rob Debelak. Back then Rob was a young two stripe airman who worked at the Air Station as a Chaplin’s Assistant. Rob met and began competing in German martial arts tournaments with impressive wins in both kata and fighting. As a result he acquire several German Wado Ryu students who wanted to train under him and learn our AKS style of karate. The rest is history, which you can read on both the German and American AKS websites.

Over the years the AKS in Germany grew in both numbers and importance within the German Karate Union, or DKV as it’s referred to in Europe. The key person behind this growth was Andreas Modl, and subsequently his Wado Ryu Sensei Herr Heinrich Reimer.

Heinrich has over 35 years of study, training and competition in Europe. He became the heavy weight champion in sparring and was named the Team Captain of the German National Karate Team. Later in his middle 50’s he was ask to rejoin the team and won his weight division yet again. Through both Heinrich’s and Andreas’ efforts the AKS is a respected organization and the only non oriental style recognized by the DKV.

Over the years both Andreas and Heinrich have traveled to the US to attend our annual summer camps and participate as guest instructors. Several of our senior AKS sensei traveled to Germany to participate in seminars and teach their members in turn.

Now that I’ve build you a watch in order to set the stage for this article I want to explain the view many dedicated European martial arts practitioners have about their American counterparts regarding rank. That view basically depicts many our martial artists as not serious, wearing uniforms that look more like a clown’s outfit, and claiming rank that is clearly beyond their age and years of practice. Add to this the fact that some of these questionable people claim to have black belt ranks that surpass 10th Dan, and you can easily see why the Germans and others in Europe have developed this opinion. Having said that they readily acknowledge the talent and skill of those who’ve come over to Europe to compete against their best fighters and walked away as the winners.

Another reason for this view is the difference between truly traditional training and the more sport dedicated approach many karate schools in American have taken. European karateka our first and foremost traditionalists, and sport competitors secondly. They also remain in their respective ranks far longer than their American counterparts.

I recently received a request from a guy who was 42 years old, had been studying for 34 years, and claimed to be a 10th Dan and varying ranks below in several different styles (6-10th Dans, 3-9th Dans,5-8th Dans,1-rth Dan, 6-5th Dans,7-4th Dans,4-3rd Dans,4-2nd Dans, and 6-1st Dans.). He was also the founder of one organization, president and head of a number of other martial arts organizations (42 by my count). I sent the request to the two assistant chief instructors for the AKS here in the USA, both 8th Dans, for their thoughts on this guy. One of them commented that by his calculations the guy would have to be at least 186 years old to have done all he was claiming both in studies, rank and organizations he either started and/or was the head of.

This is just one example of many that exist. Every serious student of the martial arts who has trained and studied for at least ten years can cite examples from their own experience. Is this the way we want to be seen by martial artists in other countries? Do we want to be compared to these pretenders and clowns? I for one do not. I’ve put in far too many years of sweat and blood to be painted by the same brush as these fools. I’m sure most of you share these same sentiments.

The question we must ask is how can we fix this problem? I can tell you that question has been asked for decades. I can also tell you from my 54 years in the arts that we have far too many fiefdoms out there with people not interested in helping fix the problem, only in buttering their own bread. Therefore the situation will continue unabated.

At 66 years of age I’m coming to the point where it really won’t matter anymore. I know there will be others who will come along and see the same problems and wish to fix them. They’ll start up yet another organization with this goal in mind only to continue the same cycle. Traditional martial artists in American are doomed to be saddled with these clowns and pretenders as long as we fail to unite and bring into being an orderly process for validating peoples rank, regardless of style or system. We must be able to legitimize ourselves in order to eliminate the impostors and establish American Martial Artists as a truly serious group on the world stage. Otherwise we will forever be seen by those in other countries as a group of martial arts who are more concerned with rank and status than the legitimacy of our respective styles.