When Chicago-based rapper Lupe Fiasco toured Australia recently, he found himself mixing with members of the Adelaide martial arts community after witnessing stick-fighting at the Adelaide Fringe Festival. 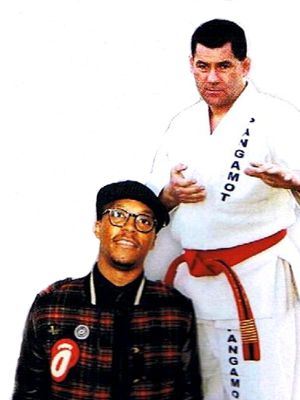 Lupe witnessed one of six demonstrations at the festival by a group of full-contact stick-fighters from the International Combative Martial Arts Academy, led by Grandmaster Vince Palumbo, 9th Degree Black-belt in Cacoy Doce Pares Eskrima. The hip-hop star was so excited with the groups’ street stick-fighting’ demonstration that he invited Palumbo and his students to his concert at the Thebarton Town Hall, and to his after-party.

“We had the best time, he was a fantastic bloke,” said Palumbo. “He told me that his father was a Grandmaster in martial arts, and also that he had achieved the rank of 2nd Dan in karate.

When I asked him what he was doing there at the Fringe Festival, he told me that someone had told him about our demonstrations… so he had to come and see for himself — and he liked it!”

Lupe and his crew recorded the stick-fighting A action on their mobile phones before inviting the martial artists to the gig, where Lupe even gave them a mention. According to Vince Palumbo, Lupe drew raucous applause when he told the audience, “I wanna welcome my stick-fighting homies to this concert tonight — these guys are awesome, and they’re real bad motherf***ers!”

Andre Magnum SportsKid of the Year 2011 – It Could Happen

Lebanese Olympic Judo Team Tefuses to Practice Next to Israelis