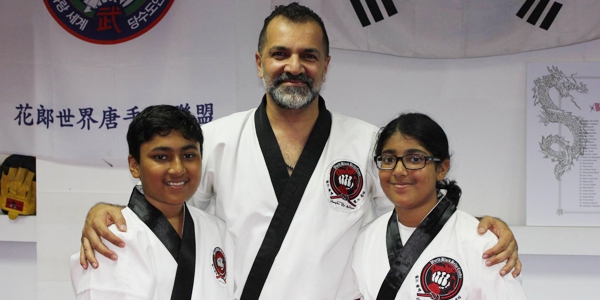 Master Rio Altaie is a 4th degree (Dan) Black Belt in Tang Soo Do, 2nd degree in Hapkido and has been certified by Grand Master Hwang Kee, the founder of Korean Tang Soo Do in Seoul, Korea.

Mr. Altaie has been certified as a self-defense instructor by Carlson Gracie Jr. and in Cardio Kick Boxing by NAPMA. He has been a practitioner for over fifteen years and also holds ranks in Tae Kwon Do and Jiu-Jitsu.

Mr. Altaie also is the founder and chief certifying official of the bureau of Arbitrators, Referees and Judges (BARJ). During his time as a teacher and a student, he has learned what makes a successful martial art program: a fun, non-threatening environment with an emphasis on positive character traits and good, strong self-defense techniques. Mr. Altaie is delighted to share his knowledge and love of martial arts, and looks forward to working with you!

Born on September 29, 1966 in Baghdad, Iraq, Asia. Started martial arts at 16 years of age, and after coming to the United States in 1985 started training in Tang Soo Do under the instruction of Mr. Mike Bissle, Kim Bissle and Booby Burbigde, in Monterey, CA. After moving to L.A. in 1987, Mr. Altaie trained and obtained his Red belt in Tae Kwan Do. Then he went back to Tang Soo Do at the Glendale YMCA under Mr. Distefano and Mr. Troy, then transferred to the Eagle Rock Studio undr Master Terry McMeekin where he earned his Black Belt in 1989 from the American Tang Soo Do Alliance with Master Dennis Ichikawa.

After achieving his 1st Dan in Tang Soo Do, Mr. Altaie got involved in Hapkido at CSULA with Mr. Mark Baily where he earned his blue belt. At the same time he headed the Glendale YMCA program. After Mr. Altaie tested for his 2nd Dan Master McMeekin offered him to manage the Eagle Rock studio. Three years after that, the two bought out Tarzana Karate, the first studio of the ATSDA. By that time Mr. Altaie was already a 3rd Dan Black Belt.

In 1995 four members of the alliance (Mr. Ercolono, Mr. Silva and Miss Von Monahoff) headed by Mr. Altaie traveled to Seoul, Korea, to train in original Tang Soo Do and to get certified by Grand Master Hwang Kee, the founder of the style. Mr. Altaie also trained in Hapkido and Tae Kwan Do with Korean Masters.

In 1996 he took over the Tarzana Karate program as Chief Instructor and got more involved with Kickboxing and Jiu-Jitsu. Some of the kickboxers he worked with are Don the Dragon Wilson, Pete Sugar foot Cunningham and Kathy Long, with the Machado Brothers and Carlson Gracie Jr. in Jiu-Jitsu.

Tarzana Karate was a Member of:

In 1998 Mr. Altaie tested for his 2nd Dan in Hapkido with the ICHF under Grand Master John Pilligrini after working with great Masters in Hapkido that included Dr. Il-Young Kim, the president of the Hapkido-Federation. The same year Mr. Altaie finally met with Mr. Chuck Norris in Chicago during the “Kick Drugs out of America” tribute.

To contact Rio Altaie and World Black Belts Center visit their listing on the Martial Arts Schools and Businesses Directory by clicking on the image on the left.