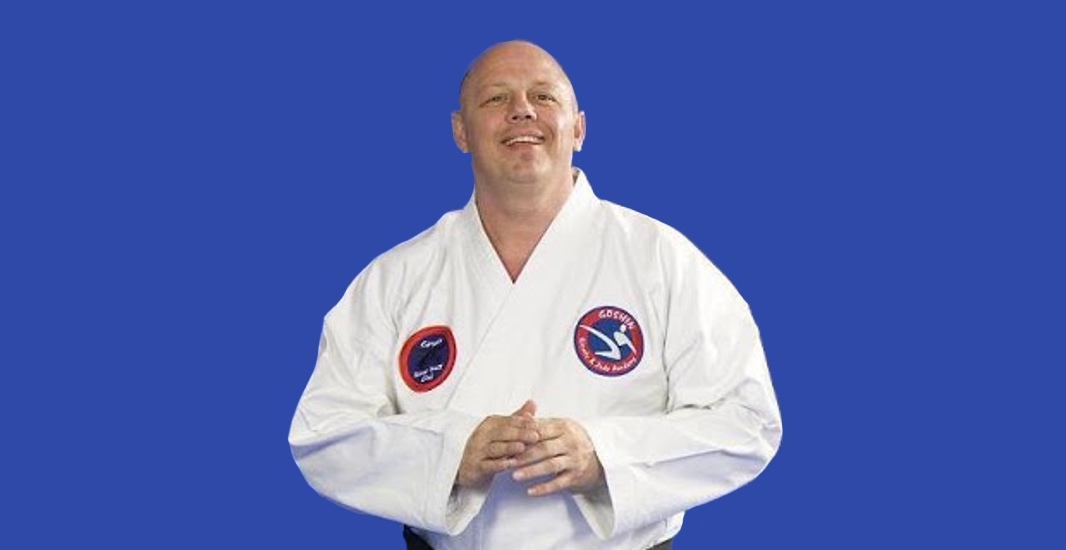 I first started training in 1970’s when I was 12 years old. I started with Wresting. I was inspired by a man named Dan Gable (Gable compiled an unbelievable record of 182-1, during his prep and college careers).

At age 16, I started to train with the Black Belts from Jung’s Tae Kwon Do Academy a satellite school that they ran in the basement of the Salvation Army on the northwest side in Cedar Rapids, Iowa. These Black Belts were Tournament Fighters/ Kick Boxing Champions that traveled the Midwest.

I stopped training when I went to college, got married and relocated to Scottsdale Arizona in 1986. Life was good until my 13 year old son started to fight in school. So I went to the closest Karate School and signed us both up. This was the fall of 1994. I was fortunate to find Goshin Karate & Judo Academy, Their primary focus was on Self-Defense (Goshin in Japanese means Self Defense) ground self defense, grappling and Bunkai which I later found out was the interpretation of Kata (Neither of which were taught from the Tae Kwon Do Black Belts.)

I excelled quickly in both Karate and Judo, the prior experience from my childhood came back quickly – It was like riding a bicycle. The Anderson’s (Mike & Cathy) allowed me to help teach in the beginners classes when I was a Blue Belt and turned over the Saturday morning classes to me when I was a Purple Belt after I completed the Instructor training program. I obtain the rank of Shodan on December 9th 2000.

Mr. Anderson became ill in 2004 and before his passing, asked me if I was interested in purchasing the school and continuing the tradition. I was fortunate to have the opportunity to continue on with “The Goshin Way” so in 2006, I became the owner and Chief Instructor at Goshin Karate & Judo Academy in Scottsdale, Arizona. I currently hold the rank of 4th Dan (4th degree Black Belt) in Okinawan Kempo, 5th Dan in Iss Hogai, American Jujitsu, Black Belt in American Kenpo Karate and a Black Belt in Judo.

I now chart the path for the dojo’s future. I have been blessed with the current student population of over 200 students, which we have maintained through the transition. I now set the curriculum for all classes, determine belt promotions and lead the adult and children’s classes.

My passion is for all things “Martial Arts” – This is what powers my daily training ethic and allows me to continue to grow as a martial artist through guidance from many sources in the Judo, Jujitsu, Jeet Kune Do, Kung Fu, Tai Chi, Police Training and the Karate community.

Our customers are telling us it is not about the trophies (since we rarely participate in competition). What they have said in our recent customer survey was that they feel safe at our school, that we have a trained and professional staff; it feels like family at our Academy, our equipment is top notch and it is a clean and friendly environment. More important they feel we are giving their children an advantage in life.

Over the last few years Goshin Karate and Judo Academy has developed a Life Coach/Personal development mindset to teach our students to manifest the principles of the martial arts. Integrity, Honesty, and Self Control are the guiding principles of karate, as given by Master Gichin Funakoshi, the father of modern karate. “The ultimate goal of the Martial Arts is not in victory or defeat, but rather in the perfection of the character of its participants”,

We have kicked off a New Leadership program with an on-line Leadership website where our students can document their community successes and acts of kindness (Goals and Achievements) they have performed outside of the dojo. The website is motivating the rest of the Academy to become “Action Heroes”.

Our school blog http://GoshinKarate.blogspot.com/ has become a resource for our community, our students, and their families. Mr. Boggs’ blog addresses issues about safety, eating healthy, listening skills, conflict resolutions, and dealing with anger to name a few.

We support the St Mary’s food bank and the Chrysalis Crisis Center which help the homeless and battered women and has recently kicked off our “Adopt a Family for the Holidays” Campaign . . . Here at Goshin – We are more than kicking and punching.