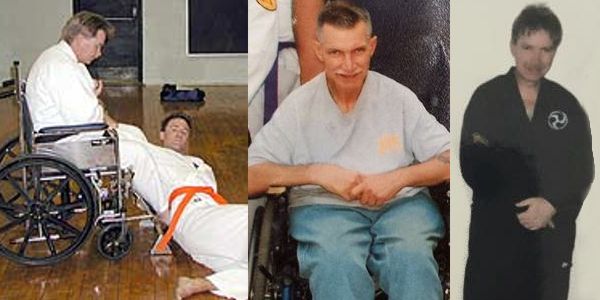 Sensei Ron van de Sandt became interested in martial arts when he was introduced to combat training while serving in the military in South Dakota. He was also the sparring partner of one of his friends who was formally studying Jujitsu at the same time. During the late 1970’s and the early 1980’s Sensei Ron van de Sandt studied some of Ed Parker’s American Kempo but did not seriously begin training in karate until around 1985 when he went to Claypool’s Academy of Martial Arts and began studying a blend of Tracy brothers Kempo mixed with Shorin Ryu karate known as Shorin Kempo.

Sensei Ron van de Sandt was involved in a horrific automobile accident in 2004 leaving him wheelchair bound. He continued teaching and operating the Sholin Karate Club and developed a self-defense system for the disabled called Kurumaisu Jutsu (literally “wheelchair fighting”). He passed his Nidan (2nd degree) black belt test before the Akari-ki testing board during their annual campout in 2006, demonstrating some of the wheelchair self-defense he had developed.