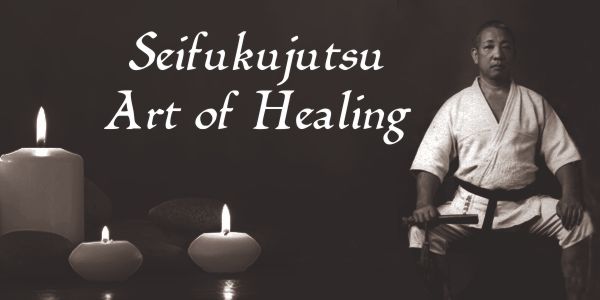 Seifukujutsu is the art of healing developed and propagated in Japan as much as 1200 to 1600 years ago. The origins of the art are rooted in Traditional Chinese Medicine. Seifukujutsu literally means to ‘restore and replace’ and consists of herbal medicine, of Nihon Kaifuku Anma (amma) (Japanese restoration massage), Sekotsu (bone setting) techniques, Sotai (whole body movement (kinesiology), hydro-therapy, acupressure, auricular therapy and reflexology. The Doctor of Seifukujutsu is trained in breathing techniques as well as exercises to effect muscle balance and restore tone.

To become a Dr. (Isha) of Seifukujutsu is a process of learning all of the above as well as diagnostic techniques including tongue (Zetsu Shin), pulse, abdominal, back and meridian (Setsu Shin), facial, visual (Bo Shin), among others. Just as in the martial side of the arts, an in depth understanding of anatomy, physiology, and pathology is required. The usual number of hours to reach ‘Isha’ (Dr., Practitioner, Physician) is generally 2000 hrs. When one trains in the martial arts, the training never stops. A concept lost to the martial artist in the west.

Tradition of training is based on being mentored by a Master or small group of Masters in a personal format. This system has been used for hundreds of years and is still in practice today in parts Japan and surrounding areas.

There are many forms of Japanese healing, but none are as in depth or complete as Seifukujutsu, the other side of Jujutsu.

The History of Seifukujutsu Art of Healing

During the Asuka Period (552-710) Buddhist monks from China began to influence the people of Japan. As time went on, the monks of Japan were exposed to the ‘igaku’ (medicine) of the Chinese and Koreans. During the Nara Period (710-794), the Buddhist and Shinto priests incorporated the folk medicine of Japan and the Chinese medicine. As with all things Japanese, the art of medicine was refined to its highest level. You might say it was “Japanized”. When the Heian Period (794-1185) emerged, healing techniques were protected by the bushi, (warrior class) just as they protected their fighting techniques. During this time, the monks and priests sought solitude and became more reclusive. The training of the religious factions became more specialized and, as conflict with the governing factors became more frequent, even the arts of bushido were developed to the highest standards.

From the Kamakura Period (1185-1333), to the Tokugawa Period (1600-1853), the healing arts remained mostly with the religious factions and the bushi, (warrior) class. From time to time you would hear of an ‘Oisha’ (physician or practitioner), in the employ of the imperial family or other hierarchy, but for the most part, they were few and far between as the government was in conflict with the religious groups for controlling the direction of the country.

Over many years the monks continued to develop their healing techniques. The monks of the mountains were then known as ‘Shugenja’ (men of magic). The monks healing talents were regarded as mystical. They were able to heal men instantly on the battle field and it was as though the men had never been wounded at all. As time passed, these “men of magic” lost their bid to direct the country, however, their medical expertise was passed down through generations of warrior clans and later merged with the imperial class to bring the healing arts to the general public. Even today, evidence of the shugenja can be found along the mountain of Japan. The miko, (healers), spread ‘Seifukujutsu’, but eventually it became a cultural treasure and was protected from outsiders as much as possible.

Seifukujutsu has been practiced in its present form for about 1600 years. It has been used for maintaining the normal functions of the body, for healing anything from paralysis to malaria. The practitioners of this art are considered the premium miko of the culture for they use non-invasive, natural techniques to achieve healthy patients, families, and communities.

The levels of instruction were done in the fashion of master to apprentice and were passed down as the student gained experience and the trust of the master. When the shugenja miko masters took an apprentice, they were taught the value of keeping the household clean and the treatment area stocked with essential inventory. The apprentice was also shown the ‘Kaifuku Anma’ and practiced on training tools After the necessary first year (or sometimes more) of learning this dicipline, they were trained in the

Just as the 2nd level mentored the 1st level apprentice, so the 3rd level mentored the 2nd level. The 3rd level was the done by trainees with years of experience. This was diagnosis. Because it was so critical, this level was considered sacred, as a mistake could result in aggravating the illness or even in the death of the patient. The 2nd level trainee was only allowed to watch the procedure for the 1st year and then was given the opportunity to learn under the scrutiny of the upper level mentor. The mentor would diagnose after the student so the corrections could be made and once again checked by the trainee. The training went on for 5 levels including ‘Kampo’ (herbology +), Mogusa (moxibustion), Cupping, etc.

As each trainee passed his level of introduction, another would take his place and he would move to the next level of instruction. When one reached the 5th level, you would train for several years and then be granted the title of ‘Oisha’ (physician or practitioner). They were then able to practice on their own without an overseer.

Seifukujutsu today is taught and practiced in much the same manner as in the past. The art was first introduced into the Western world through the territory of Hawaii. The man most responsible for the propagation of this healing art was Henry Seishiro Okazaki. He practiced the art in the 1920s up until his death in 1951. He was world renown for his healing techniques and was even approached by Pres. Franklin Roosevelt to be his personal physician. The students taught by Master Okazaki were many, however, most of them did not receive the complete training in the art of Seifukujutsu.

Some of the more famous students of Master Okazaki were Richard Rickerts, Bud Estes, Sig Kufferath, Jack Wheat, and Carl Beaver among others. Not all of these students received training beyond the basics.

For the most part, they were trained in only the Kaifuku Anma, (restoration massage). As the years have passed, the art has been passed on by so few in its complete form that most people think the Kaifuku Anma “is” Seifukujutsu. As you can see, most practitioners in the United States today, only practice the Restoration massage. If you are looking for instruction in the ‘massage’ there are several martial art organizations that teach the basic introduction massage. The complete art is still practiced in Japan and is considered one of the highest levels of medicine in Japanese culture. To be certified an Oisha in Seifukujutsu requires a minimum of 2000 hours of training and it is still done in the traditional mentor- apprentice fashion in most places.

The art can be found in a few places in the U.S. in its complete form but the practice has to fight for recognition as an alternative healing art as most places in this country misrepresent what it is. It is not massage in the Western understanding of the word. It goes far beyond massage. If we are to bring this art form into the forefront of alternative medicine, we must make the public aware of this amazing art. Words of advise when looking into training or treatment in the art of Seifukujutsu; Seifukujutsu practitioners practice much more than just the restoration massage. The basic massage can work miracles but, it is only the tip of the iceberg and it is not Seifukujutsu.

Aikido: The Art of Peace

USAdojo - January 5, 2000
We use cookies to ensure that we give you the best experience on our website. If you continue to use this site we will assume that you are happy with it.OkRead more