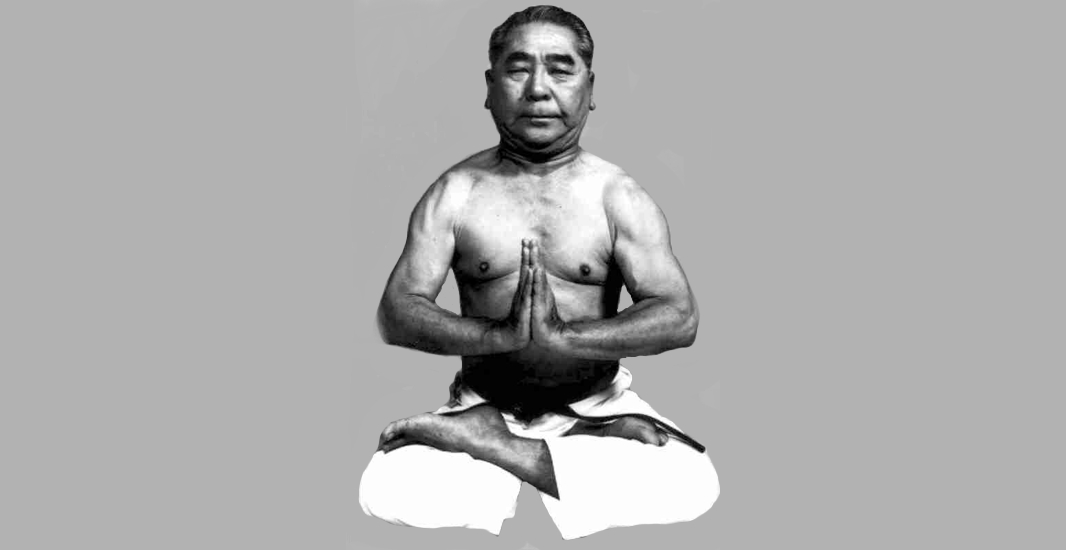 Seikichi Toguchi Sensei was born in Naha on May 20, 1917. He began studying martial arts learning the basics of Okinawan Te from his father.  He then began his study of Goju ryu at the dojo of Seko Higa and studied with him for 33 years. He continued to study Goju Ryu Karate Do with Miyagi Sensei for over 25 years until Miyagi Sensei’s death in 1953.

Seikichi Toguchi studied until he was drafted into the service at the beginning of World War II. Returning home in 1946 to a devastated Okinawa, Toguchi took in Higa, who introduced him to his wife to be. In 1949 Toguchi help Higa open another dojo and was given the title of Shihan.

When Miyagi had returned from the war he had lost three children and his most senior student. He began teaching at the police academy. Before he died, Miyagi passed on all his advanced kata and teachings to Toguchi, one of the more important being kaisai no genri or the theory and set of rules to extract primary fighting applications (oyo) hidden in kata. This teaching explains how to unlock the hidden techniques of the koryu kata.

In 1953, after the death of Miyagi, his senior students formed the Karate-Do Goju Association with Meitoku Yagi as chairman and Seikichi Toguchi as Vice Chairman.

In 1954 Seikichi Toguchi opened his first Shorei-Kan dojo where he taught many American soldiers from the Kadena Air Base which was near by his school. A more progressive teaching system had to be developed to overcome the language barrier a Seikichi Toguch further developed the system of kata adding bunkai and kiso kumite to help explain the application of kata. Many of Seikichi Toguchi students were the early pioneers of Okinawan karate in the United States.

In 1956 the Okinawan Karate-Do Federation was formed and Toguchi was sat on the board of directors. By 1960 Toguchi moved to mainland Japan to spread the art of karate and Shorei-kan. He began moving to Okinawa in the winter and Tokyo in the summer. He first practiced outdoors at the Hikawa Shrine where he developed the kata Hakutsuru No Mai. In 1962 the first Shorei-kan dojo was opened in Tokyo in Meguro Borough and in 1966 Shorei-kan Hombu Dojo Tokyo was built.

There were Shorei-kan students and instructors already in the United States , such as Jay Trombley in Texas and John Roseberry, but Toguchi still sent Toshio Tamano to the U.S. in 1969 as the representative of Shorei-kan. In 1972 Toguchi sent Tomoaki Koyabu to Canada to teach Shorei-kan.

Over the years Seikichi Toguchi and his wife Haruko Toguchi traveled to both Canada and the United States. Later on Tamano moved to Milan, Italy to spread Shorei-kan throughout Europe.

Seikichi Toguchi Sensei passed away on August 31, 1998. He was the last living Okinawan to receive the title of bushi, a title also held by his teacher, Chojun Miyagi.

USAdojo - March 3, 2006
We use cookies to ensure that we give you the best experience on our website. If you continue to use this site we will assume that you are happy with it.OkRead more