The line between a journeyman or practitioner and a master practitioner is a fine one. As one advances into the dan ranks he’ll begin to realize that the farther he goes the slower and more deliberate his journey. In the more advanced ranks, sandan (3rd degree black) and above, progress is in near microscopic increments. That’s because one has mastered the kihon (basics) and is now fine tuning his art or refining his expertise. “This is a lifetime’s journey.” Perfection, in the arts is always that elusive one punch away.

As Christian martial artists or as Christians period, we are to include the Holy Spirit in everything we do. Realizing that, “a man can not serve two masters,” we shy away from the Oriental spiritual mystique that is so much a part of the classical martial arts. So, you may wonder what I mean by spirit boxing. The origin of many of the classical, Eastern martial arts were in Buddhist or Taoist temples. Because of this the study of their arts had a deep spiritual side. Shorinji Kempo was actually classified as a religion and was part of Konga Zen Buddhism. Master Ueshiba, the founder of Aikido was a Shintoist priest. Even today, many classical martial arts adhere to these principles and include pagan rituals and ceremonies as part of their study. Taking this in consideration, let me explain what I mean by spiritual boxing.

As I stated before, as Christians, the Holy Spirit should permeate every area of our lives. Even in the study of the martial arts, there should be a level of Godliness involved. Spirituality is what separates the Christian martial artist from trained street thugs in the making. Our spirituality gives us guidelines, principles and limitations. As an instructor, I am careful about who I teach. My students don’t choose me, I choose my students. It is not my intentions to turn out street fighters or aspiring assassins. I am not interested in producing fighters but I do want to help shape capable, confident and responsible human beings.

In the internal martial arts such as Tai Chi Chaun, Pua Kua, Hsing I and even aikido, chi or ki is emphasized. Much of this has to do with breath control, concentration and focus but there is also a spiritual side to this. Chi Kung, an exercise used to develop chi is a type of spiritual meditation in motion. It has its roots in Taoism and as such shouldn’t be practiced by Christians. The same is true about Yoga and Zazen (Zen meditation) both of which theoretically help in developing the chi. Even in the Karate kiah (spirit yell) and kime (focus of the ki), focus is emphasized. While all martial artist use sudden and loud exhalations and try to focus their power into a defensive or offensive technique we must separate ourselves from the underlying spiritual principles of these Eastern arts.

So, what do I mean by spirit boxing? First of all, let me define boxing. By boxing I mean any pugilistic martial art be it Kung Fu, Karate, Kenpo or its Western equivalent, American and European boxing.

There are several definitions of spirit. In its truest form spirit has to due with God and our connection to him. When God breathed breath into man’s nostrils, he breathed his spirit into him. In this sense we are God’s offspring’s. As we, as Christians, know, the spiritual connection to God was severed by disobedient man but can be reestablished through Christ. The other definition of spirit, according to Webster is, “a dominant tendency, intent, mettle or courage”. This may seem totally opposed to the Godliness aspired by Christians but these are the attributes of God that we should emulate.

Without this focus, courage and resolve, we as Christians, would be moved and thrown off track by every change in of wind. We are vertebras, which is to say we have backbones. Because of this, we can brace ourselves and resist opposing forces. Our spiritual resolve or backbone, gives us the ability to resist evil intent, whether it comes in spirit or human form. We have a right and a responsibility to resist evil in what ever form it may present itself.

Now, let’s see how this translates into the martial arts. When faced with an attacker, we are facing a threat to our right to be unmolested and our physical and mental well being. This violates our right to choose. The right to choose to be happy, safe and secure. This violates our God given freedom of choice. God himself will not violate that and no human being or devil in hell has a right to compromise that which God has given us. Because we are facing evil (which in essence is spiritual opposition) as well as the threat of physical attack, we must react with opposing effort and with spirit.

When faced with a physical threat from another person, our fight isn’t just in the natural arena. We are facing the person and the spirit that drives their need or desire to violate our right to go about our business unmolested and unharmed. When we respond we don’t respond with malice or anger. We only strive to turn away the harm that is directed towards us.

As moral and Godly people, we do what we need to do to avoid harm and to contain the situation but we don’t strike out with evil intent. When we respond we respond with righteous indignation and with total commitment. Not so much to harm our attacker as to prevent harm to ourselves.

In actual combat, every strike must be done with intent and purpose. We may not be trying to maim or kill an opponent but we must be intent on stopping and, if necessary disabling him. We commit ourselves to this goal with total purpose. Otherwise, we have lost before we throw the first punch.

I grew up in the back alleys and side streets Of Chicago. Like every city there are bullies whose purpose is to embarrass and humiliate you. Breaking their necks or destroying their knees for a minor affront isn’t justified. If you can’t deescalate the situation or walk away, you do only what is necessary to deal with the problem. On the other hand, when faced by a would be kidnapper, rapist or drug crazed maniac, a slap on the wrist will not stop the assault. You must be ready and willing to do whatever is necessary to contain the situation. You approach your task with total commitment and spirit, knowing that you are in the right and God is on your side. It may sound idealistically stereotypical but that is the way we must approach these types of situations. You may be able to talk a halfway reasonable person down, but when you see the devil in their eyes you must realize that you can’t reason with the devil.

Spirit boxing is a state of mind but it “can” be learned and practiced. It has to do with more than directed anger or with adrenaline. It has to do with focus, purpose and total intent. In the old traditional schools of karate, they practiced the one hit kill. We may or may not be able to accomplish such a feat but in combat, every strike must be delivered with that kind of intent. Power comes from the torque of the waist, the thrust of the rear leg, penetration of the target, a momentary tightening of all of the body’s muscles on contact and a shout that tightens the diaphragm, focuses our intent and ties everything else together. That is sound kung fu or karate but it that alone isn’t the source of our power. What we do we do in “spirit and truth”. Our efforts are augmented by our inner spirit. We may use our body’s weapons to stop an attacker but remember, my spirit warriors, “The weapons of our warfare are not carnel, but mighty through God to the pulling down of strongholds” (II Cor. 10:4). “And finally my brethren, be strong in the Lord and the power of his might. For we wrestle against flesh and blood, but against principalities, and powers and the rulers of darkness in this world and spiritual wickedness in high place” (Eph.6:10&12). 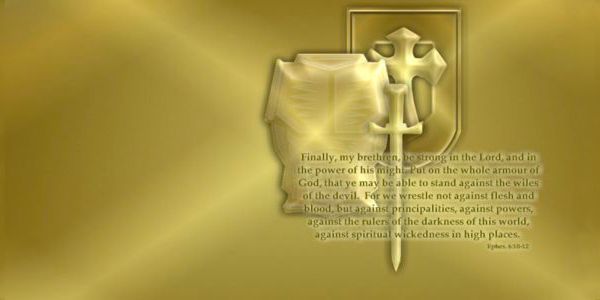 Through all of this, my Brothers, remember who your real enemy is. Though attacked and forced to deal with an attacker, remember who we truly strive against. We have to love the very one who we are forced to oppose in combat. Why? Because we know that he is not our real enemy.

As soldiers in Gods army, be ready to meet and oppose your real spiritual enemy. Find your strength in the God of your salvation and be ready to oppose that enemy, if necessary, to the death. My Brother, that’s real spiritual boxing.

Train hard, my Brethren and go with God.