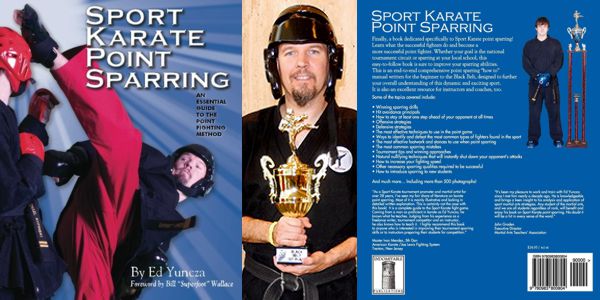 Sport Karate Point Sparring – An essential guide to the point fighting method is a book dedicated specifically to Sport Karate point sparring! Learn what the successful fighters do and become a more successful point fighter. Whether your goal is the national tournament circuit or sparring at your local school, this easy-to-follow book is sure to improve your sparring abilities. This is an end-to-end comprehensive point sparring “how to” manual written for the beginner to the Black Belt, designed to further your overall understanding of this dynamic and exciting sport. It is also an excellent resource for instructors and coaches too.

Some of the topics covered include:

And much more… Including more than 500 photographs!

About the author:
Ed Yuncza is a Trenton, New Jersey-based professional martial artist with more than 25 years of training. He is the owner and chief instructor of E.Y. Martial Arts & Self-Defense Concepts, L.L.C. located in Mercerville, New Jersey.

Ed is also an inducted member of both the U.S.A. Martial Arts Hall of Fame and Action Martial Arts Magazine’s Hall of Honors. He is a frequent contributor to Black Belt Magazine and has been writing for the magazine since 1995. He has also written for other martial arts publications such as Inside Kung Fu magazine.

Ed has been employed in the Information Technology field since the mid 1990s and currently works as an IT Manager at Princeton University. When he is not working, he enjoys spending time with his family.