You never know who you’re talking with when you’re talking to a child. They may be a professional athlete some day, the one who finds a cure for cancer or simply the person who inspires people to makes a difference in the lives of others.

Traveling to karate studios throughout the United States and Canada gives me the opportunity to photograph the most amazing people in the world. I love to photograph the instructors and the higher black belts doing what super heroes are made of, but if it wasn’t for the children taking martial arts, my interest in photographing martial artists would be short lived.

When they step in front of my camera, I swear I can see exactly who they are. In most cases, though, they just haven’t lived long enough to understand the importance of who that person is. But this weekend I met a young man who is no longer a child, but he was when he started karate, and before he made his black belt he began a struggle which I believe he is starting to win. He’s in a small town about a six hour drive north from Atlanta.

Russell Springs, Kentucky doesn’t seem to be in much of a hurry to leave the comfort of their rural roots. Although, one third of the population live below the poverty line I can’t say that it’s necessarily a bad thing. Ok, so you won’t find a fancy steak house or a Starbuck’s in Russell Springs, but what you find instead is genuine hospitality, quiet down-home politeness and old fashioned manners, the type I knew as a kid when a man held the door open for a woman and stood up when she entered the room. Nothing ever happened so fast, back then, that you didn’t have time to sit out front just to watch some small piece of your world go by. Well, that’s what they do in Russell Springs, Kentucky. And now, on this stretch of road as far as the eye can see, flat farm land lies beneath the puffy white clouds perfectly placed on a bright blue sky. The look is that of the old time rural life, of when I was growing up and people didn’t lock their doors or even roll their car windows up at night. In Russell Springs, I didn’t pass one stranger on the street or in a store, that didn’t look me in the eye and smile. And when they did, I felt the warmth of my Uncle Bill’s hand on my shoulder when I was 9 years old, patiently watching the bobber on my fishing line start to jiggle. I could see my Aunt Francis hanging the wash on the line in the back yard while my grandmother, in her long dress and apron, holds the screen door open with her hip and makes one final sweep of her broom. The life here in Russell Springs, Kentucky brings a familiar image to mind giving me the feeling that I know these folks and that they’re not any different than my friends and family back in the time when I lived on the farm. Yes sir, I can feel my early days in Missouri right here.

I was sixty miles west of the main highway through the Daniel Boone National Forest, north of Lake Cumberland, looking for a karate school. There were cows and horses grazing on both sides of the highway, crops growing in the fields behind them but no karate school. I noticed quite a few church’s along the way, too, but what was more interesting was the number of barns completely painted with scripture and images of Jesus and the Cross.

The address numbers, on the few and far between mail boxes, indicated I was close to my destination but I just couldn’t picture a karate school being out here in the pasture. I slowed down and looked for a piece in the road, in which I could turn around, since I was sure I had to be going in the wrong direction. That’s when I saw a little group of buildings way ahead of me on the right and I decided to turn around there, instead of taking the chance of getting stuck in a ditch. 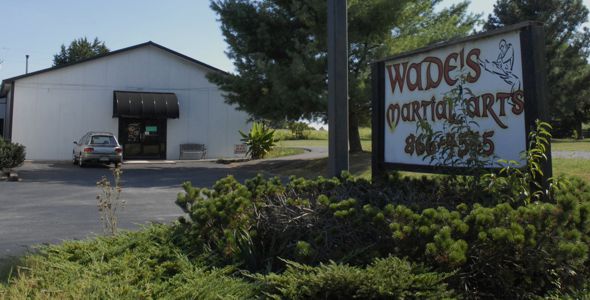 As luck would have it, this group of buildings had the following signs, Wade’s Gun and Furniture, Wade’s Pawn Shop, Wade’s Family Fitness and Wade’s Martial Arts. I reached my destination. 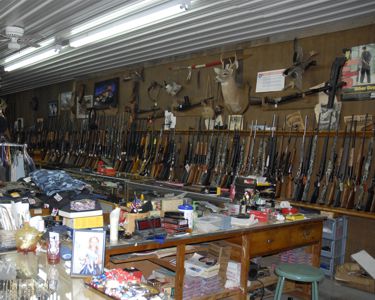 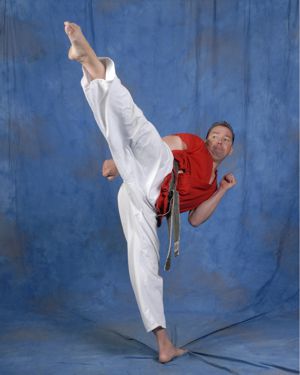 John Wade was the instructor I came to see. Meeting all the others was an added bonus. John’s family owned the stretch of land their business’ were on, along this part of Highway 80. And, John’s mother, Fay, helps with the upkeep of all the business’ when she can, while her oldest son, David, manages them and does the lion share off all the work that is needed. John and his brother Dan help with all phases of the family business, too, but their main function is teaching the karate classes.

John started karate when he was 14 years old and received his Black Belt four years later in Shaolin Karate under his brother, Dan Wade, who studied under Master Bob Green and Grand Master Sin The. But, in 1987, while John was training for his Black Belt test, he was diagnosed with Chronic Kidney Failure. John didn’t just choose to flagrantly ignore the advice of his doctors, but having his doctors tell him he was going to die made him angry, and so John’s innate competitive nature chose not to do dialysis, with the thought that he and God would fight this alone. And for 18 years John struggled through terribly sick and non-productive days. But, in a way, he felt as though his struggle drew him closer to God and vowed that he would not give up. But one day in 2006 God sent John a stronger message.

I think I knew the message God was sending when I heard John describe his experience. I was reminded of the story of that man, who oddly enough could have been John. The story goes that ‘John’ was on the roof of his house during a flood. And as the waters continued to rise, someone came by in a raft and said, “Quick, jump in I’ll save you.”

The water rose above his waist and a larger boat came and someone yelled, “Jump in, we’ll save you.” 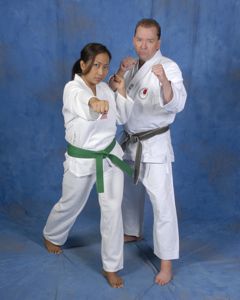 The waters were now just below his chin when a helicopter came along and lowered a rope and yelled, “Grab a hold of the line and we’ll save you.”

And again John answered, “No… I trust in God, he will save me.”

The water rose over John’s head and John drowned. When John was in front of God he asked, “I’ve been a faithful servant, why did you let me drown when I trusted you to save me.”

God shrugged and raised his hands, palm up and said, “John, what can I do? I sent you a raft, a boat… even a helicopter.”

Believing and trusting God is great. But it can’t do much if you don’t have a close enough relationship with God to recognize his favor when it’s given to you. John’s anger kept him from that closeness and, despite what he thought, John ended up battling this disease on his own. Because of John’s anger at his doctor he went against his doctor’s advice and refused to do the dialysis and on June 6, 2006 he passed out with ESRD (end-stage renal disease). He then went on four hour dialysis treatments three times a week for a period of 19 months, after which, he received a kidney transplant. His body tried to reject the kidney twice since then, but now seems to have accepted it’s new home. John is back to teaching karate, but he will need to take his medicine, exactly on time, five times a day for the rest of his life.

I don’t know how close John is to finding the message God is trying to give him. It’s easy to see John knows how important God is to him, but now I believe John is starting to learn how important he is to God. I feel certain John Wade has gone through this life with so much pain because God is preparing to use John’s life in a powerful way.

And it may have started with Liz, his wife of three years. Because, with John’s help Liz needs only to pass the board exams to become a doctor, which she will be doing shortly.

Together, they are going to do great things for the Lord.

Put Off Thy Shoes…