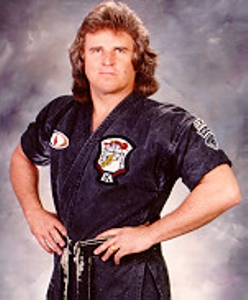 The American Kenpo of Grandmaster Steve Spry is a combination of several Hawaiian and Polynesian martial arts that he studied and learned from their Masters.

Grandmaster Spry has enlightened, motivated and inspired thousands of people throughout the world with his knowledge and wisdom. By listening to Grandmaster Spry’s message, you will learn what a Champion is. It is well documented with Grandmaster Spry having over 300 International Karate Victories from students he has trained, that “one does not become a champion until one has realized that they are a Champion!”

Grandmaster Spry has been the recipient of numerous Honors, Awards and Titles, one being “The Master of his Craft.” Thromgh his mastery and understanding from God that his gifts are greater than his talents. Grandmaster Spry is committed to sharing his:

Knowledge from Man… Wisdom from God