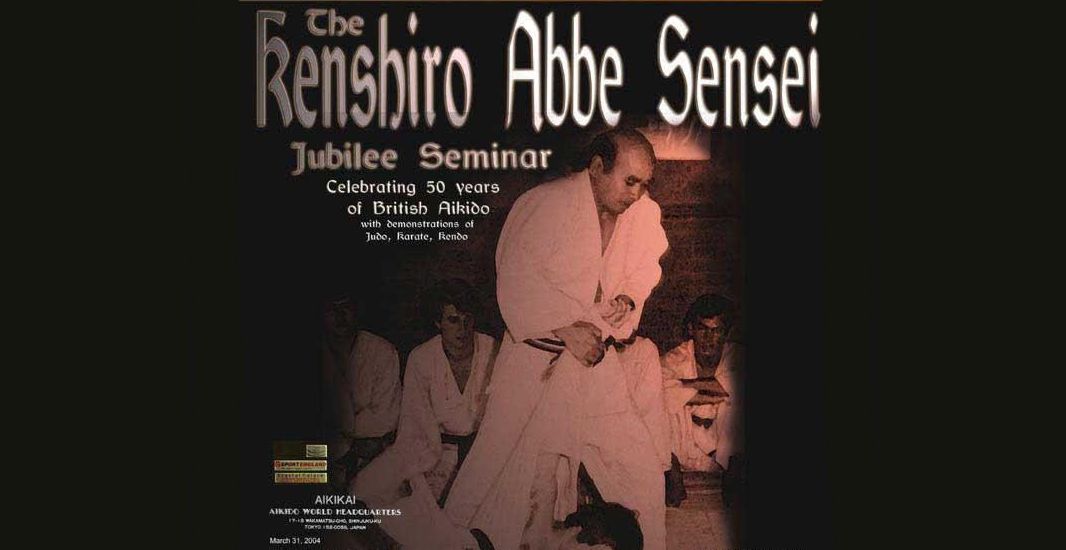 Henry Ellis, a direct student of the legendary Budo master Kenshiro Abbe Sense, from 1957 describes the event at the Crystal Palace Sports Centre, London, to celebrate this great teacher and his arrival to Great Britain in 1955 and the subsequent inception of Aikido.

Kenshiro Abbe Sensei
In February 2004 Derek Eastman and I were invited as guests at the annual dinner of The Bushido Za Zen International Society by its Chairman Mr Arnold Davies Hanshi an old student of Kenshiro Abbe Sensei and a close friend of my own good friend Bill Woods Sensei. These names alone meant that this evening was to be something special with so much history and martial arts background between us.

As we arrived we were met by Mr Clive MacDonald, a member of the Bushido ZaZen. Mr MacDonald and Mr Davies had been instrumental in putting together many of the facts to help with the protection of the true history of British Aikido during the great British Aikido Board Controversy.

Memories of Kenshiro Abbe Sensei
Mr MacDonald immediately brought several pints of beer to our table and from then on the conversation flowed along with the beer. As we spoke of our memories of the legendary master, Kenshiro Abbe Sensei, I said “ Do you realize that it is 50 years next year since Abbe Sensei arrived in Britain ! “. We all discussed the importance of this date, I then suggested that, as we all belonged to the Essex Aikido Forum ( EAF ), which is a group of like minded people interested only in Aikido without its politics, we agreed that we should organise a celebration of such an important date. Mr MacDonald called over Mr Davies who, without a moments hesitation, gave the event his full support and financial backing.

The Organizing Committee
Before the evening was over we realised that this event would be bigger than anything ever previously organised by the EAF or any other Aikido organisation for that matter. We decided there and then that we would need a working committee if we were to put this very special event together. Mr MacDonald approached two other senior EAF member, Mr Mike Leavy and Mr Eric Gillett, who agreed to join our organising committee. I then approached Mr David Humm the administrator of the very popular website the “ National Aikido Communication DataBase “ . Mr Humm had also been involved in our efforts to protect the history of British Aikido. He also became a willing committee member. Mr Rob Peck agreed to be the secretary We now had a full committee of seven members who were now totally committed and dedicated to putting together the greatest Aikido seminar ever in the United Kingdom. I don’t believe that any one of us on this night were able to grasp the enormity of the task we had pledged to undertake.

The Venue
As the word spread throughout the Aikido and MartialArts communities and, from the interest that was now being generated, we now knew that we would need a prestigious venue After much deliberation and following a visit to Crystal Palace Sports Centre, we soon realised that this was to be the final venue. This was to be a wise decision as, with its great hall and facilities along with the accommodation blocks and restaurants, It would later prove to be capable of hosting the planned event comfortably. The event attracted 430 students. 60 guests, 370 spectators and visitors totalling almost one thousand people on the day With students from all over the UK – USA – France – Holland – Germany, Czechoslvakia.

The Teachers of the Day
As this day was to celebrate the arrival in the UK of Kenshiro Abbe Sensei in 1955, and the subsequent inception of Aikido. It was decided to invite the five surviving direct students of Abbe Sensei from the 1950’s/60’s mentioned below.

I, Henry Ellis and Derek Eastman had already agreed, now I had to approach my old friends, Sensei Ralph Reynolds and Sensei Hayden Foster, who willingly offered their support.

Sensei Ken Williams, first student of Abbe Sensei, was also approached. He had to decline due to prior commitments. He did however provided a letter of dedication to be read out at the event. I then approached Sensei Bill Smith Shihan MBE, who sadly had to decline due to health issues. His son Phillip attended to represent his father and the AikiKai. Now we had a full Aikido teaching team. The event was officially under-way. We also received a letter of tribute to the memory of Abbe Sensei from the Doshu Moriteru Ueshiba ..

The Guests
The guest list was a who’s who of the Martial-Arts world in the UK. There were 60 guests and, with respect, I am unable to mention them all but, the following will give some insight.

The Budo Demonstrations
During the mid day part of the event there was a break for the students while the Budo demonstrations were carried out by some of the very best exponents of the various arts on display. This was a unique event where students were now able to witness many of the Budo arts that they had never seen before.

The Event and The Day
This was a very wonderful and special day for me after almost 50 years of practicing Aikido. On the morning of the event as I entered the great hall at Crystal Palace Sports Centre to the electrifying sound of the Taiko Drummers and masses of students around the mat area plus many more queuing at the door to register. I walked onto the concourse floor to see all the various stalls set out. Mr Don Baney a specialist in Japanese works of art had a fine display of Samurai armour and swords, for more information visit: The atmosphere was fantastic, an indication of the great day ahead. I met so many people that I had not seen for so many years.

There was a raffle at the end of the day with a prized valuable ShinKen sword, presented by Nine Circles Budo Equipment Supplies. A hand made Tanto presented by Sensei Dave Rogers of New Mexic,o USA. Other prizes included the book “ Positive Aikido”, Gi’s, bokkens, shinai’s and many commemorative T-Shirts.

This was indeed a very special day.

I was privileged to be at the great event in 1963 held by Abbe Sensei at the Royal Albert Hall in London where I was assistant to Mikoto Nakazono Sensei. I never thought that I would ever see another event to equal that one. On this day of celebration and commemoration of the life of Abbe Sensei, I believe I saw the event to eclipse all others.