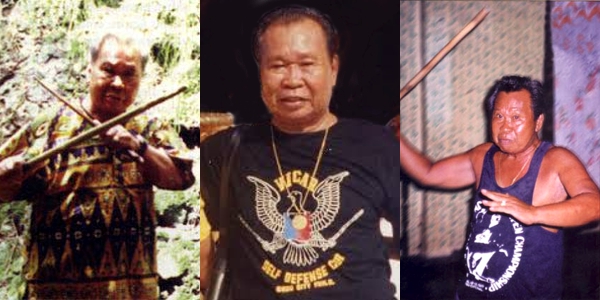 Vicente Carin was born in Dalaguete, which is in Cebu, and its approximately 40 miles away from Cebu City.

At the time of his birth there was a mix up with dates and times of the birth, so through out his life he always had to celebrate two birthdays, one for the date told to him by his mother, and the other was the date that was eventually put on the birth certificate documents, but no-one knew which date was the correct one.

When Vicente Carin was very young, his father Gorio persuaded his wife Merta to leave their dwellings an to go live in Cebu City where he had found a new job.

But Merta did not like the idea because she was happy with the resources that they had, and to her it was sufficient enough for their family to live with.

Her decision was supported by her brothers, but this made Gorio very mad, so he decided to burn their house down, then he fled there from Dalaguete with his son young Vicente ‘Inting’ Carin on his shoulders.

Gorio was later targeted by his inlaws, and they chased him with hand made guns, and blow darts, so when they caught up with him eventually, he was imprisoned for burning down the house, and for trying to kidnap his son Vicente.

Later on his family did decide to transfer to Cebu City, because there was more opportunity for work there.

In his early teens Vicente Carin witnessed his elder brother Cipriano get fatally shot and murdered, then his body was thrown in the mud and was covered up just like a pig, this act was carried out by a very nasty and cruel Police Officer from Dalaguete.

Even at a young age, Vicente Carin vowed revenge for his brother’s death, and he knew that eventually he wold kill the man who murdered his brother.

As young man, Vicente Carin became an amateur boxer, and he earned himself quite a reputation as a very tough opponent, especially after having some very hard fights.

He also worked as a counter salesman in a Japanese owned store before the war.

As a child he studied to a good level of education, actually this was almost an equivalent level to the school teachers there in the Philippines, because he was very bright and articulate, and especially with the English language.

When World War 2 broke out, the young man Vicente Carin signed up as a soldier, and he was then inducted as regular member of the Philippine Guerilla Platoon.

He was very active as a Geurilla fighter in the mountains around Cebu, and he fought against the Japanese.

After the war he was honorably discharged as a soldier, so he sought refuge back in Dalaguete where he was born, but when he arrived there he got a real surprise when he found out that most of his the senior family relatives had commenced the practice of Eskrima, and they trained with great pride and honor.

He learned his eskrima skills from the leader of the group, this was his Uncle Ponsing Ybanez, and everyone knew that Ponsing Ybanez was a great stickfighter, and he became Vicent Carin’s teacher, hero and idol.

There was a time when a family fued erupted into full blown mayhem between his eskrimador relatives and a group of stone throwing distant relatives.

Even Vicente Carin’s old father Gorio got involved in that battle, and he protected any of his fallen relatives by screaming at the oncoming distant relatives who were coming to kill the fallen family member.

Gorio Carin chased people away with his knife, and at times he would even pick up a stone and throw it back at the angry group of distant relatives. (The old man saved the fallen ones from a certain death!)

Old man Gorio was not fully convince that eskrima was effective enough in a dangerous fight, so he preferred to use a bladed weapon instead.

When Vicente Carin had learned enough of the Filipino Stickfighting from his Uncle Ponsing Ybanez, he had to fight a ‘Juego Todo’ stickfight with his teacher just to see if he was worthy enough to be a real stickfighter.

It was here that Vicente Carin earned his reputation as a champion stickfighter, because he was too tough for his Uncle Ponsing Ybanez, because he fought him so hard that eventually Ponsing Ybanez surrendered.

At the height of Vicente Carins popularity as a ‘Juego Todo’ stickfighter, he sought the where abouts of his brother’s killer, because he wanted to avenge his brother’s death.

That brutal Policeman heard that Vicente Carin was looking for him so as to to avenge his brother’s murder, so the Policeman got so scared that together with his family they all left to go live in Mindanao.

After the war Vicente carin polished and upgraded his eskrima skills to a very effective and combative level, and he taught his family members his own style of Eskrima.

Vicente Carin later joined the very famous Doce Pares Eskrima Organisation, so he became the student of Grand Master Momoy Canete, and he was taught the Espada y Daga techniques from this great teacher.

Vicente Carin was later ranked as a ‘Grand Master’ in the Doce Pares Eskrima system, and he would do a lot of sparring with the club’s ‘Juego Todo’ champion, the very famous Cacoy Canete!

Eventually GM Vicente Carin branched out and created his own style of ‘Dalaguete Doce Pares Eskrima’, and now his sons teach the style of their father, and they continue his legacy.

The Doce Pares Eskrima Organisation is respected as the leader and front runner of Eskrima in Cebu City of the Philippines, ever since it was formulated in 1932.

Doce Pares Eskrima Stickfighters are known as real stickfighting warriors in the Philippines.