On November 13, 2007 at my school in Solingen, Germany I decided to adopt the same training safety standards for my civilian students that were common place for police defensive tactics and military combatives training in North America at the time. As such, I had set a new standard for civilian self-defense training worldwide.

When my 22 students showed up on that cold winter day on Schuetzenstrasse 30 my Reality-Based Personal Protection Director of German speaking countries, Tobias Leckebusch, and I had a numbered bag of Reality-Based Safety Equipment waiting for each of them. After carefully inspecting the contents of their own bag they signed for the equipment: 1 hard shell helmet, 1 pair of knee pads, 1 pair of elbow pads, 1 mouthpiece, 1 wrap-around eye protection, 1 pair of boxing gloves, and 1 chest protection for each female in the course. 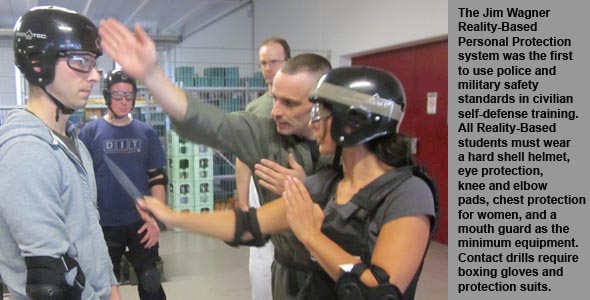 Going to this new standard did not happen over night. Back in 1992 when I first started teaching police defensive tactics and military combatives there were no standard safety protocols. I, along with other instructors in North America and Europe, were true pioneers. We were combining various martial arts techniques with tactics, and protecting our students with whatever we could find off the shelf at the time: hockey helmets and gloves, martial arts padding, baseball shin guards, motocross vests, and various military equipment. Of course, it depended on the level of training we were trying to accomplish and the scenarios required.

By the mid 1990s all kinds of protective suits became the norm in police and military training circles. These were suits developed by various companies that attempted to give complete protection for the participant, from head-to-toe, for combatives training. Some gave better protection than others. Of course, if suits were rated to take impact weapon blows, such as baton strikes, they tended to be much more bulky and harder to fight in. Likewise, some suits were designed to absorb Simunition FX ballistic rounds (paint marking bullets), but were not very good in dissipating hand and leg strikes. None the less, the standards for wearing protective gear in defensive tactics training were pretty well established by the year 2000. 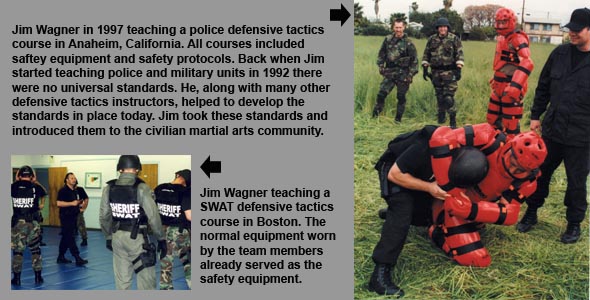 By 2007 most major law enforcement agencies and military units took great care to outfit their defensive tactics and combatives students with head-to-toe protective gear, restrict any real weapon carry on their persons, prohibit full force contact, and maintain realistic objectives for scenarios. Yet, by 2007 very few civilian martial arts schools even knew of such safety protocols, let alone apply them. Yes, there were martial arts schools wearing padding on their bodies during contact sparring and other schools doing realistic scenarios to become a little more “reality-based,” but there was not a true marriage of the two.

After working with Garth Hoffman, one of the top police defensive tactics instructors in British Columbia, Canada and going over some case studies of people injured in training, I finally decided that I would implement the strict standards we both enforced professionally and transfer it to my civilian-based seminars starting with a Vancouver course back in July of 2007. Garth and I, along with Reality-Based Personal Protection Canadian Director Dallas Johnson, provided 75% of the recommended equipment. Of course, my Reality-Based courses were, and still are, a mix of empty hand training, knife and impact weapons training, and lots of shooting scenarios with air guns that fire a 6mm plastic projectile.

Even today I am absolutely shocked at how many civilian martial arts schools train with wood, plastic, and rubber knives without any eye protection on whatsoever. Even though these training tools are non-lethal a good blow to the eye with one of these tools can cause permanent eye damage. My students can’t even hold a training knife until they have proper eye protection on.

Helmets are essential because most Reality-Based training is done on concrete floors, and scenarios are done in realistic environments; even sometimes in the back alley of the school. Although “contact” is never full-contact, it does not take much for someone to slip or fall and hit their head against a wall or the ground. A helmet protects the student from head injuries. Likewise, if someone is taken down or falls accidentally during a scenario a good plastic shell elbow or knee pad prevents bone chipping or swollen knobs. Yes, I am a firm believer in using mats, but only when first learning a technique, but after that students must develop their skills on a real surface. This is why body worn safety equipment is so necessary.

For training requiring air guns, such as robbery or terrorism scenarios, I will have the “victim” put on a full face mask; especially women who do not want to go to work the next day with a bruise on their face. Full face also means protection of the front portion of the neck. Some training, such as cover and concealment drills or quick peek movement definitely requires a mask since the head is often time the target of the gunman.

Once in a while one of my “macho” students will complain about the safety equipment being uncomfortable or not fully “reality-based.” I respond by saying, “Do you want ‘real’ injuries or ‘real’ death?” In my opinion an instructor has failed if one of his students gets hurt. Of course, some injuries are unavoidable, such as a small cut or a twisted ankle, but serious injuries can be avoided. Even then a first aid kit must be on hand. The goal is to come close to reality, not make it reality. Safety equipment helps students avoid injuries, and thus allows them to continue to train. There is nothing worse than getting an injury and not being able to train for a few months because of it.

These safety protocols should be yours also.