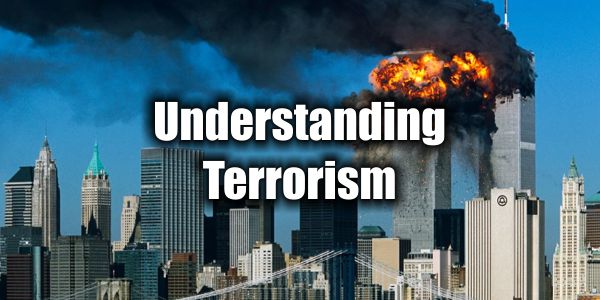 The purpose of the Understanding Terrorism is to help us learn as much as possible about Terrorism. If you have Terrorism information to share, please feel free to contact us.

Terrorism is the uncontrolled enemy of all and must be fought by all nations together. It is anti-terrorism, through the use of education, that will bring defeat to terrorist. We must not allow any countrymen to teach children that terrorism is patriotic or “a religious right” and a justified means to an end. Instead the world must stand together, with one loud voice, and say enough is enough, terrorism is never justified, never!

“Such criminal terror acts prove that no measure is enough to fight terrorism. Actions that governments take to fight terrorism are totally justified because protecting life is a lot more important than protecting civil liberties. What hurts me the most is that there are people in our Arab world that continue to sympathize with terrorism . . . this is our sick reality and it doesn’t help to pretend this mentality doesn’t exist. One can’t ignore the fact that Arab governments didn’t act early on to crush the extreme movements growing in our midst . . . Arabs and Muslims should stand together behind the U.S. against terror.”
Jihad Al-Khazan, Al-Hayat Newspaper as reported by Octavia E. Nasr, Senior Editor for Arab Affairs, CNN

At All About Martial Arts, we are all against terrorism in any form, against any one, anywhere, for any reason. It is our goal to disseminate information which may save a life or many lives.

WARNING: The information contained in Understanding Terrorism may be very graphic and sometimes the language can be offensive. Parents please supervise your children in this section!

The US National Counterterrorism Center

CAMERA Committee for Accuracy in Middle East Reporting in America

IntelCenter: counterterrorism intelligence when, where and how you need it

Law Enforcement Guide To Terror Groups and Their Known Emblems

This is list of World Wide Terrorist Groups. Terrorism is in the news daily. It is important that we are all on watch for unusual events or things out of the ordinary that might be a tell of a terrorist threat.

Al-Qa’ida in the Islamic Maghreb

Popular Front for the Liberation of Palestine (PFLP)

USAdojo - November 12, 2001
We use cookies to ensure that we give you the best experience on our website. If you continue to use this site we will assume that you are happy with it.OkRead more