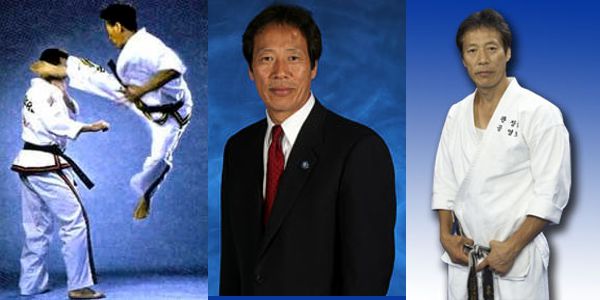 The phrase, “faster than a speeding bullet…”is used to describe a Superhero from the planet Krypton, it can also be used to describe a Korean from Pittsburgh. Tae Kwon Do Master Young Bo Kong may not be Superman, but he has been dubbed the fastest kicker in the world giving him and the man of steel something in common.

Master Kong’s blinding speed is a matter of record.  For decades he has amazed spectators, students and competitors alike with his lightening fast kicks.  In the process of earning a reputation inside the ring and out, Master Kong with his brothers Grand Master Kong Young 11 and Master Young Joon Kong ran and operated one of the most successful chain of Tae Kwon Do studios in the country. With more than 45 schools nationwide the Kong brothers were among the pioneers of Tae Kwon Do in America.

In August I spent a week with Master Kong at his Pittsburgh school and was fortunate enough to witness in person what I’d only heard about from others. At 47 the Korean martial arts master still moves so fast that his techniques are almost a blur to the naked eye.

To give you an idea of just how fast Master Kong’s kicks are, I tried taking a photograph of him in action but his kick had already landed by the time my shutter had released. In order to capture him on film I asked Master Kong to execute his kick on the count of three, then when I reached the count of two I pressed my shutter. I had to be one full count ahead of his kick to get it on film.  That’s what I call fast.

Master Kong says that there is no secret behind his blinding speed.  It all boils down to hard work and lots of practice.

“There is no secret to developing a fast kick,” explained Master Kong. “I trained very hard, often doing up to four thousand kicks a day.  So if you want to kick fast you must practice often.”

Master Kong went on to say that between the ages of 18 to 22 he would train six to seven hours a day to perfect his Tae Kwon Do skills.  All of that hard work paid off when the young Korean won the middleweight Grand Championships at the Pan American Games in 1973.

“I have been told that my kicks were so fast that they were just like a blur going by,” recalled Master Kong. “Back then my kicks were two, sometimes three times faster than my opponents kicks. This allowed me to score quickly, often times while his move was still in mid air. My favorite technique in tournaments was a back kick against a roundhouse kick. When someone would throw a roundhouse at me I would time it perfectly and spin outside of the attack and counter it with a back kick. Many times I would kick my opponent with such force that they would fly several feet backwards.”

Unlike many Korean fighters of the era who competed mostly in Tae Kwon Do sanctioned events, Master Kong fought in more than 200 open style tournaments, pitting his skills against all styles and systems.

“In 1974 I won Grand Champion in Canada and later that year I won the another world title in the middle weight division at the North American Championships. In the final round I kick the guy so hard that he flew ten feet, over the top rope and landed outside of the ring.”

In addition to getting to the target in the blinking of an eye, Master Kong’s kicks are powerful. His techniques are a truly awesome combination of speed and power and according to him a kick without power is nothing more than a push and will have little affect on your opponent.

“Many people who kick the bag merely get it to swing high into the air,” said Master Kong.  “There is no power there. It is merely a lot of pushing. When you have a fast snap and the bag does not move, but rather it bends or caves in, then you have power. If you just push an attacker you cannot deliver a crucial injury to their body, but when you snap a kick so hard and with such speed that it lands properly,  then it will break right through their bones. So when I practiced my goal was to kick so fast and so hard that the bag would not swing, but it would cave in.  That’s how I developed both speed and power.”

Master Kong also emphasized that all power comes from the hips, so you must develop a fast hip action.

“Rotating the hips is very important,” Master Kong said while demonstrated a shuffling maneuver.  “There is no other way to get power than through the hips, so you must practice rotating the hips with your kicks.  You must do this thousands of times a day.”

The power of Tae Kwon Do is demonstrated through the art of breaking, according to Master Kong the smashing of bricks and boards is the only way of testing the measure of your power and speed short of deadly combat.

“The reason we break in Tae Kwon Do is to test the power of our technique,” explains Master Kong. “To unleash such a blow on the human body would surely result in that persons death or serious injury so we use boards instead of bodies.”

On more than one occasion Grand Master Kong has demonstrated the lethal power of his kicks by leaping high into the air smashing row after row of thick pine in the process.  However he claims that the most difficult break is when several boards are being hand-held. 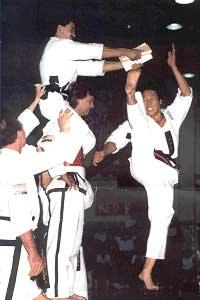 “Many masters can break large stacks of boards and bricks when they are supported by a brace or being held by a large number of people, “ says Master Kong.  “But I don’t know of many who can break eight one-inch boards that are being hand held by two people. The boards are so thick that there is no way for the average person to get a good grip on them. Subsequently the boards are basically dangling mid-air.  If they aren’t hit with speed, which generates power, they will merely fly unbroken from the holder’s hands. But if you kick very fast, with a strong snap and focus the boards will break in half, just like the heavy bag will cave in when kicked properly.

Recently at a large ceremony honoring Chuck Norris, Bob Chaney, and Bob Wall, Master Kong was asked to perform his famous break. To honor his guests he agreed, and while still wearing his suit Master Kong came onto the floor executed a jump spinning back kick breaking all eight of the hand held boards in a flawless execution of the Power of Tae Kwon-Do.

Like many Tae Kwon Do stylists Master Kong depended on his kicking skills to put him in the winner’s circle during his days as a competitor. Eventually the world champion realized that he was neglecting a very important weapon, his hands.

“In the early 70’s my hands were just like any other Korean fighters hands,” said Master Kong.  “I did not have very good punching skills, but later on I realized that my hands were just as important as my feet so I looked for ways to improve my hand skills.”

To accomplish this while in Korea, Master Kong began training with a kickboxer. “He taught me how to box and how to use my hands very effectively,” said Master Kong.  “Then my older brother also worked with me. He was excellent with his hands and one of the first Koreans to emphasize western punching techniques in addition to our Korean art form.”

The result of this cross training in kickboxing and boxing was a Tae Kwon Do fighter who had exceptional power and speed with both his hands and his feet.

“Eventually I started using my hands as much as my legs,” said Master Kong. “As I’ve gotten older my hands have become a very important weapon for me, in fact, today I use my hands about 60 percent and my legs 40 percent of the time. I punch like a boxer, using a straight jab and uppercuts. My hands can set up a leg attack, and my legs can set up my hands.  For example if I upper cut to the ribs and they drop their guard to block I can then kick them in the head and if I fake a kick they go to block it, that opens them up for a hand attack to the face or body.”

In a real fight Master Kong will also employ kickboxing techniques, attacking the leg and groin.

“In a real fight you use whatever works,” said Master Kong.  “I like a low kick in a situation like that, especially if the attacker has a knife.  When a person’s life is on the line you must draw upon all of your martial arts skills in order to survive.  It doesn’t matter if it’s Tae Kwon Do, Judo, Karate or Kickboxing if it works in the street, use it.”