After I had run each person through a scenario as a witness I explained to my students huddled in a semi-circle around me, “Your phone is your best weapon.”

Across the street, from a safe distance, Peter and Stephan could see and hear the gunman threatening his victim, “Give me the money now!” The petrified victim was too slow and got pistol whipped on the right side of his face and crumpled before the feet of the robber.

I got behind my two students and yelled, “What are you two doing?” Both of them looked at me puzzled and Stephan asked, “What can we do? He’ll shoot us if he help.”

Stephan was right. Interfering with the crime in progress would only get them hurt or killed. Yet, because it was a self-defense course they thought that I was encouraging them to go intervene in the incident and use some of their combative skills that I taught them in previous classes.

I barked out the orders, “Peter, call the police now and tell them that there is an armed robbery in progress, the location of the crime, and the description of the suspect. Stephan, I want you to start videotaping the crime with your phone now, but don’t let the bad guy see you doing it.”

Both of them felt a little embarrassed at first for not thinking of it themselves, but my “jump start command” quickly prompted them into taking proper action.

After I had run each person through a scenario as a witness I explained to my students huddled in a semi-circle around me, “Your phone is your best weapon.” Well, to be honest, since it was at my school in Solingen, Germany I actually said, “Your handy is your best weapon.” The Germans call their cell phone a “handy,” while my British students across the pond call it a “mobile.” Regardless of what you call the device it is a powerful weapon indeed.

Ever since I first introduced the Jim Wagner Reality-Based Personal Protection system to civilians in 2003, for twelve years before that I only taught police and military personnel, I have always included personal mobile phones as a weapon to fight crime and terrorism. In my popular Knife Survival course my students experience first-hand a criminal knife attack. The fight only lasts a mere few seconds and the criminal runs off. I demand and answer from my students, “You have just been in a knife fight. The criminal has fled and you are now in a safe zone. What are you going to do now?”

The traditional-based and sport-based students are not used to post-conflict scenarios, but they quickly figure out the answers I am fishing for. I want to hear, “We check ourselves for injuries,” and “We call the police,” and in that order. I give my students a demonstration in how to do a systematic self-triage from head to toe. This is a subject that I cover in detail in another article, in some of my books and DVDs. Then after the self-triage is complete I actually want to see my students dialing the police, simulated of course, and talking out loud so I can hear what they are saying. In some of my courses, like Women’s Survival, I actually have them dial on a mobile phone prop. I force all of my students to get into the habit of calling the police immediately after a conflict when they can safely do so. 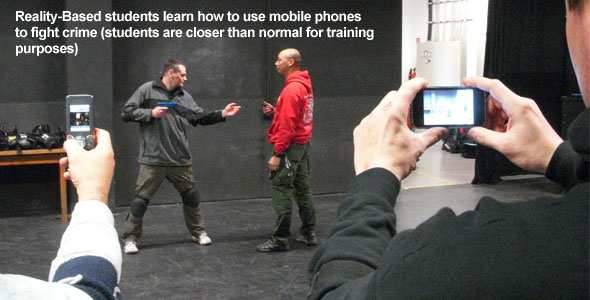 In real fights involving criminals or terrorists people usually get hurt. You can get hurt. By conditioning yourself in training to get on the phone immediately after a fight you reduce the response time of medical aid. The sooner the ambulance gets to you, or someone you are helping, the sooner you go to the hospital. With some injuries every second counts. Part of good self-defense training is good post-conflict self-defense training.

As a police officer for over two decades now I know the importance of getting information out to the police when a crime is still “fresh.” In many cases, the sooner the victim reports the crime the more likely of apprehending the suspect during his getaway. The most important information a police dispatcher needs immediately is:

When you call the police for an emergency you will be talking to one person. However, behind the scenes that you don’t see is another dispatcher notifying the proper First Responders (police, fire, medical). Even police officers that may not be assigned the call will be keeping their eyes open for anyone matching the description of the suspect as they handle their own calls. If the criminal was seen fleeing the scene of the crime in a vehicle there will even be police cars positioned at key locations along possible escape routes, which the police are very familiar with based on previous crimes. Your phone is the key to getting out vital life-saving or criminal apprehending information.

When the police officers show up at the crime scene they will request more details concerning the crime. What they will ask you can all be found on my Crime Survival Incident Recollection Card.

The All Seeing Eye

Many criminals have been prosecuted and punished simply because a good citizen videotaped a crime in progress with their mobile phone. Sometimes a video file is the best evidence that the police have in identifying the wrong doer. Even crimes against humanity, like the Iranian Election Protests of 2009-2010 and the Syrian Reform Demonstration Massacres of 2011, showed the entire world what was going on that what was going on simply because a few quick thinking individuals pulled out their phones and started recording what they were witnessing. This led to intense political pressure on those countries abusing their authority. In democratic countries abuses of power caught by a phone camera can bring down police chiefs and politicians.

Since the beginning of 2010 I have been having my students in my Situational Awareness course, formerly called Scenario Training, videotape simulated crimes and acts of terrorism.

Obviously if you are in the kill zone (the area where you are in immediately danger and must defend yourself or escape) at the time of an incident you will not have the time or foresight to whip out your phone and start videotaping the event. On the other hand, if you are outside of the kill zone, and in what we in the military call the “warm zone,” you may have the opportunity to send the video file to the police or the news media of your choice. If you have the proper system and application, and a good wi-fi connection, you may even have the opportunity to send the images live to a party on the other end of the line. In a tactical situation a live feed could prove to be valuable intelligence for the authorities.

On many American SWAT teams and even military Special Operations teams the operators are equipped with helmet video cameras. When the United States Navy SEALs raided infamous terrorist Osama Bin Laden’s fortified home on May 2, 2011 in Abbottabad, Pakistan and fatally shot him in the head, the operators were wearing helmet cams. Even many extreme sports enthusiasts, such as mountain bikers, skateboarders, snowboarders, parachutists, and the like are using inexpensive video cameras mounted on their helmets. There are even “spy” video cameras concealed in sunglasses and writing pens readily available on the market. If you happen to have such a device just prior to an attack, and with good observational skills and a high sense of situational awareness, you just may see the precursors to an attack and turn on the video camera just before the incident unfolds.

Although it sounds like simple advice that I am giving you, that is to take out your mobile phone and report a crime or videotape a crime in progress or an act of terrorism, it probably won’t come to mind if you don’t actively make it a part of your self-defense training. Or, if you do finally think of it, it may be too late. Like any technique you want to commit to muscle memory you need lots of repetition.