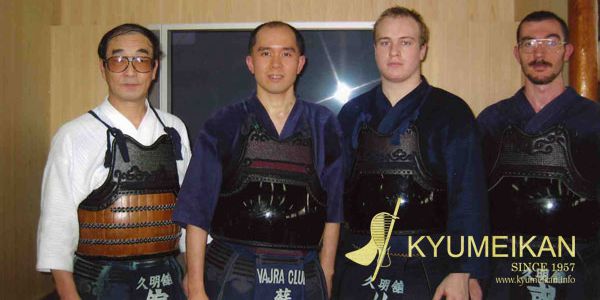 In 1957, my father Kahei Kubo began Kyumeikan Dojo. In the post-war years, the practice of kendo and other martial arts was forbidden, yet we gradually became able to practice again. In those times, the Japanese people were poor and had little hope for the future.

People turned to many bad habits and the crime rate increased drastically. My father wanted to use kendo as a means of instilling and maintaining traditional Japanese values in a rapidly changing world. He decided to begin Kyumeikan Dojo with this purpose despite a lack of support from his friends and senseis. But his determination was strong; he was able to borrow much money and build this dojo.

At that time, I was only fourteen years old and a second-year student in middle school. There are many things I do not remember well. Later, while I was in America, my father passed away suddenly and I was unable to receive a history of the dojo from him. Fortunately, I was able to receive his kendo philosophy afterward.

After graduating from Sugamo High School, I went to Australia for a year. I then began to study at Nihon Daigaku but decided to quit. I still wanted to travel abroad, so I traveler to America, where I lived for seven years. I had just received my green card and had been drafted to go to Vietnam for the United States but had to give it all up and return to Japan when I heard the news of my father’s sudden death.

As the oldest of three sons, I was designated to succeed my father. I became the youngest kancho in Japan. In another one and a half years, my mother died. I was alone with no information about how to run a dojo or how to teach, but I persisted. Time passed quickly; now the dojo is celebrating its 40th Anniversary. For the past 27 years, I have struggled. I had to learn by myself how to deal with children, parents, adults. It was my responsibility to learn these things, but I was very emotional, always wondering what I should do, how I should teach. In the dojo we must teach spirit in addition to technique. We must give students more than kendo for their individual lives. But while we must give them more than the mere techniques of kendo, we must base everything in the practice of kendo. All of this took much time and effort to learn. When I look back, I still wonder whether I have done enough, and what more must be done for the future.

My departure from America was quite unexpected and I had no time for preparation. Upon my return to Japan to take my father’s place,

I was invited to meet Mr. Kimura, the president of the AJKF. He and Mr. Ishida, Supreme Court Justice, both gave me much encouragement and support. At that time, Kyumeikan was the only dojo in Itabashi-Ku (now there are 30). Kyumeikan hosted many tournaments which were attended by many important people in kendo. At that time there were three 10th Dans in all of Japan, and all three of them came to Kyumeikan, as well as many 9th and 8th Dans. All of these people gave me encouragement and told me that my generation would come. From these people I also learned my father’s kendo philosophy, which has helped me for the past 27 years.

So this year, the fortieth anniversary of Kyumeikan Dojo, I have been thinking about what we have done in terms of kendo practice and society in 40 years? What have we been able to offer to the students who have trained in this dojo? The results of Kyumeikan can be seen in the lives of the 5,000 children who have studied kendo here. Later in their lives, they have spread throughout Tokyo, Japan, and even overseas. Children from Kyumeikan have won the AJKF championship and the AJKDF, but more important is the lingering effect kendo training has had upon their lives. They are carrying important lessons into the world for their entire lives, and here is where the dojo’s history is most alive.

Luckily, Kyumeikan dojo has had many nice people as supporters. They understood me and the dojo and the dojo philosophy well, and all have supported us. Since Showa 45 (1970), Kyumeikan Dojo has had a new motto: “Kendo Internationalization,” a result of my foreign experience. I was greatly impressed by the number of people who helped me as I traveled abroad. Especially since returning to Japan, I have felt grateful to them. I wanted to repay this kindness but can only do so as a dojo owner, so I especially accepted foreign students, a total of more than 3,000 students from 47 countries.

Through the help of many people, many of these foreigners have also been introduced to shodo, sado and other aspects of Japanese culture. After returning to their countries, many of these people continue to practice kendo. Some of them are teaching now and have even established the first dojos in their country. I am very happy about this.

I sincerely believe that we are only a weed in the field – not beautiful like a rose, but one of many small efforts toward global peace and understanding. I have pride and I am sure we can internationally raise the Japanese nation’s position or status. It is very important that this happens not economically, not politically or religiously, but through kendo, which is open to all.

At Kyumeikan we may undergo some suffering. This is difficult, but essential for us. Too much suffering is not good for us, but a moderate amount of suffering strengthens the human spirit. Throughout the world, humans are weak in a variety of ways, but through kendo we can help strengthen ourselves and others and thus contribute to a better world. 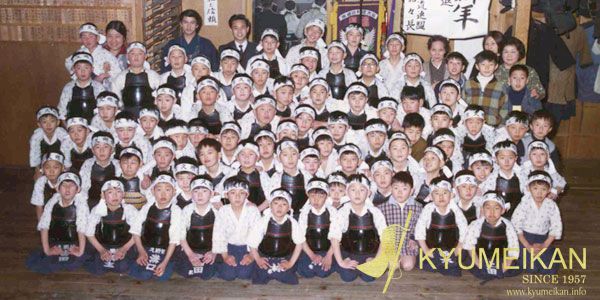 In the childrens’ kendo class, we teach not only technique, but also spirit. Children from Kyumeikan have twice won the All Japan Junior Kendo Tournament and have regularly won at Tokyo and Kanto Area Tournaments. Students from the childrens’ class have twice won the All Japan Childrens’ Speech Contest and have twelve times won similar Tokyo area contests. These speeches were about what children have gained through the practice of kendo. The techniques and spirit of kendo, participation in such tournaments and contests, and the encouragement of general studies (exposure to music, sumo, travel abroad and so on) have all enriched the lives of the children who have practiced kendo at Kyumeikan Dojo.

In the adults’ kendo class, we have the motto, “Sando yudansha shugi” or If you join Kyumeikan, you must aim for three dan ranks. After receiving kendo shodan, I encourage students to study iaido. We must learn about the katana and the applications of a real sword – how it is both different from and similar to the bamboo shinai we swing so easily. Because we wear armor, the practice of kendo is comfortable; there is no real danger to us. Thus I also encourage the study of jodo because its one-millimeter distance and precise timing remind us of the seriousness of practice in ancient times. If a person has the time, money and spirit, he/she should practice all three disciplines together. The AJKF gives exams in all three, and students can receive training in all three arts at Kyumeikan Dojo.

These are my father’s words, and have been the backbone of this dojo for 40 years. Everybody has a different way of thinking – we must understand this. Kyumeikan is not a military-style dojo; we must understand this and remember that as a machi (town) dojo, we must recall our differences while training together.

We must also remember these words as we take kendo out to the world. In 27 years, we have organized 52 trips to 30 foreign countries. Some of these trips have been paid for in part by the Japan Foundation Tokyo Metropolitan Peace and Culture Fund. They don’t give much money to small machi dojos like ours, so this is very significant. We began receiving this money only three years ago and have sent delegations to Romania, Israel, China and other countries.

Kyumeikan’s effort to reach out to the world has been aided greatly by Stanya Sramkova, who came to Japan in 1990 as a live-in student at Kyumeikan, where she began to practice kendo, iaido, and jodo. She has always been very keen and serious, and now wants a dojo in the Czech Republic. So Kyumeikan began collecting donations. Now more than 100,000 people from 47 countries have donated. Through her efforts, television and newspaper articles have appeared throughout Japan, Australia, America and Europe. Japanese people living in the United States know Stanya better than those living in Japan. Fund raising efforts have so far yielded more that 22,000,000 yen. In September, 1996, we held the ground-breaking ceremony for the Czech-Japan Budo and Cultural Center in her hometown of Hradec Kralove. Despite all this, we still need another 30,000,000 yen to build lodging, a tea ceremony room, and other facilities.

But Stanya’s is not the only example. Mr. Takashi Shimomura, an OB from the junior class, asked me at age 20 about going abroad to help teach and popularize kendo overseas. He wanted to go to Australia, but I sent him to South Africa, where he stayed for two years and did much to help with the internationalization of kendo.

Kendo seems to be spreading well through the world, but in some ways it is actually dying in Japan. Kendo experienced a tremendous boom from Showa 50-60. Kyumeikan had five dojos with one thousand children as students. But now there is only one dojo and the number of students is like that when my father began. This is very sad.

I don’t want to blame society or this age, but when I look at this society, it seems that Japanese people have no manners, that young people are only seeking simple pleasures. Where did courtesy and manners and purpose go? I want to find out why Japanese people have changed; I want to understand. I regret that my efforts have not been enough. At the time my father began this dojo, there was very little money in Japan. Now there is much money but it seems that we are lacking spiritually, that we have no heart. A dojo has a great responsibility to make change in individuals and in society, and I feel I can recall this in my father’s kendo philosophy.

If we think of the Shu-Ha-Ri model of practice, Shu is the period of beginning where all is kihon and must be absolutely correct. The Ha period is one of exchange and experience, and Ri one of departure. Kyumeikan has been in a 40-year period of Shu. Now, with this experience and tradition, we may be ready to enter the Ha stage. We can fly anywhere, see much, become bigger. But we must always look back to our first spirit: when my father began this dojo, and later, when I succeeded him. My determination and spirit were so fresh at that time. We must remember our beginnings and carry them with us into the future as we and this dojo enter a new stage.