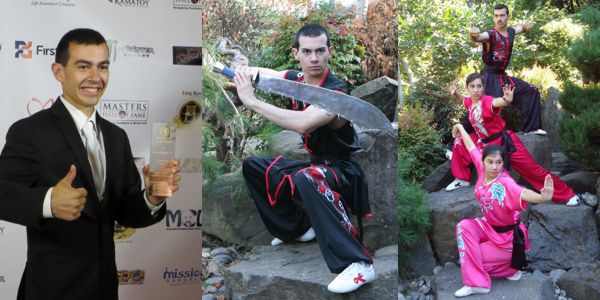 In 2007 Anthony was recognized by Disney Wide World of Sports/Tiger Claw as winning the most gold metals of any Black Belt in the Nation in that year. In 2007 and 2008, Anthony was awarded the “Best of the Best” Martial Arts title from Disney Wide World of Sports and became a Tiger Claw Elite Grand Champion. In 2010, Anthony was inducted into the National Black Belt League Hall of Fame. In that same year, Anthony walked the Hollywood Red Carpet for the premier of the “Karate Kid” movie with Jackie Chan and Jayden Smith.

Anthony’s father had a strong philosophy of always making yourself very well rounded which for the martial arts lead him to train in a number of different martial arts styles. Anthony’s father focused on developing the mind as it was Anthony’s parent’s number one goal to raise good people first and everything else was second. His father taught through example and explanation through many core principles such as honor, respect, integrity, being humble, hard work pays off, you can accomplish anything you put your mind to, and along with always making yourself as well rounded as possible.

With this in mind, at the age of five, Anthony’s father enrolled him and his sisters to study and train in a Traditional Kung Fu school where his father once trained. Anthony and his siblings excelled in their training and with their weekday training at the martial arts school and weekend training at home with his father they entered their first tournament. At this tournament Anthony placed third with his older sister’s winning first and second. Anthony was proud of his accomplishment and with his inner fire ignited; he was determined to continue and seek the best out of himself.

Because of a needed surgery for his sister Jasmine from a childhood burn accident, the sparring of the traditional school needed to be suspended for a while. Instead of stopping their weekday training altogether, Anthony’s father decided to switch schools and put Anthony and his sisters in a contemporary Kung Fu school to learn Wushu and focus on their athletic ability and mastering weapons for awhile. As before, Anthony and his sisters excelled quickly and proved to be worthy of being taught by the head trainers and Shaolin Monks from China.

At the age of eight Anthony developed a severe and uncontrollable twitching of his head. Anthony was taken to a number of hospitals and examined by many specialists who ran many test but none of them were able resolve the issue. Anthony’s parents were told that he might outgrow the uncontrollable twitching in the next decade around age 18, but they should consider the fact that Anthony could probably have this excessive uncontrollable tic the rest of his life. Lucky for Anthony, his father was not welling to give up on him as like the doctors had and decided to take matters into his own hands. Anthony’s father took Anthony deep into meditation and taught Anthony about self-hypnoses and how to meditate and take control of his involuntary twitching using his own mind. Within the first couple of days of deep meditation the uncontrollable twitching had all but disappeared and by the second week was totally gone. Anthony remembers this time and recalls being extremely grateful that his father did not give up on him and through his father’s extensive knowledge, teaching, and belief in God he was cured.

Over the next number of years Anthony and his siblings would have the honor of training under many extremely skilled martial arts masters in many martial arts styles such as Krav Maga, Muy Thai Kick Boxing, Kajukenbo, and Kenpo Karate to name a few.

For tournaments and performances Magallanes Jr. and his siblings have always relied on their father to get them ready. With a core teaching of always becoming as well rounded as possible, Anthony and his siblings were shown how to bring everything they had learn together and always try and show it in a way that nobody has ever seen before. This philosophy yielded Anthony numerous honors, awards, along with 6 National and 6 World Martial Arts Titles.

Outside the Martial Arts

Anthony Magallanes Jr. had the opportunity to explore the acting world under the direction of T.V. and Movie legend James Hong and his daughter April Hong. Anthony has also modeled for martial arts magazines. Other than excelling in martial arts, Anthony’s parents have taught him how to be well rounded in all aspects in life. This lead to his graduation from college with honors in Multimedia with a focus in web design. He explored his field and learned 2D animation, Graphic Design, 3D modeling, photo editing, and video editing and producing. He has explored various other arts such as acting, contemporary dance, wrestling, gymnastics, playing the guitar and piano. Anthony has a zest for life and loves being active.

Thomas Kurz - February 1, 2017
We use cookies to ensure that we give you the best experience on our website. If you continue to use this site we will assume that you are happy with it.OkRead more