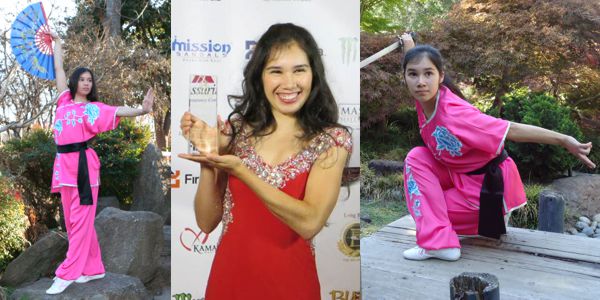 Monique Magallanes was born on April 21, 1992 in Fremont California, which is the same city she resides today. Monique is a 3rd degree black belt in the International Wushu Sanshou Dao Association, World and National Champion Martial Artist, actress, model, stage performer, martial arts instructor, Personal Trainer, and Gymnastics coach. In 2006, Monique was one the original “Best of the Best” Martial Arts Champions from Disney Wide World of Sports, and was on the “Tiger Claw Elite” demo team. In 2012 Monique was honored to perform in front of Bruce Lee’s “Enter the Dragon” living cast (Jim Kelly, Bolo Yeung, Bob Wall, and John Saxon) and Martial Arts Superstars at the All-Pro Tae Kwon Do Hall of Fame Award Ceremony. She was inducted into the National Black Belt League Hall of Fame in 2010. She was also awarded the Leadership Award and inducted into the Master’s Hall of Fame in 2014, and was a VIP guest at the All-Pro Tae Kwon Do Hall of Fame in both 2014 and 2016. Monique was the Co-Captain of the World Champion Martial Arts Competition Team “Team International” and member of the World Champion Martial Arts “Magallanes Family.”

Monique was raised in a loving, fair, and welcoming environment nurtured by her loving parents. Shortly after starting kindergarten, the kids at her school were playing too rough with her, something that she was not used to, which made her scared and cry. This brought great concern to her parents, which led her on her martial arts journey.

Monique’s father had trained in a number of different martial arts styles and taught his children about life through their martial arts experience. Her father worked on developing their minds for it was always her parent’s number one goal and priority to raise good people first and everything else second. Her father taught them through explanation and example, many core principles such as honor, humility, respect and integrity, hard work and dedication. He taught that a person can accomplish anything you put your mind to, and that people should always be as well rounded as possible.

With this in mind, at the age of 9, Monique and her siblings were enrolled in a Traditional Kung Fu school where her father had once trained. Monique and her siblings excelled in their training and with their weekday training at the martial arts school and weekend training at home with her dad, they were ready to enter their first tournament. Monique placed 1st, while her sister placed 2nd, and her brother placed 3rd. Monique’s trophy was taller than her!

Because of a childhood burn accident her sister, Jasmine, required surgery, so the sparring of the traditional school needed to be suspended for a while. Instead of stopping their weekday training all together, Monique’s father decided to switch schools and put Monique and her brother and sister in a contemporary Kung Fu school to learn Wushu and focus on their athletic ability and mastering weapons for awhile. As before, Monique and her siblings excelled quickly and proved to be worthy of being taught by the head trainers and Shaolin monks from China.

Over the next number of years, Monique and her siblings would have the honor of training under many extremely skilled martial arts masters in many martial arts styles such as Krav Maga, Muay Thai Kickboxing, Kajukenbo and Kenpo Karate to name a few.

Before tournaments and performances, Monique and her siblings relied on their father to prepare them for competition. He had always strongly emphasized being as well rounded as possible, and he would help them bring back everything that Monique and her siblings had learned and put it all together in a way that nobody had seen before. This philosophy yielded Monique numerous honors, awards, along with 4 National and 9 World Champion Titles.

Outside the Martial Arts

Monique had the great opportunity to explore the acting world under the direction of T.V. and Movie Legend James Hong and his daughter April Hong. Monique has also modeled for martial arts magazines and was the former modeling face of Lollypopmedia.com. She graduated college with Honors and obtained her degree in Physical Education. She is now perusing her Master’s Degree in Occupational Therapy. She is a Certified Personal Trainer, she has taught and created Group Exercise classes, and is a Gymnastics Coach for High School students. Working through hardship and with her excellent work ethic, she is always seen in a positive light.