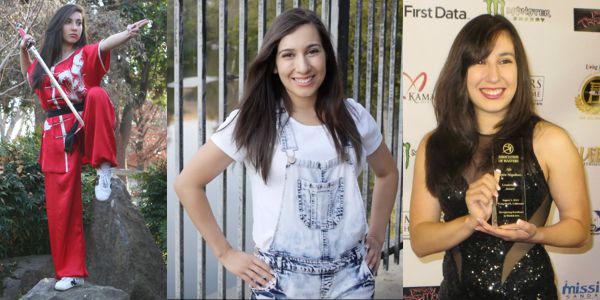 In 2007 and 2008, Jasmine was awarded the “Best of the Best” Martial Arts title from Disney Wide World of Sports and became a Tiger Claw Elite Grand Champion and holds the unique distinction of being the only person to ever win this title in all four possible categories of: Traditional Hands, Traditional Weapons, Contemporary Hands, and Contemporary Weapons.

Jasmine was invited by Jackie Chan and Sony pictures to walk down the Hollywood Red Carpet for the 2010 premier of the “The Karate Kid” movie.

In 2012, Jasmine was honored to perform in front of Bruce Lee’s Enter the Dragon legendary cast (Jim Kelly, Bolo Yeung, Bob Wall, and John Saxon) and Martial Arts Superstars at the All-Pro Tae Kwon Do Hall of Fame Award Ceremony.

In 2014, Jasmine was awarded the Leadership Award and inducted into the Master’s Hall of Fame. That same year, Jasmine was also inducted into the All-Pro Tae Kwon Do Hall of Fame. Jasmine has been honored to be a World Champion “Team International” competition team member, National Champion “Tiger Claw Elite” demo team member and member of the World Champion Martial Arts “Magallanes Family”.

Although Jasmine’s first year of life was somewhat normal by most accounts, she was involved in a burn accident after her first birthday right before Christmas that changed everything. Jasmine received 2nd to 3rd degree burns on her face and hands. Although she narrowly escaped amputation of her hands this was the start of a long journey of hospitals, doctors, and surgeries that would continue for many years to come.

Numerous surgical procedures, limited mobility of her fingers, and looking different from the other children in school introduced Jasmine to a new life of stares, negative comments, and bullying. Although easy for most to become bitter in this type of situation, Jasmine’s beautiful and loving heart did not let her go down that path. Jasmine’s incredible internal fortitude, love for God, and amazing family would prove to be more than enough to overcome this early childhood tragedy.

At the age of four, Jasmine’s father, Anthony Magallanes, began training her along with her old sister Monique and younger brother Anthony Jr. in the martial arts. Initially her mother, Linda Magallanes, did not want her father to teach them martial arts for fear her kids would constantly be fighting but a negative school incident involving her older sister changed everything. Jasmine’s father began training her along with her two siblings in the martial art and the training, philosophy, and journey they would encounter would change Jasmine’s life and her family forever.

Jasmine’s father had trained in a number of different martial arts styles and was decided to teach his kids about life through their martial arts experience. Her father worked on developing their minds for it was always her parents’ number one goal to raise good people first and everything else was second. Her father taught through example and explanation many core principles such as honor, respect, integrity, being humble, hard work pays off, you can accomplish anything you put your mind to, and always make yourself as well rounded as possible.

With this in mind, at the age of seven Jasmine and her siblings were enrolled in a traditional Kung Fu school were her father once trained. Jasmine and her siblings excelled in their training and with their weekday training at the martial arts school and weekend training at home with her father they entered their first tournament. Jasmine placed second right behind her older sister who won first while her brother took third. Jasmine’s first trophy was almost as big as her. She was immediately hooked but then came another major surgery for Jasmine’s that was going to prevent her from sparring from for the next couples of months. Instead of stopping their weekday training all together her father decided to switch schools and put Jasmine and her siblings into a contemporary Kung Fu school to learn Wushu and focus on their athletic ability and mastering weapons for awhile. As before, Jasmine and her siblings excelled quickly and were being taught by the head trainers and Shaolin monks from China.

During the years to come, Jasmine and her siblings would have the honor of training under many extremely skilled martial arts masters in many martial arts styles such as Krav Maga, Muy Thai Kick Boxing, Kajukenbo, and Kenpo Karate to name a few.

For tournaments and performances Jasmine and her siblings have always relied on their father to get them ready. “Make yourself very well rounded. Let’s all bring back what we have all learned and put it together in a way nobody has ever done or seen before.” Her father’s training and philosophy yielded Jasmine 10 National and 8 World Martial Arts Titles. Some of Jasmine’s most favorite memories in life will always be their family’s demo team and fight sets that they performed as a family at Disney and all across the country. Her father made weapons, created music, trained them, and coordinated their performances. Her mother prepared uniforms and covered logistics. Jasmine and her brother and sister trained and performed alongside each other. This was Jasmine’s life growing up and she loved it. 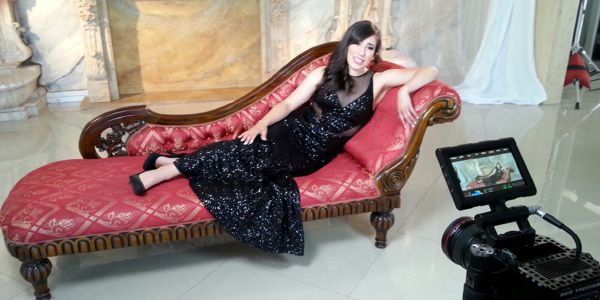 Jasmine is a born performer that also loves to sing and act. In 2012, she had the honor to study acting under T.V. and Movie Legend James Hong and his daughter April Hong.

After uploading a couple of music videos, it caught the eye of Movie Director and Martial Arts Master Art Camacho. In 2014, Art Camacho invited Jasmine to Hollywood and offered to direct her next music video “Beautiful” a rendition of Christina Aguilera’s hit song. After the video shoot, Jasmine was offered a movie role by Hollywood Producer Al Bravo. Jasmine accepted and found herself back in Hollywood a few weeks later filming her part in the action-suspense movie “Assassin X” which was released in 2016.

In 2016, Jasmine released a very special music video “Say the Words I Say.” This is a song her father wrote about Jasmine’s life and is extremely meaningful to her. Jasmine was honored to have such great legends in this video such as legendary Christian Musician Mark Kenoly (played bass for Dove Award winning album Promise Keepers and for Rose Royce), Great Grand Master Allen Joe (personal friend, workout partner, and weightlifting trainer of the legendary Bruce Lee), World Renown Bible Teacher Pastor Paul Sheppard, Multi Martial Arts Hall of Famer Sigung Bob Gomez, her World Champion and three-time martial arts Hall of Fame brother Anthony Magallanes Jr., and her beautiful and loving mother Linda Magallanes. This song and video was written, directed, produced, filmed, and edited by her amazingly talented father Anthony Magallanes and this music video will always be extremely special in Jasmine’s heart.

Jasmine loves to praise and worship God through song. She joined the Destiny Christian Fellowship choir “Voices of Destiny” in 2015 and has been with the choir ever since.

Life Out Side the Martial Arts

Growing up with a “Can Do” attitude, Jasmine tries to bring that principle into all aspects in her life. From being the captain of her high school varsity gymnastics team to getting her AA degree and graduating with highest honors in Communication Studies in 2013. At the time of this writing she is also pursuing her degree in the Spanish Language. Jasmine continues to bring the “make yourself very well rounded” philosophy into the other aspects of her life and has had a wide range of job titles and experiences which include:

Martial Arts Instructor: Where she went on to direct and develop her own Martial Arts Wushu Program for children in Pleasanton, CA.

Public Speaking and Debate teacher: Where she traveled around the San Francisco Bay area teaching children confidence and how to be successful in debate tournaments. She was also contracted to develop, create, and film a series of teacher’s training videos on the instruction, teaching, and philosophy of how to be a great and effective teacher.

Music Teacher: Where she worked with “Music Together” teaching family classes for children from 0-5 years. She was able to be her goofy-self while leading the class singing and dancing to children’s song.

A Legal Assistant: Where she worked with “Homeland Security” to obtain work visas for Foreign Nationals to reside and work in the United States.

Administrative Global Coordinator: Where, at the time of this writing, Jasmine travels around the globe and coordinates various technical non-profit organization events.

Jasmine is grateful for having such amazing parents, family, and friends and wishes to promote confidence and positivity all over the world. For more information please visit: